This week I visited the Manatee Village Historical Park located in Brandenton, Florida.  It was a rainy day, but I thought it would keep most people away and I could duck into the buildings while it was raining.  My plan worked well and I enjoyed visiting the various buildings at this location.  I visited the train first as I figured it was about to rain and not yet raining - known as "Old Cabbage Head".  Interesting old steam engine, a quick snap photo, with the thunder rolling in the background!  Old Cabbage Head was built in 1913 by Baldwin Locomotive Works of Philadelphia, Pennsylvania.  The engine was originally built for the Taylor County Lumber Company in North Florida and used to haul timber.

My next stop was at the Stephens House.  A nice cracker gothic style home built in 1912 by Will Stephens family from pine trees on the family homestead, established in 1894 in what was Manatee County, but has since become Hardee County.  This particular house I did not get exterior photographs as it was raining.  The room to the immediate right has an organ among the furnishings.  As for the little cow on the organ, I forgot to ask what the story is behind this because they appear to be in every building - just a matter of finding them. The rain let up, I headed over to the old court house building quickly before the next rain set in.  This building is Manatee County's first Courthouse, built in 1860.  It is the oldest building in the park and the oldest remaining building built as a courthouse in the entire state of Florida! 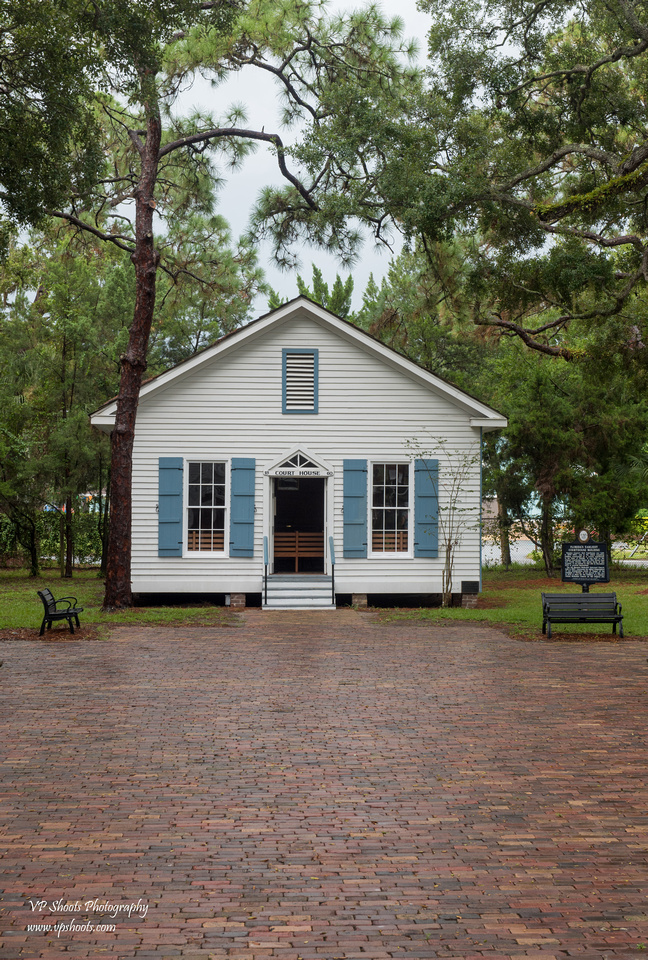 As I entered the small courthouse, I realize that is is not a large building - the benches are just inside the doorway and behind the judge's desk is a room on the left and another one on the right. The interior of the courthouse (taken with a wide angle lens to try and get most of the interior in the photograph).  The doorway on the right appears to be a 'law room' as it has several books.  The room on the left has desk/table and chair. This courthouse was built for $700.  In today's world, I am wondering if we could get a small shed built for that price?  I spent a good amount of time in the courthouse as it was raining very hard along with thunder and lighting.  Eventually, it let up and I ran over to the old school house building which was closest to the courthouse. As I watched the rain fall, I looked out through the windows and the doorway to determine where I wanted to dash to next.  There were several buildings nearby, but none appeared to have shelter where I could get indoors (I didn't get to visit any of those).  My next stop was the church also known as the "old Meeting House".  This is a view of the church from the doorway of the school house. A view of the church from the doorway of the court house.  You can see that everything is wet, and at this point I think I was the only visitor at the park.  Eventually a few families did come to visit as they are open 2 Saturday's a month (2nd and 4th Saturdays). The interior of the church is simple, yet functional.  The church is available for weddings if you're interested!  The grounds of this park are beautiful with all the large old oak trees and brick walkways. This concludes my tour of this historical park.  Another trip sometime in the future will potentially allow for visiting the other buildings as well as the old cemetery I eyed through the rain. The old cemetery appears to be the "1850 Manatee Burying Ground" and is associated with the village.  If you want to explore it, you must ask for the key at the gift shop or the park office located on the second floor of the Wiggins Store - so it is locked and secured.

A donation is asked to help support this historical park, but no fee is required.  The historical park is pet friendly, but with the impending bad weather and no animals in the buildings themselves, I left all my furry friends at home in the air conditioning.