This week we visited the Tampa Firefighters Museum in downtown Tampa located at 720 East Zack Street.  As we approached the building, we saw a beautiful mural painted on the wall for the museum.

This mural is painted on the north side of the building.  The building is the first actual fire department building built as a fire station in 1911.  It's made of brick and sits across the street from the new fire station.  As we entered the building, I first notice this small fire engine.  This is not a real fire engine, it appears to be a piece of artwork created sometime ago and is now spending it's days welcoming people into the museum. 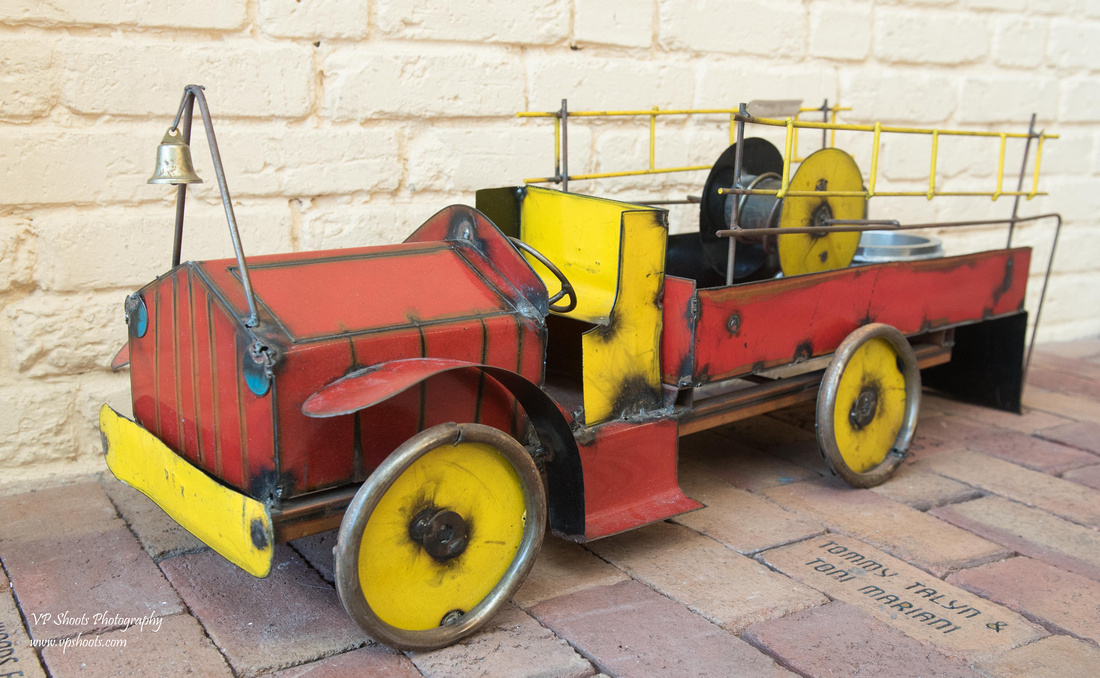 Jim looked up and noticed this flag created out of old fire hoses.

The next thing we noticed (Jim more than I) is that there appears to be a lot of noise coming from inside the museum.  Well, guess they are busy this Saturday morning.  A young man came out of the museum store next to where we were standing and let us know they have a child's birthday party this morning (open on Saturday from 10-2).  As we went around the brick wall, there were a lot of young children having a lot of fun!  For those of you looking for somewhere to have a birthday party - air conditioned! - this could just be that place.  The children were having a lot of fun playing 'fire fighters'.

The first exhibit we viewed is the communication system for notifying fire fighters of an emergency. 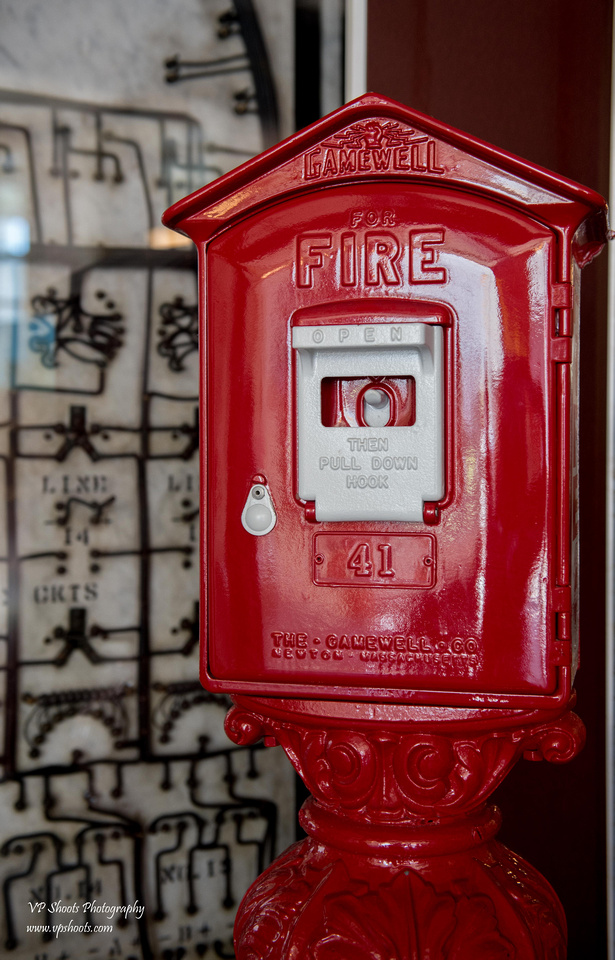 This is a pretty complex system for it's time named the 'Gamewell' after the person that invented the system.  Each box has a number (in this photo #41) and if this box is used to make the call for a fire or emergency, it sets off the appropriate alarms and they know where box 41 is located to know where the emergency is located.  If you're looking for the more technical answer on how this works you might want to visit the museum which is self guided but information is posted on a lot of signs for what the various items are.  For the Gamewell system, here's some additional information and photographs for how it works. 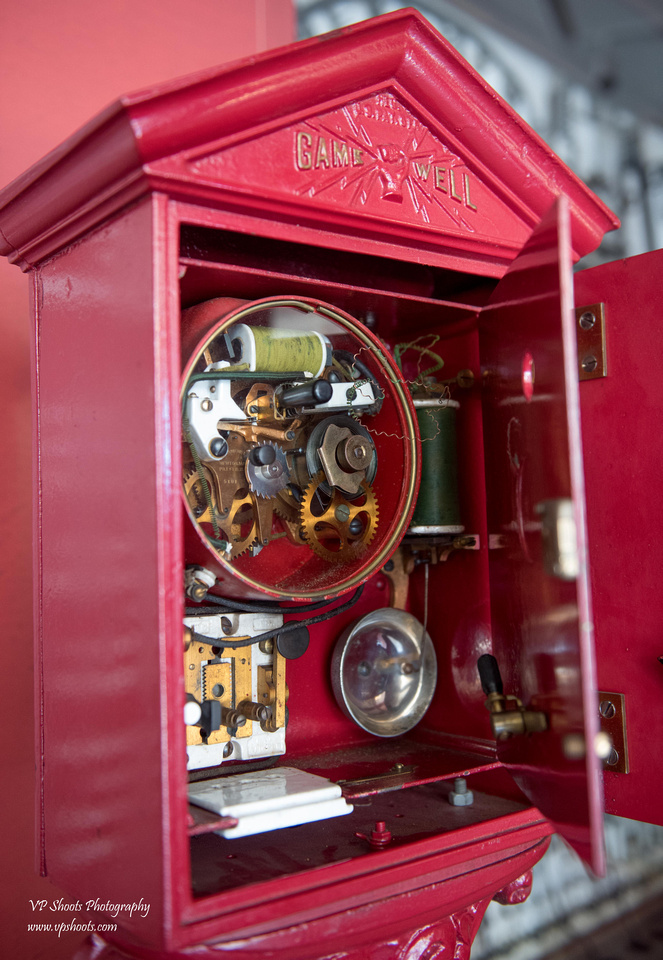 "Each box had a unique number assigned to it, such as this box, 548. A gear-like wheel inside has a series of five then four then eight teeth. When the alarm was pulled, the wheel rotates and the gear teeth break the direct current five then four then eight times. This signal was sent to the fire department’s Signal Division where it was received as a series of gongs on a bell and was also punched on a paper tape. The fire department dispatched equipment from the station nearest box 548." 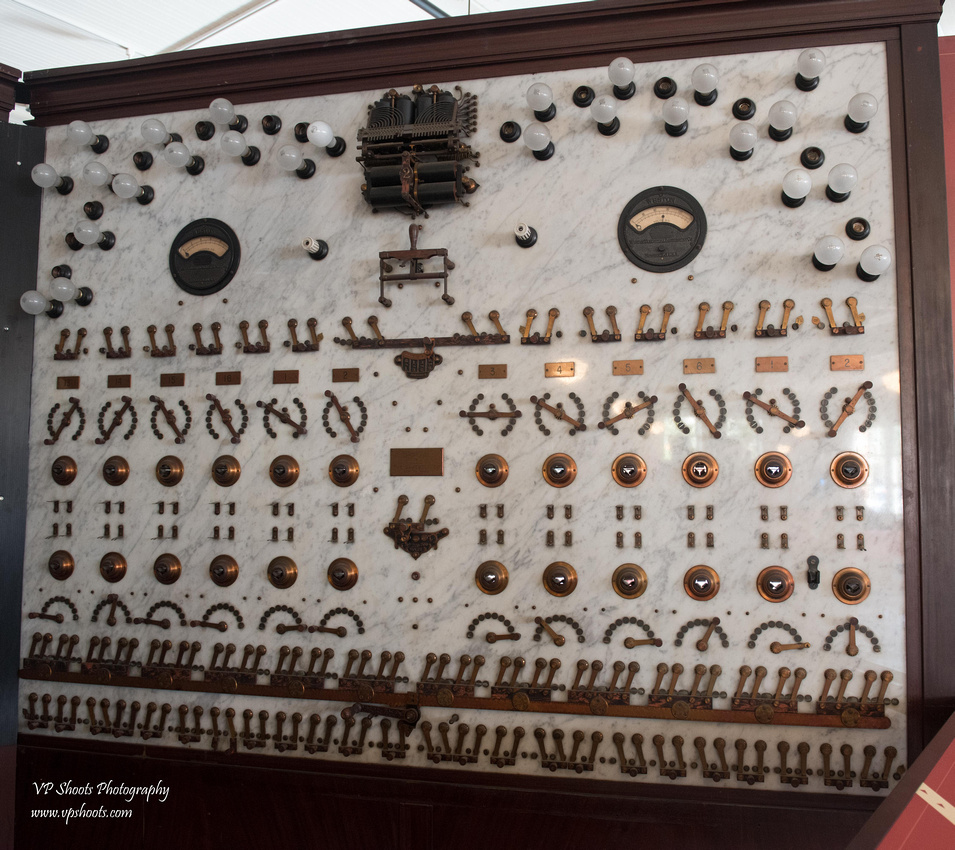 All the switches, gears, etc that are behind the scenes for when a call box is used.  The light bulbs were used to burn off excess energy.  On the back side of the above board is all the wiring for each of the lines - this is a closeup of the wiring for line 11.

These fire boxes resided in Tampa until 1981 - and grew to 300 boxes in total before being replaced with newer technology.

They have two fire engines on display in the museum, the oldest is the "Mack" shown below - very well polished and cared for. 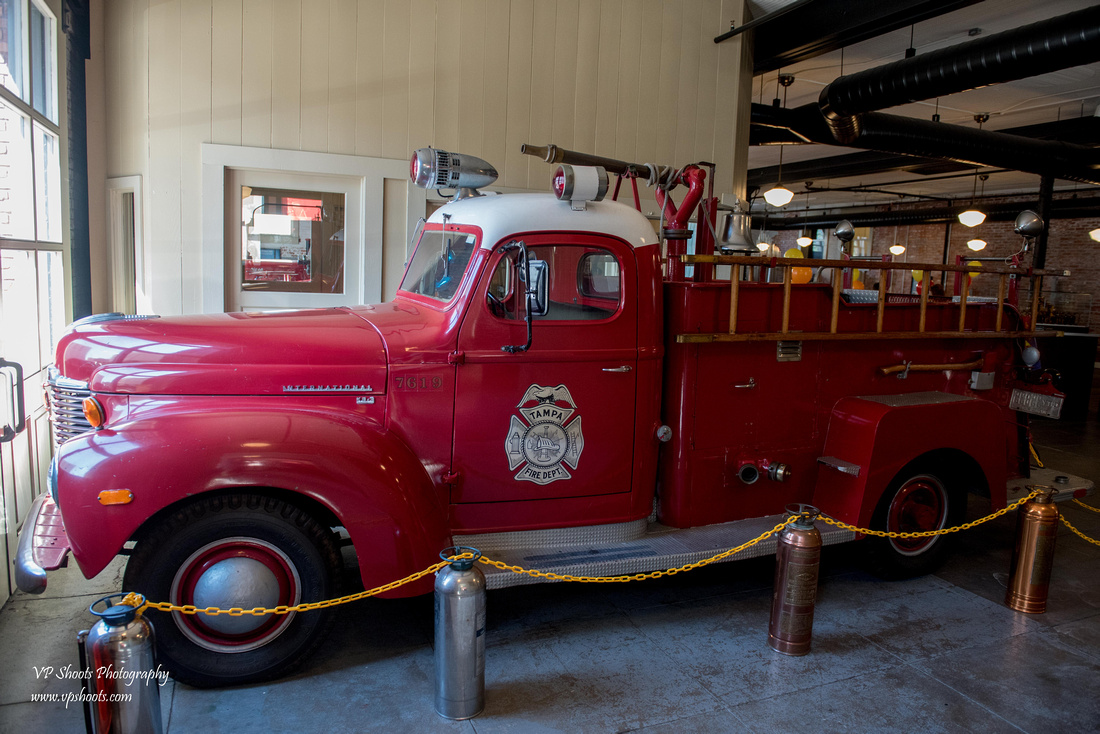 The other fire engine is more recent in time. 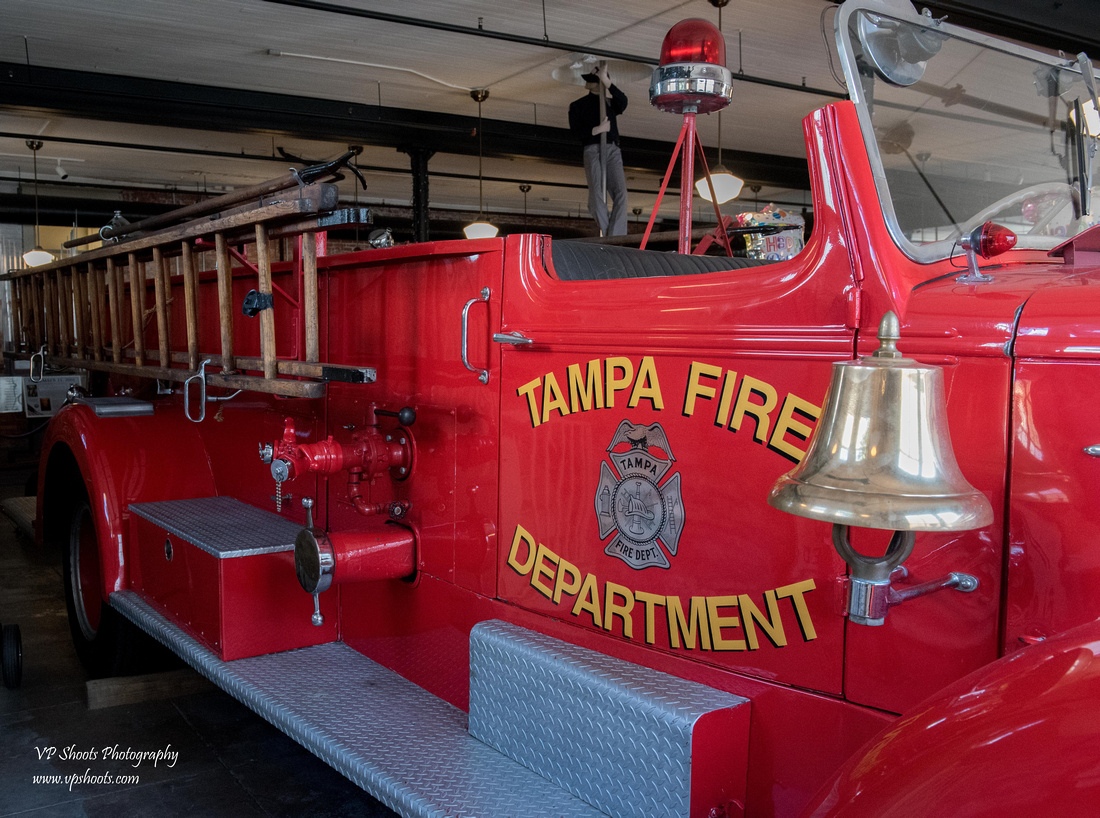 They have exhibits of some of the earlier fire equipment before fire trucks (hose & reel) - but for some things, you should make a visit to the museum and enjoy what has been made available for all to see.

If you go upstairs, it is where the fire fighters dorms were located.  Today, it is primarily open space with no exhibits but does show that there were 5 fire poles from what I could see and one is still set up so you can see how it worked.  This photo was taken from the second floor looking down to the first floor. If you look close in the photo above, you can see the 'fire fighter' coming down the pole. 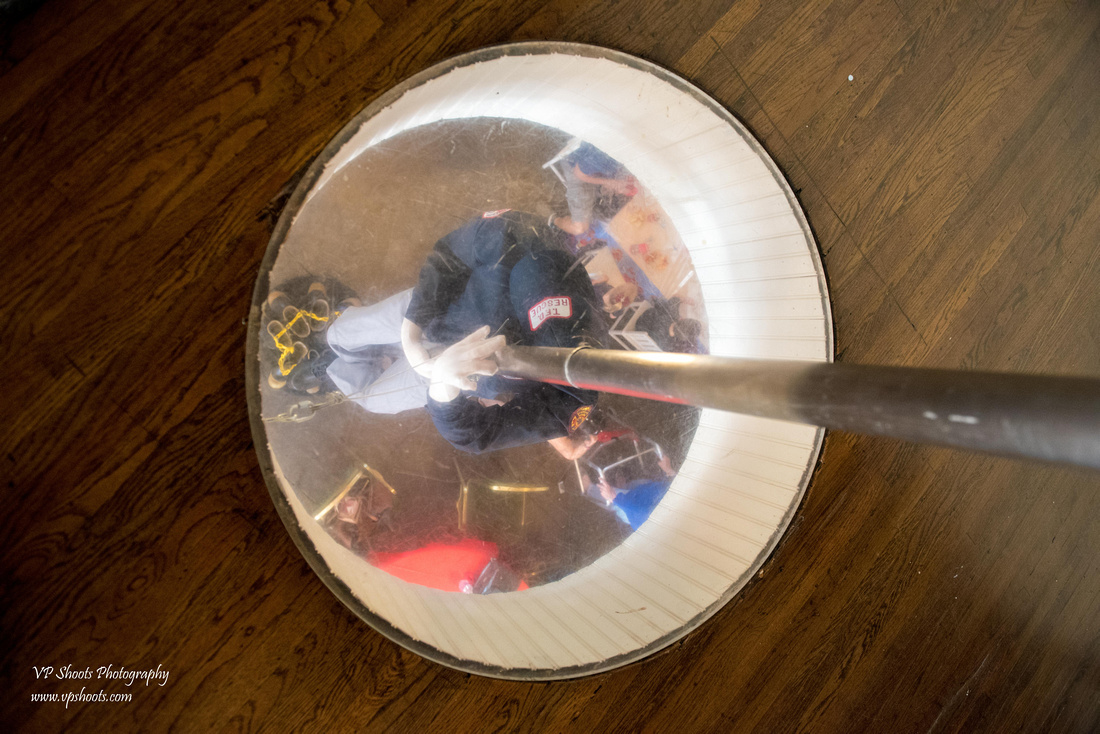 As we are getting close to the 17th anniversary of the September 11, 2001 incident, it is remembered at this museum.  This exhibit includes a fire fighter helmet that was gifted to the Tampa Fire Department.  For those that were part of NYFD, they visited Tampa shortly after the disaster and donated the helmet.  This was one (if not the first) place that several of these fire fighters visited after they completed the rescue. 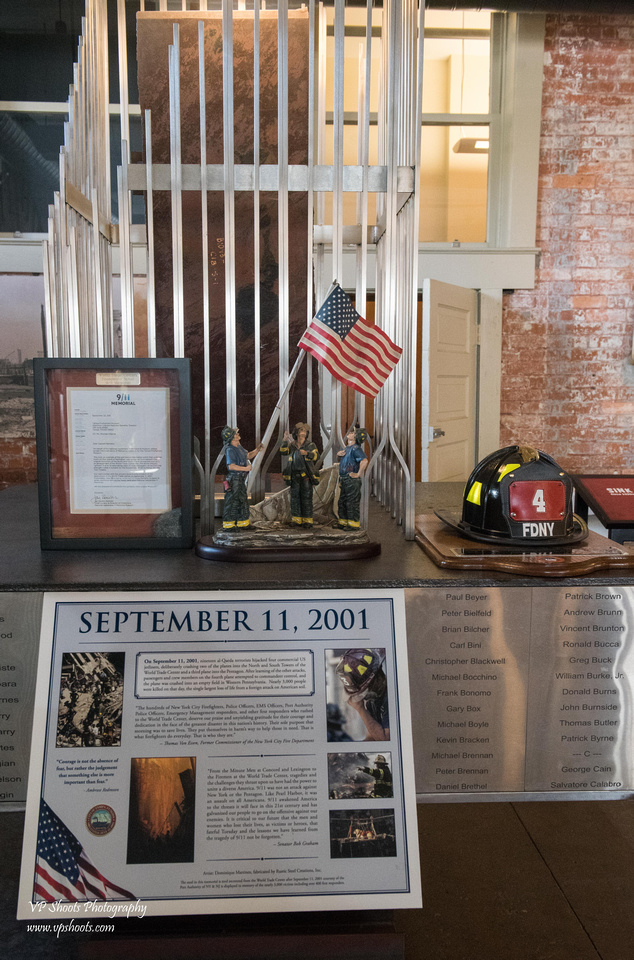 As for Tampa, it had several large fires back in the early days of fire fighting.  A catastrophic Ybor City fire occurred on March 1, 1908 that made news in every major newspaper across the country with mass devastation of Ybor City.  Over 300 buildings lay in ruin after this fire and thousands of people were homeless and unemployed as a result of this fire.

A small newspaper is available at the museum called "Florida Burns 1890-1920" providing several different articles about early fires in Florida.

This is a great museum to learn about the history of fire and fire fighters.  The museum is free, but they do accept donations.  If you have some time, and an interest in history, take an hour or two and visit this well done museum at 720 East Zack street - I think you'll enjoy it!