It's the holiday season and many different Christmas events are occurring in the Tampa Bay area.  Last night we joined a lot of people and visited the "Christmas in the Wild" event at Lowry Park Zoo. It's been a number of years since we have attended this event and it has changed quite a bit!  Christmas in the Wild now allows you to visit many of the animals at night time. I have no idea what the monkeys and other animals were thinking about all the people wandering around in the dark with colorful lights.  We parked in the overflow area across the street in Lowry Park before walking over to the zoo at dusk.

Upon entering, we see the large decorated Christmas tree.  It's not yet dark when this photograph was taken but all the lights are glowing on the tree. 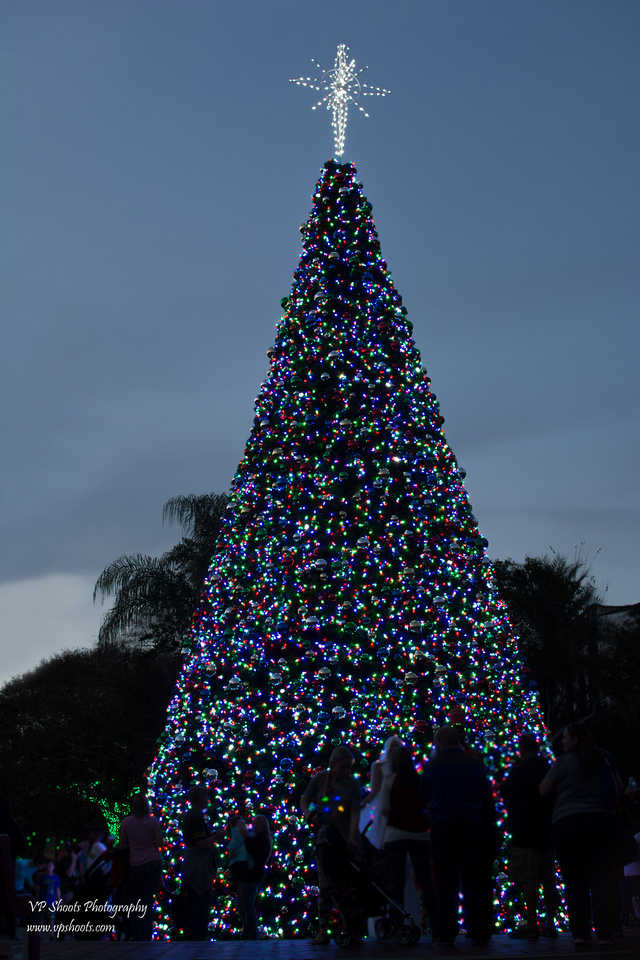 We headed over towards the right.  Just outside the merry go round, the lighted deer are featured. 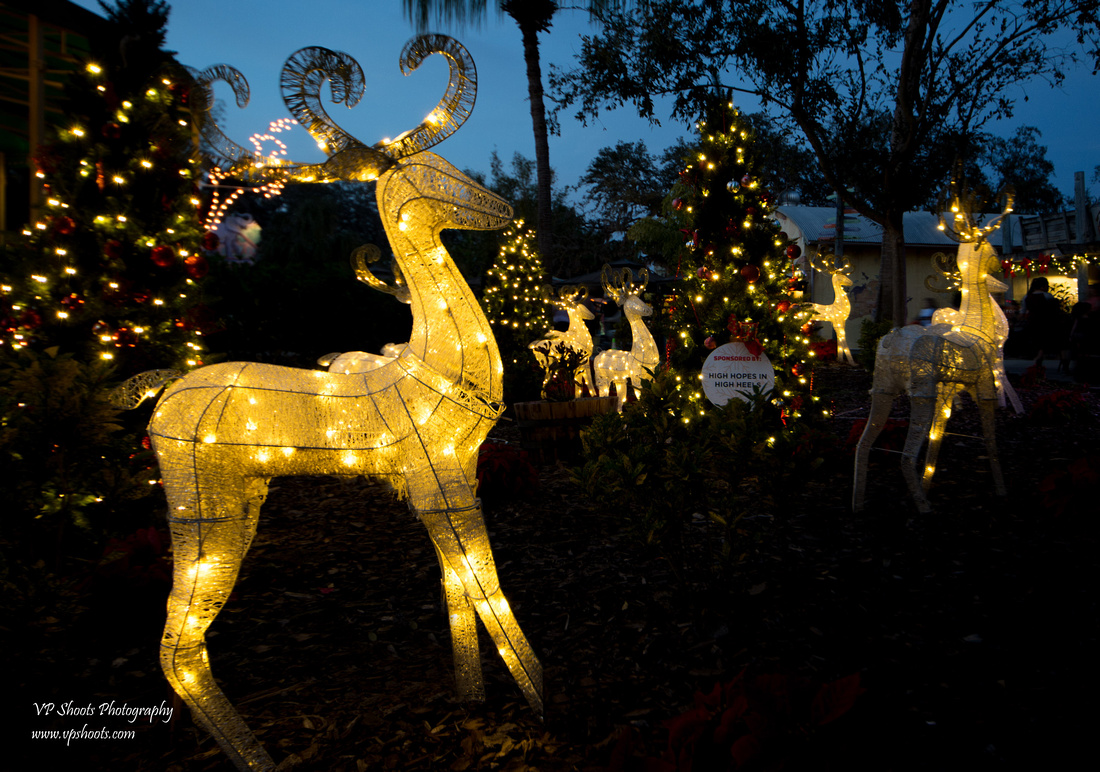 Upon entering the children's area, we see lots of beautiful lights covering many of the trees. 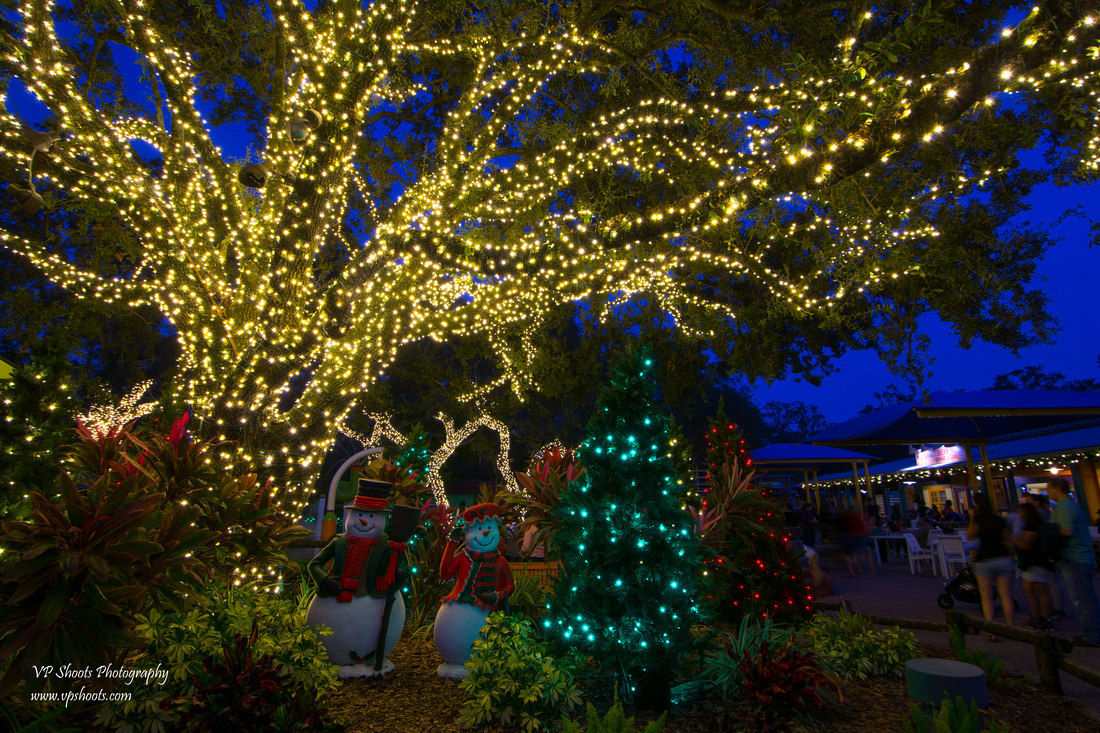 The children's train ride exit is featuring green and white lights.  In order to capture the photographs with minimal people I used a wide angle lens to get close to my subjects.  In addition, for the below photograph, patience on waiting for people to clear out before clicking the shutter. 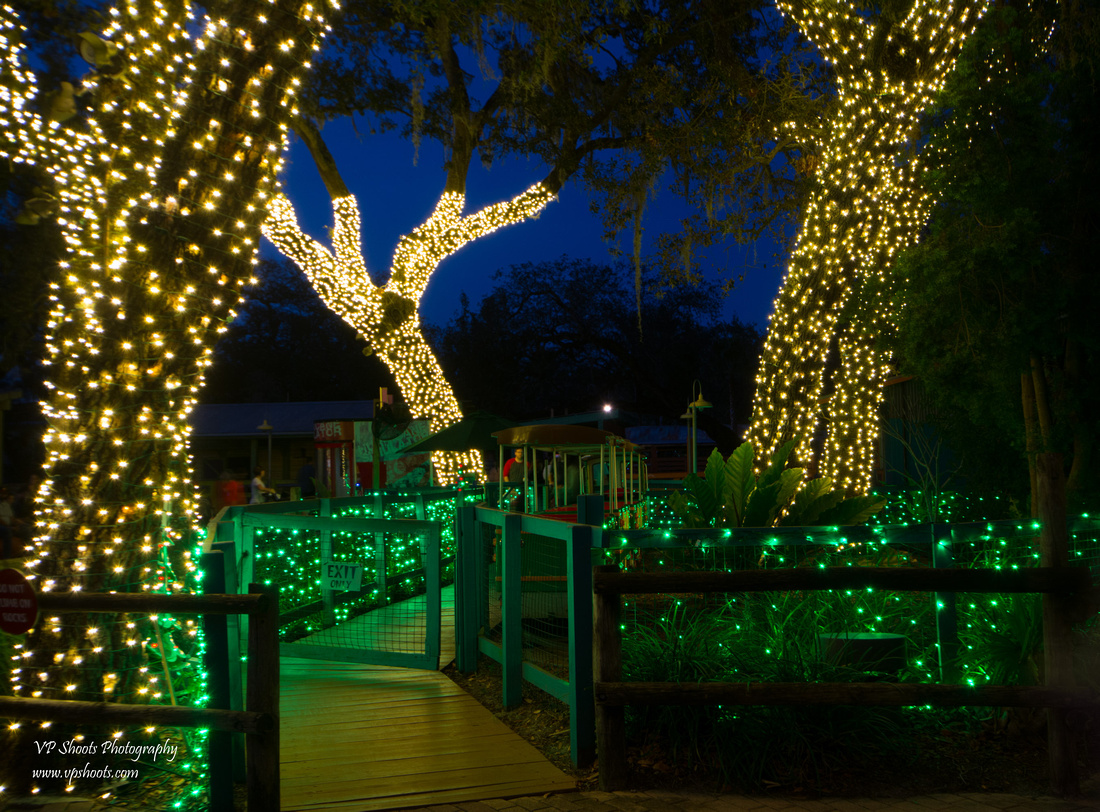 As we headed over to the Safari area, one of my favorite places to check out for photographs is the 'tunnel' that leads to the entrance to this area.  Tonight, blue lights are lighting the tunnel with large presents along the middle section.  Using my tripod, wide angle lens and slow shutter speed (20 seconds), I captured several different photographs allowing the people walking by to blur.  If the object moves through your photograph and does not stop it will be a 'ghost' effect if it appears at all.  The only people that appear in this photograph are at the far end of the tunnel - they didn't move through the tunnel while the shutter was open, so they are captured as 'ghosts' in the image.  So, yes, there were people constantly walking through this tunnel while I was photographing (in case you were curious). 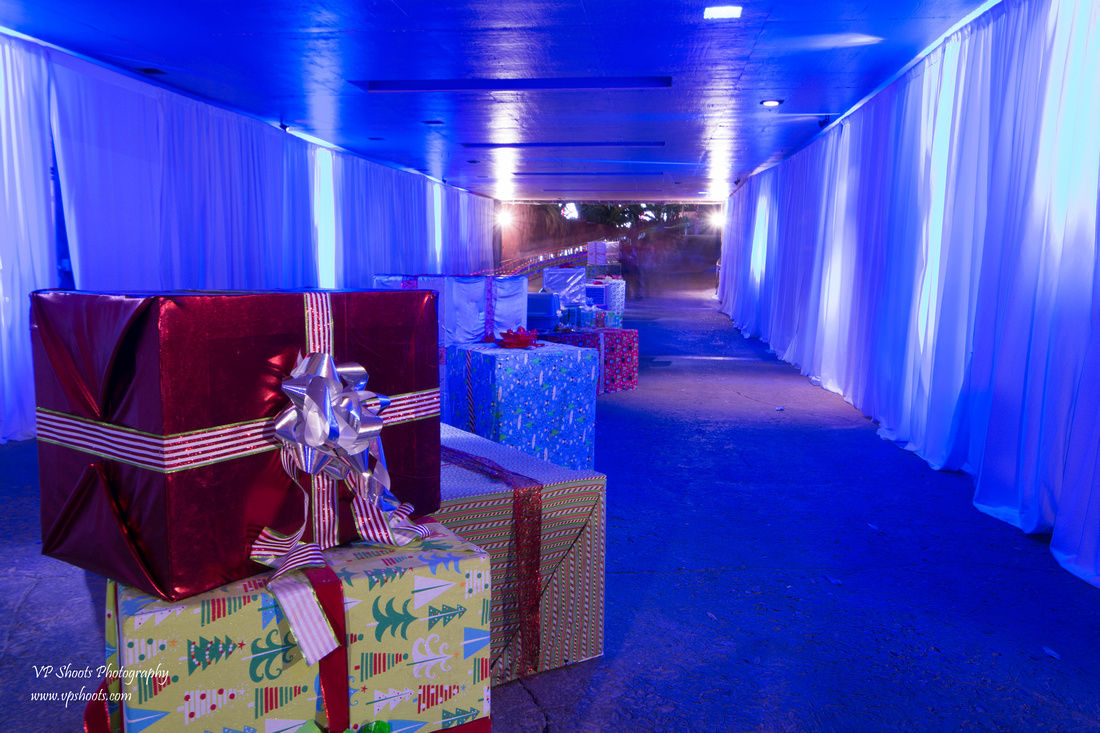 After walking through this area, we decided to head over to "Santa's Village" which is on the other side of the zoo.  As we approached, the lights are pointed on the large oaks giving them a cold winter look.  Here's a photograph just before we entered Santa's Village. 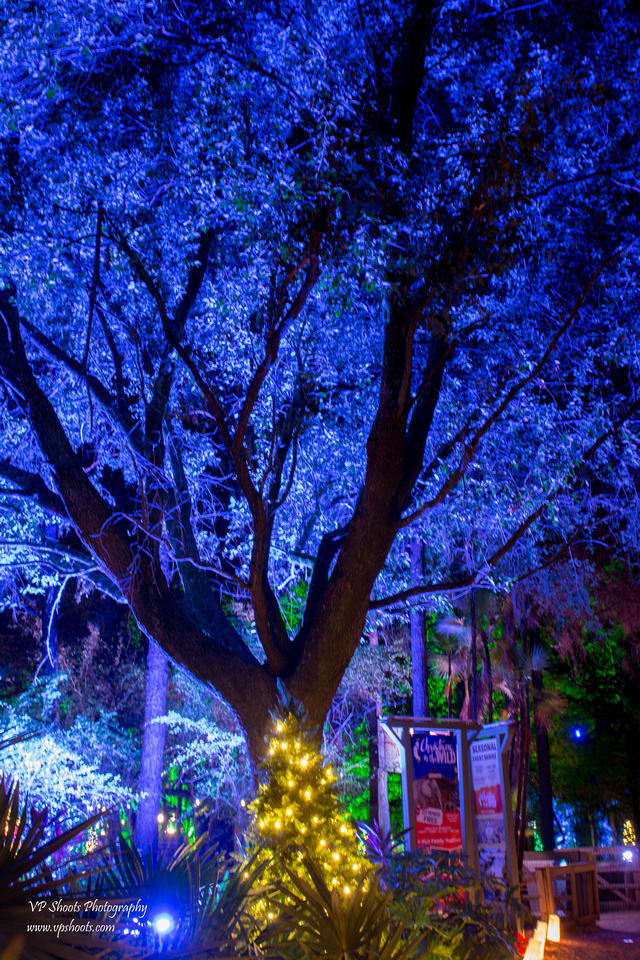 The pathway is lit by lights along the way on either side as well as a string of lights in the middle up high.  A star effect on the lights above is created by using a small aperture (f/16) - this effect will vary based on the lens used to capture the photograph. 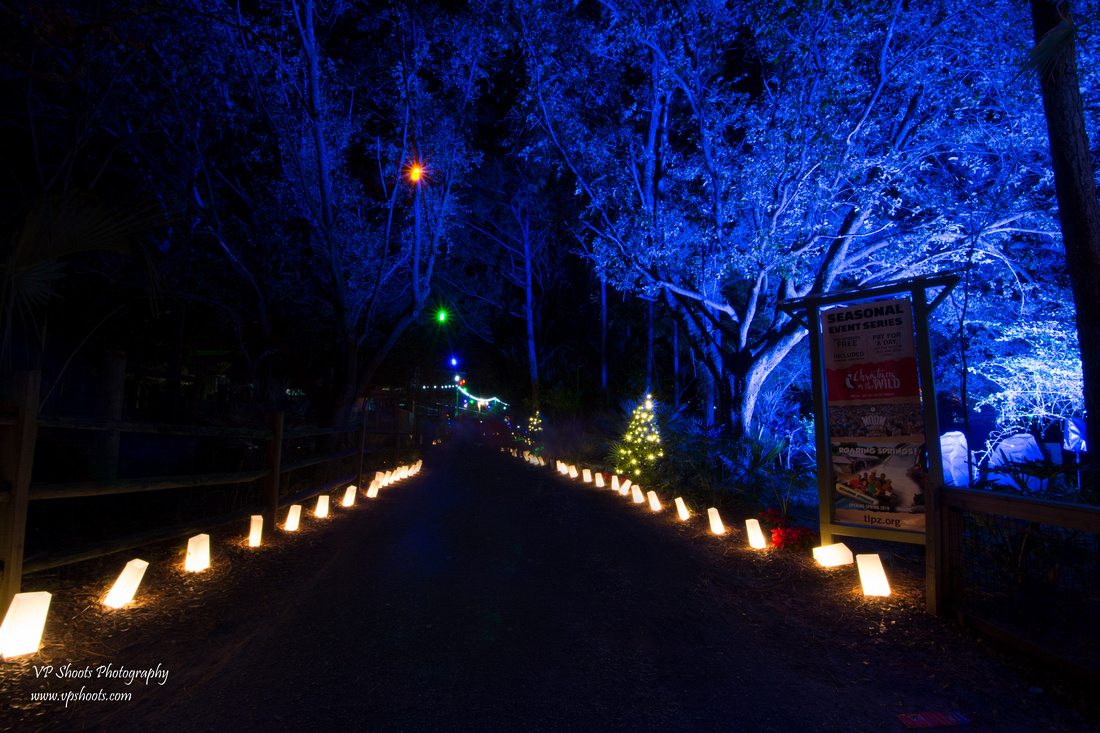 We stopped to get some hot cocoa and cookies next to this building in Santa's Village - it was good, but not cheap 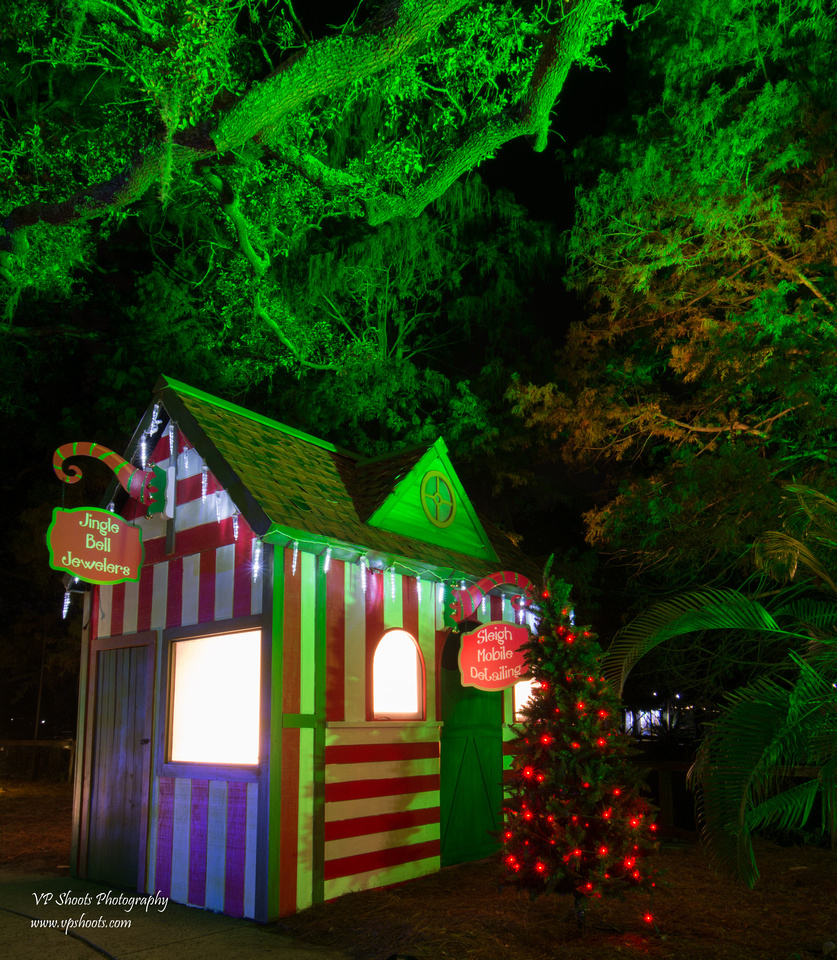 More trees with a winter look utilizing lighting on the trees.  Several areas in Santa's Village had 'snow' which is flying around (it appeared to be some type of 'soap suds'). 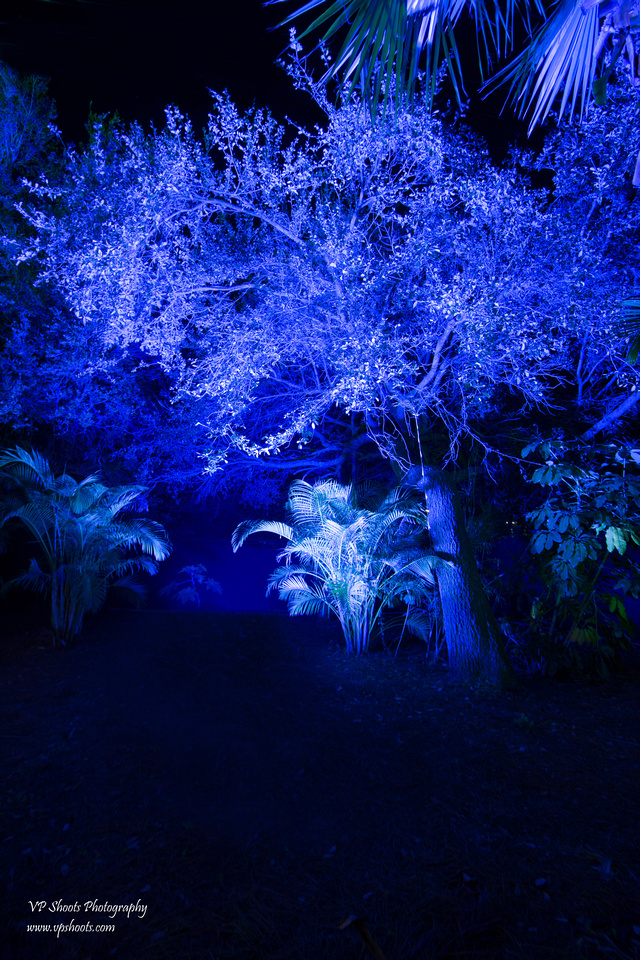 A colorful Christmas tree decorated with a yellow star on top. 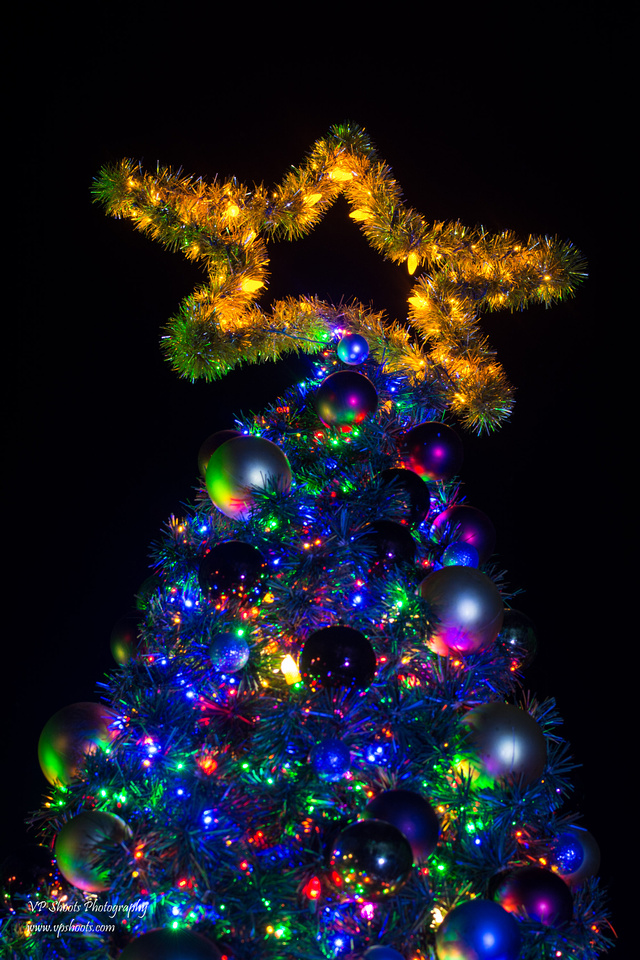 Wishing everyone a happy holiday season!