This past week I decided to check out the Little Manatee River State Park.  I've driven by it so many times over the last decade, yet never actually stopped to see what the park has to offer.  First, Jimbo found that they give out dog snacks at the entrance.  He remembers that too, because he expects it at Hillsborough River State Park too and one time they were out.  He was disappointed based on his eagerness to get one only to not get one.  This park offers canoe rental, bike rental and they can even have someone bring horses over to ride.  Sounds unique.

We headed over to a short trail called the Oxbow Nature Trail - we saw no one, it was just Jimbo and I.  A 1/4 trail with several places to view the river.  We took a side trail over to the "Steps" on the river and decided it was a good time to relax and have a drink & snack.  The river view from the steps is peaceful. 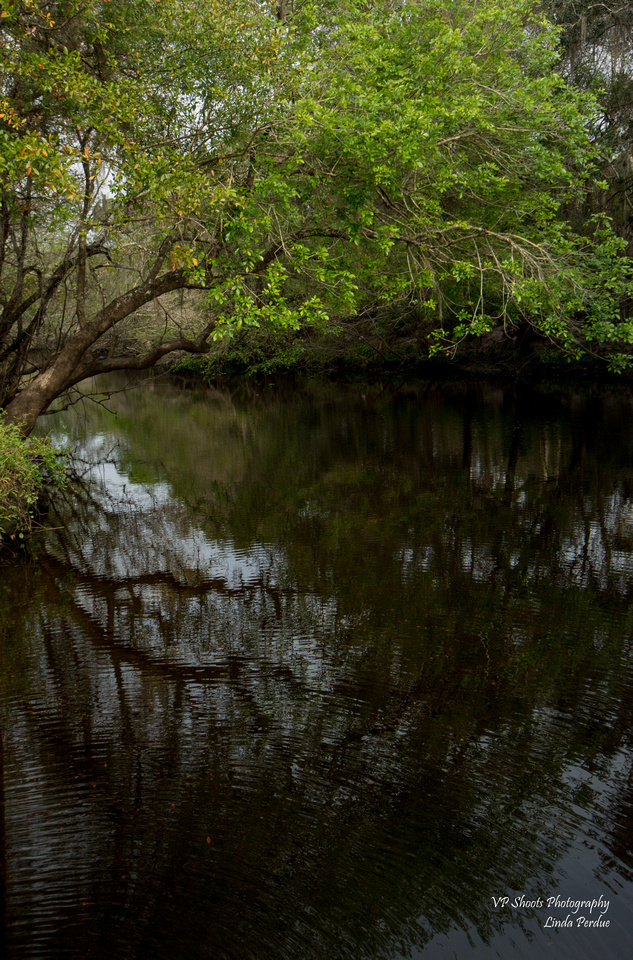 Jimbo chilling out while I am off taking photographs close by. 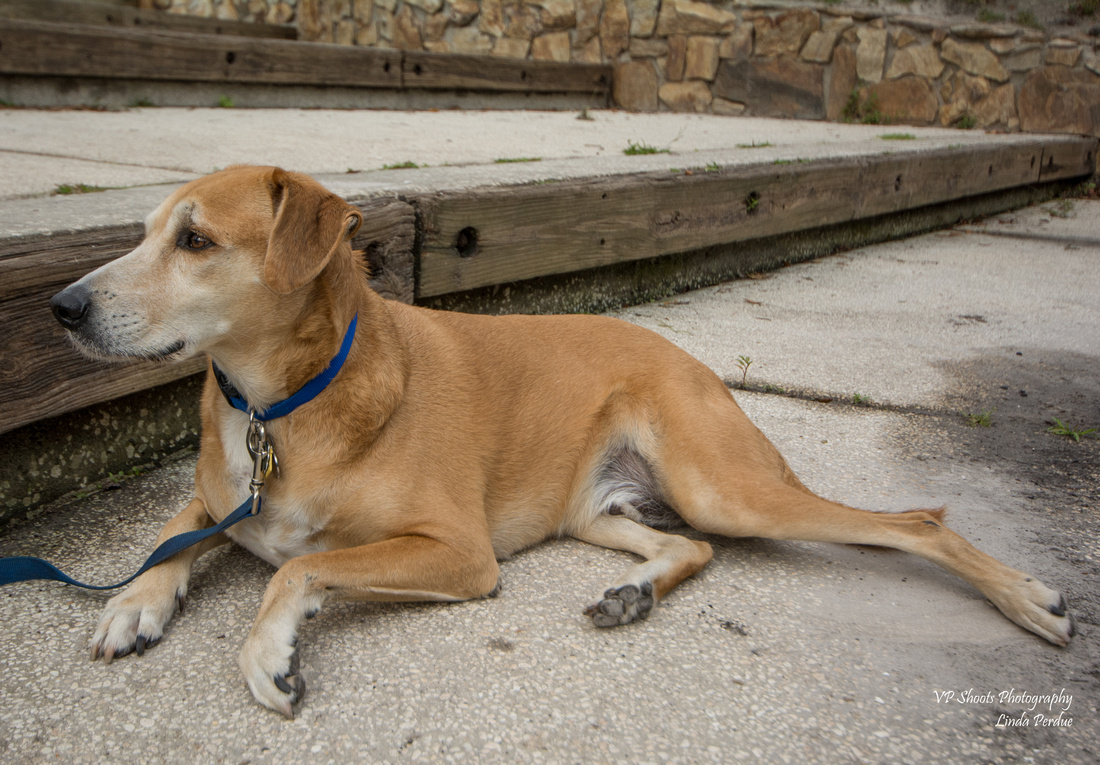 I noticed that there were ripples in the river water.  I finally got up and looked over the edge of the last "step" and saw small drops of water dripping into the river.  NOTE: This photo has been enhanced to provide the blue (cyan) look. 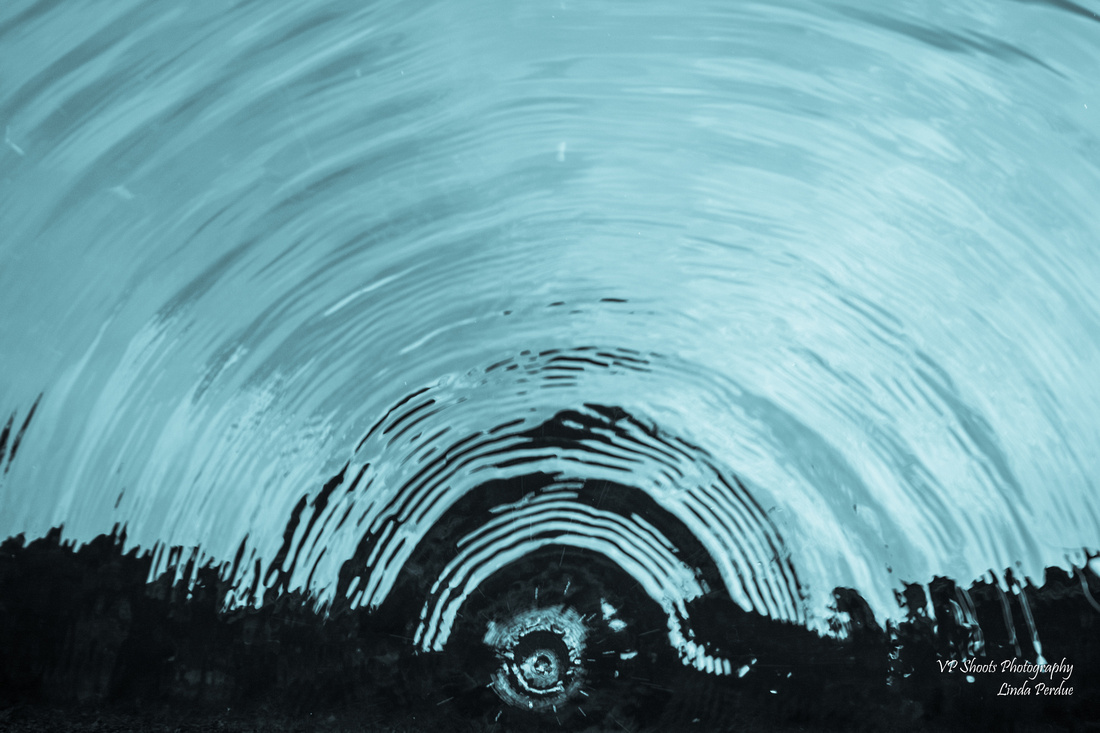 After stopping at the restroom (the only restroom are in this part of the park near the steps and/or Oxbow trail), we decided to head over to the Florida trail which is part of the park and has a parking area on the west side of Highway 301.  I asked the ranger, if you had time to do only one trail, what would it be? She indicated it would be the Florida trail - so off we went.  The Florida trail is on the other side (north side) of the Little Manatee River and cannot be accessed from the park itself as they have no bridges over the river.  In case you are wondering, yes there is a fee. 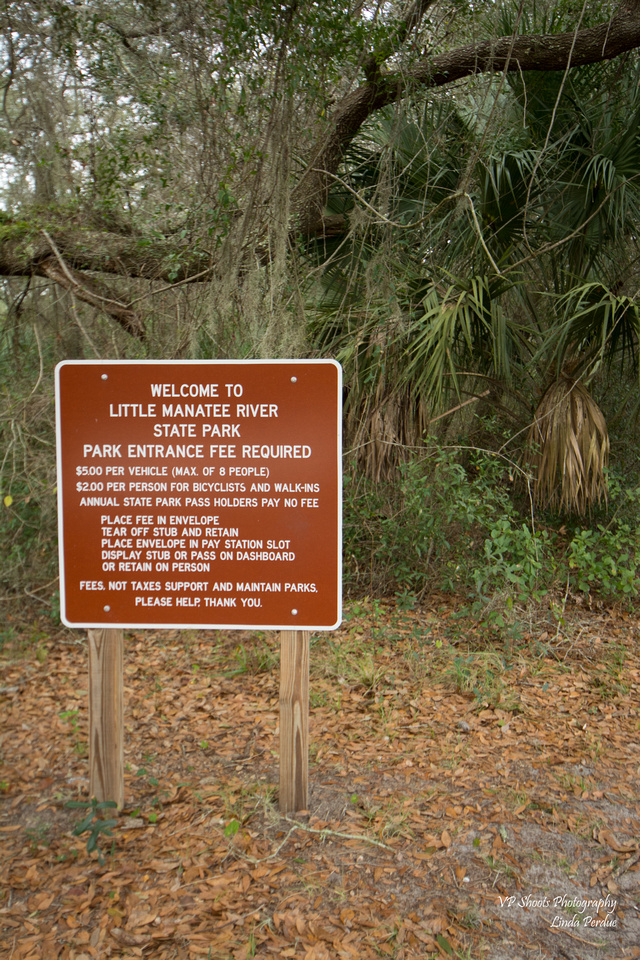 The entrance to the Florida trail. 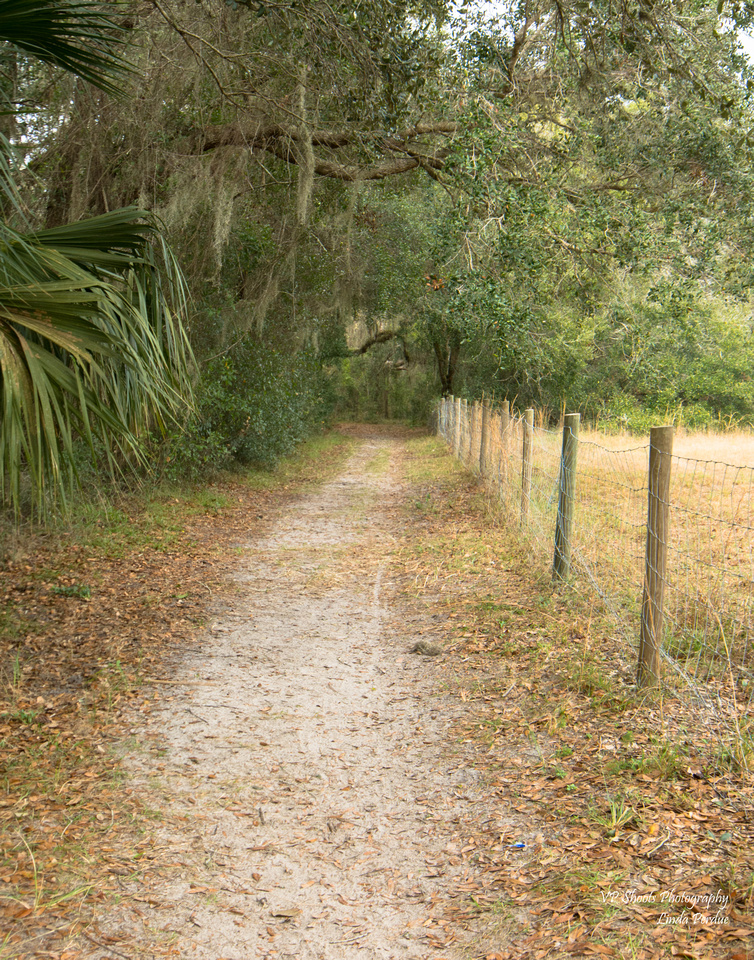 Typical Florida sand, leaves and plant life.  Jimbo is happy, he says "New territory" and he is ready to start sniffing to see who has been here before.

Almost immediately you come to a boardwalk that takes you through a bunch of ferns that are in a swampy area.  Really pretty here and it's January. 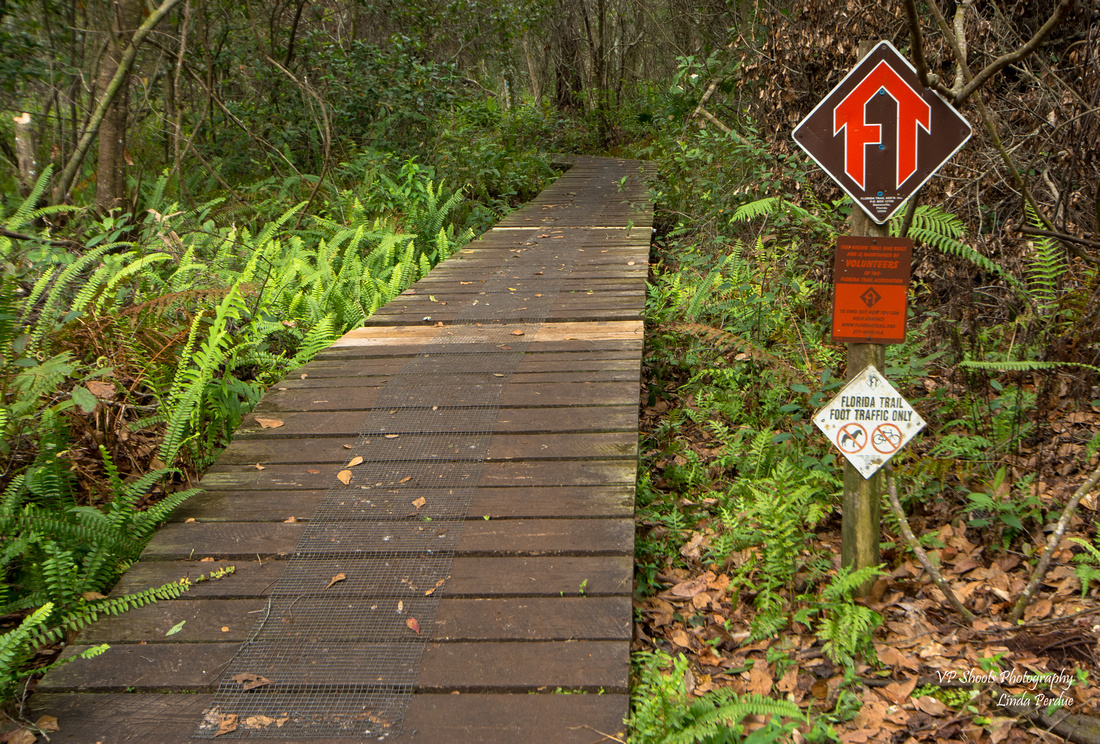 The official sign indicating this is part of the Florida trail.  A little while later there is a sign that says it is a 6.2 mile hiking loop.  Now, I know with it getting hot, and carrying about 10 pounds on my back (feels like more, but guessing it isn't) that I'm not going to make this entire journey today.  They have markers every 1/2 mile so you know how far you have traveled.

Soon the ferns are gone and we are now into pine trees.  This photograph was modified as it wasn't really that dark in the woods with a little trail lit up in the middle, but for effect I added those to make it more interesting! 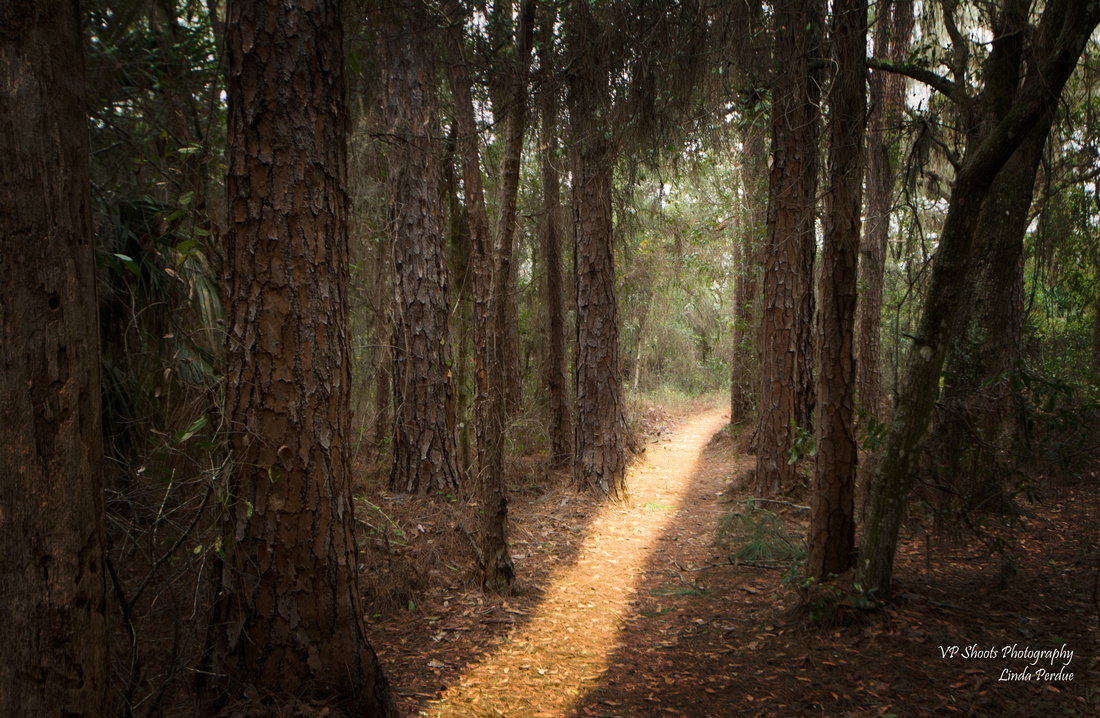 We continued on, but still no real view of the river which I was hoping for.

We came across another pine tree with a lot of dead vines hanging from it. 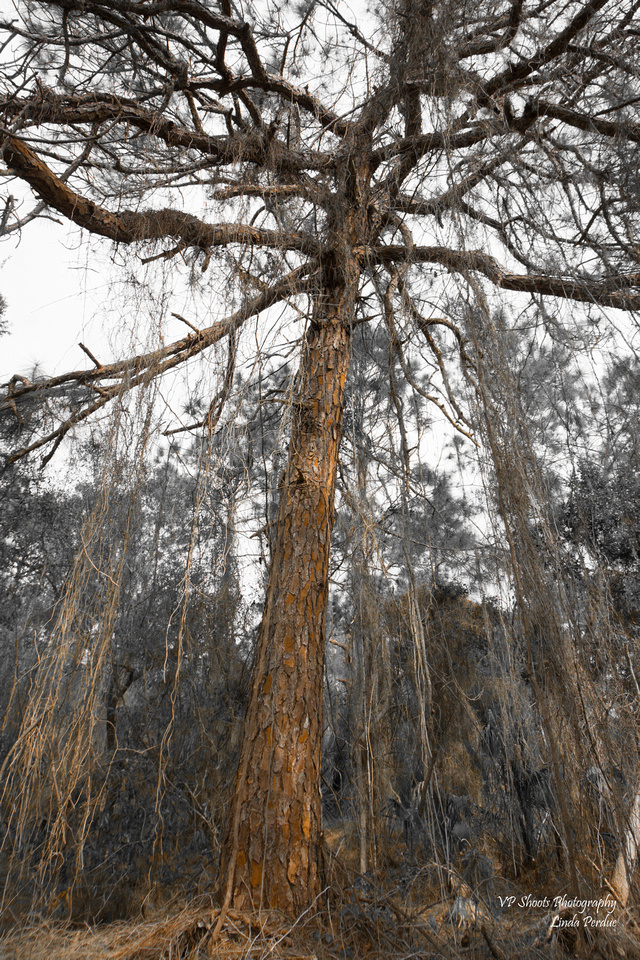 And then we continued on for about a 1/2 mile at which time we took a water break.  Time check said it was getting closer to noon and decided it was time to be heading back to the truck.  This definitely is a hike I'd like to do in it's entirety, but it should be done with less camera gear and lower temperatures.  Besides, we had dropped off Abby at daycare for 1/2 day and we wouldn't have made it through this trail before she would need to be picked up.