On the third day of our trip to South Carolina we ventured to Table Rock State Park.  The brochure promised trails, a waterfall and mountain views and opened early so we were able to get there when it was still cool.  Shortly after 7am we arrived to an empty parking lot (who hoo) and it was still a bit cool outside.  Here's the list of options for hiking.....knowing how slow we are if there are things to take pictures of, the first two trails (particularly in the summer) are out of the question.  So, looking at the shorter trails, we have several options. 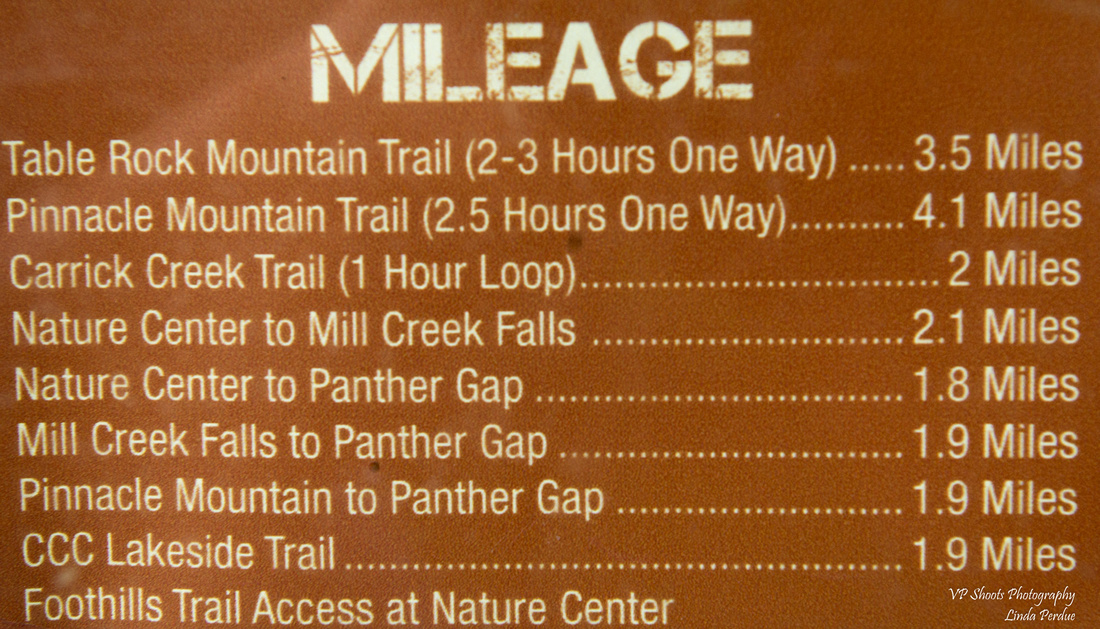 After talking with the park ranger, Ira, we decided the best trail for us to start out on was Carrick Creek Trail as it is a 2 mile loop and runs along the stream in this part of the park.  Ira told us there is a waterfall with a platform for viewing and photographing not to far along the trail and after that several waterfalls along the way that are smaller.  The trail was 'easy' compared to other trails in this park - sounded like the perfect trail for us.

We walked to the hiker trail sign in sheet which asked for the approximate time of return -- who knows? depends on how photogenic this trail is and how hot it gets!  I decided that 3 hours should be plenty of time for the 3 of us (Jim, Jimbo and I).

They have a nice platform with a small store, vending machines and restrooms just before you depart on to the trail. Walk down these stairs and you're on your way. 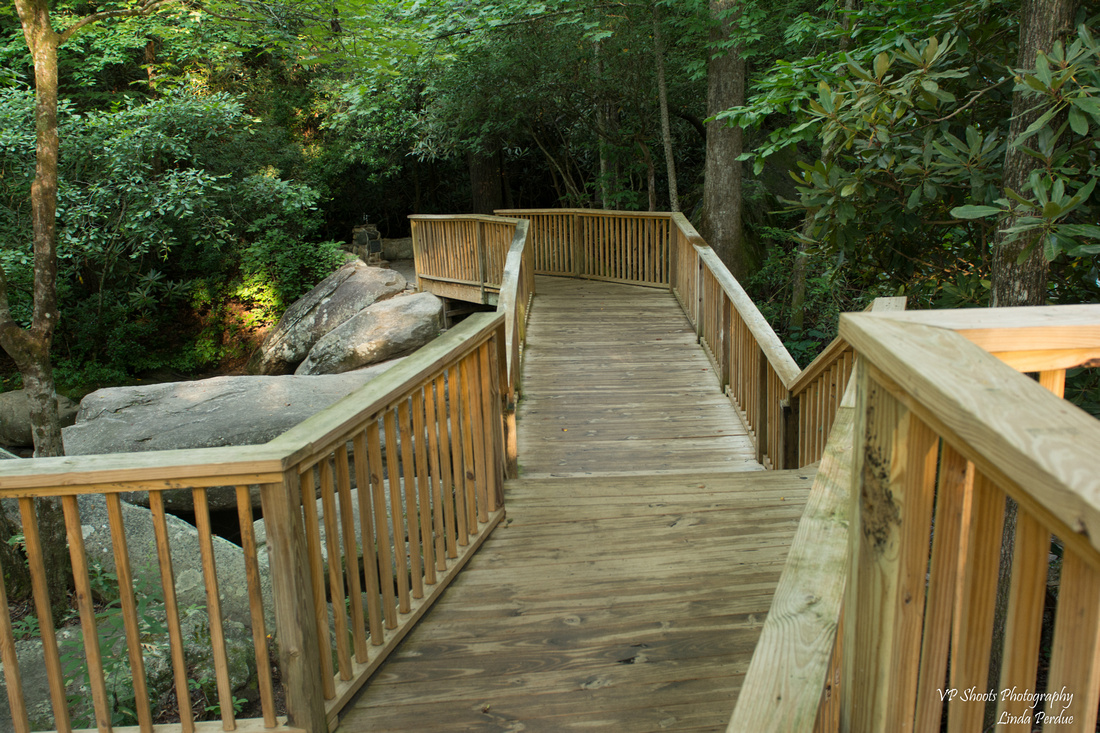 Soon we arrived at the waterfall.  We must have spent a good 30-60 minutes there just photographing and hanging out.  We had it all to ourselves for quite a while and the few that did stop didn't stay long.  Other people would pose in front of the waterfall, snap a picture with their cell phones and off they went.  5 minutes top.  How can you appreciate the natural beauty if that's all you do? 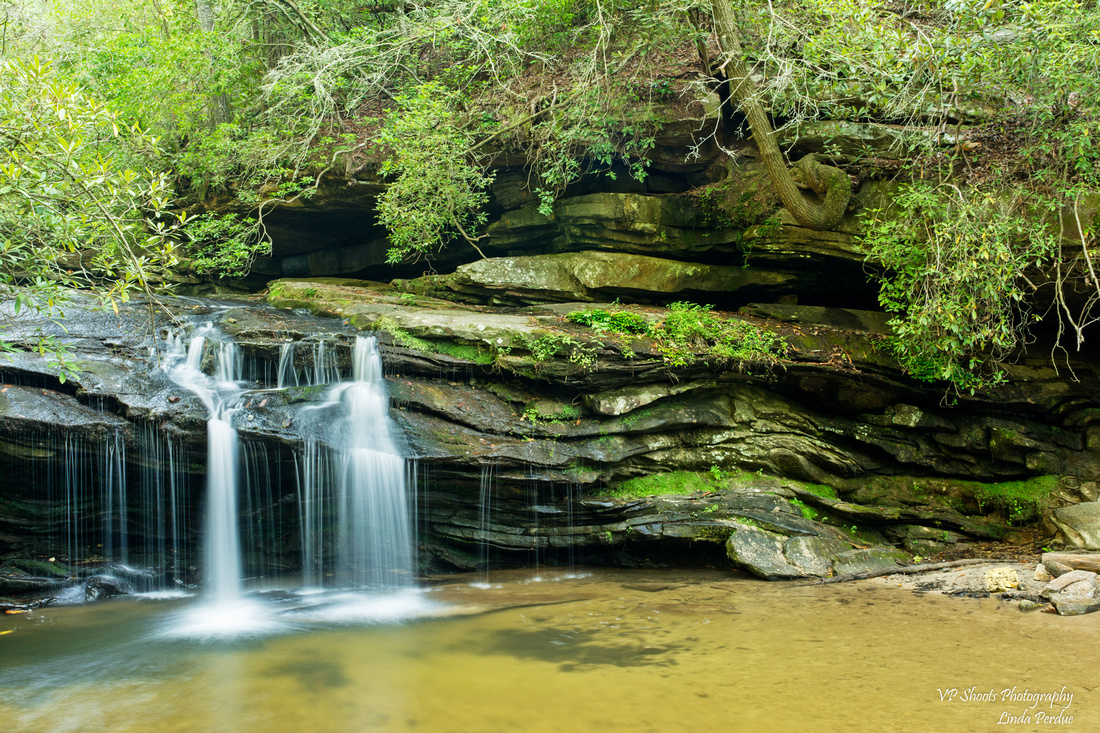 Clearly our dog has figured out what should be done. Lay down and relax! 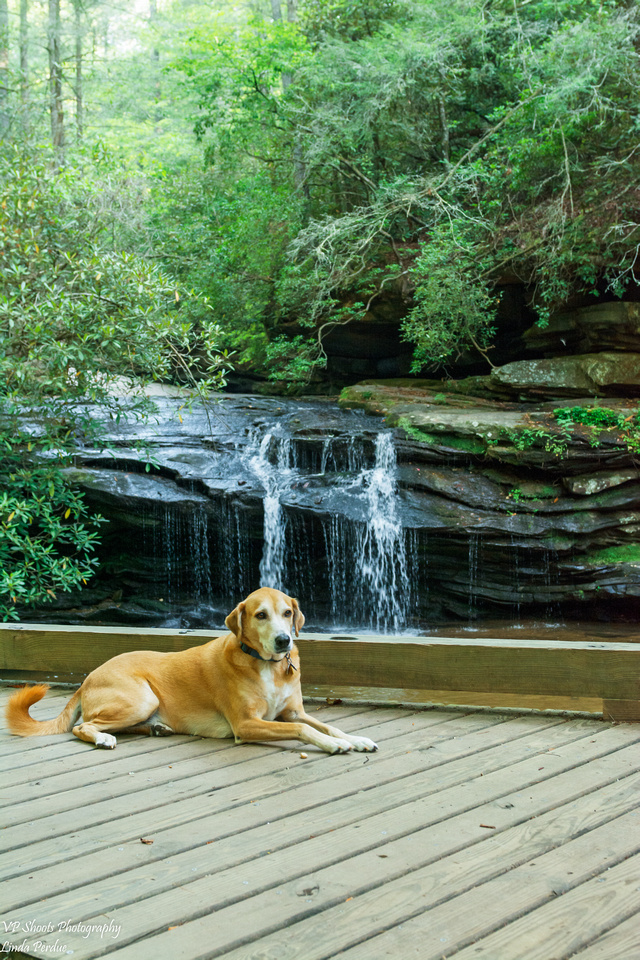 We continued on up this trail, stopping along the way to take photographs. 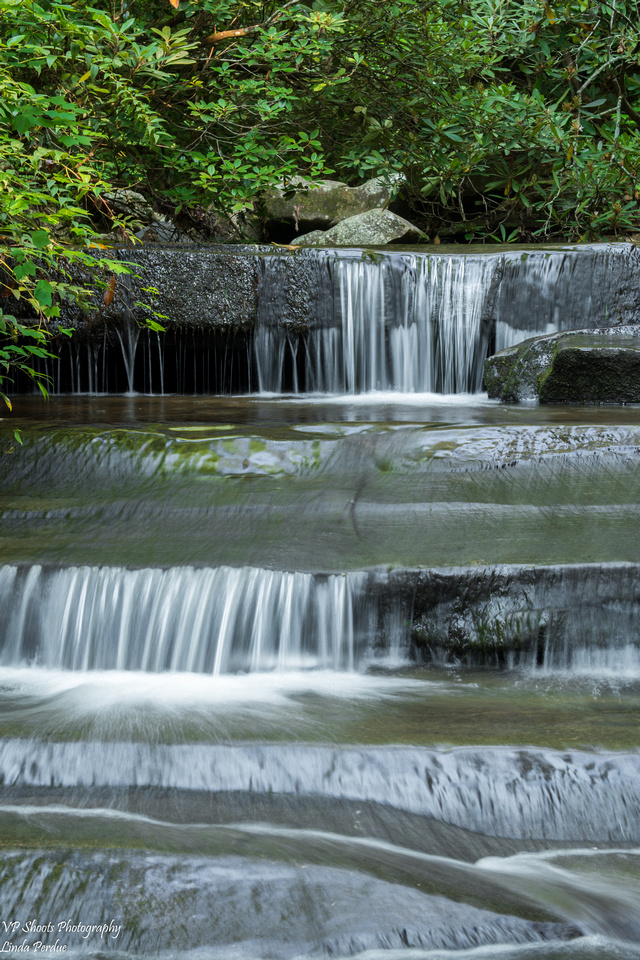 As we continued on up the trail, we began to climb stairs along with inclining trailway.  Jimbo was not liking the stairs.  Walking inclines is fine, but Jimbo is getting older in his years and stairs are quickly not on his 'to do' list.  We continued on, but eventually it became evident that Jimbo was hot and tired - we found a few people coming from the other direction.  They said we hadn't even made it to the 1/2 mile mark.  Oops, we weren't going to make this 2 mile hike.  It was getting to hot, to much time spent on the beginning of the trail.  After making it to the 1/2 mile mark, we decided to turn back as it was shorter than finishing - temperatures were already climbing into the low 90s and we only had 1 bottle of water left.

Well, we enjoyed the mile we did hike - and when we returned to the waterfall area it was now a swimming hole for the children.  They were having fun and I was happy we managed to get the pictures before it became a swimming area.  Hopefully next time we can do the trail in cooler temperatures and we can do the entire 2 miles - I'll limit the camera gear and it will be more fun for all of us.

Table Rock State Park is a 3,083-acre park at the edge of the Blue Ridge Mountains in northern Pickens County, South Carolina. The park includes Pinnacle Mountain, the tallest mountain totally within the state.  The official address is 158 Ellison Lane, South Carolina, 29671.