This week's theme for Pet Photography is "Depth of Field" - this is a concept that is used within photography to control how much of your photograph is in 'sharp' focus.  If you're a photographer (whether amateur or professional) you have probably heard this term but for those of you that love photographs and aren't concerned with how it's created, 'depth of field' is how 'blurry' the background is behind the subject.  Have you ever seen a photograph that has a beautiful blur behind the dog? Or maybe it has a beautiful scene behind the dog?  This is the idea behind 'depth of field'.

I photographed Abby against a few bushes and a painted brick wall.  This background was chosen specifically to show how the depth of field changes based on changing the aperture.  The lens used is a Nikon 70-200 set to 190mm.  Abby moved her head through out the sequence of photographs, but she remained in a sit position.  I told Abby to sit about 6 feet from the brick wall.  The first photograph was taken at f/4. The shallow depth of field renders the brick wall as a blurred gray and the bushes are patches of green and yellow.  No real 'definition' in either of the background objects. 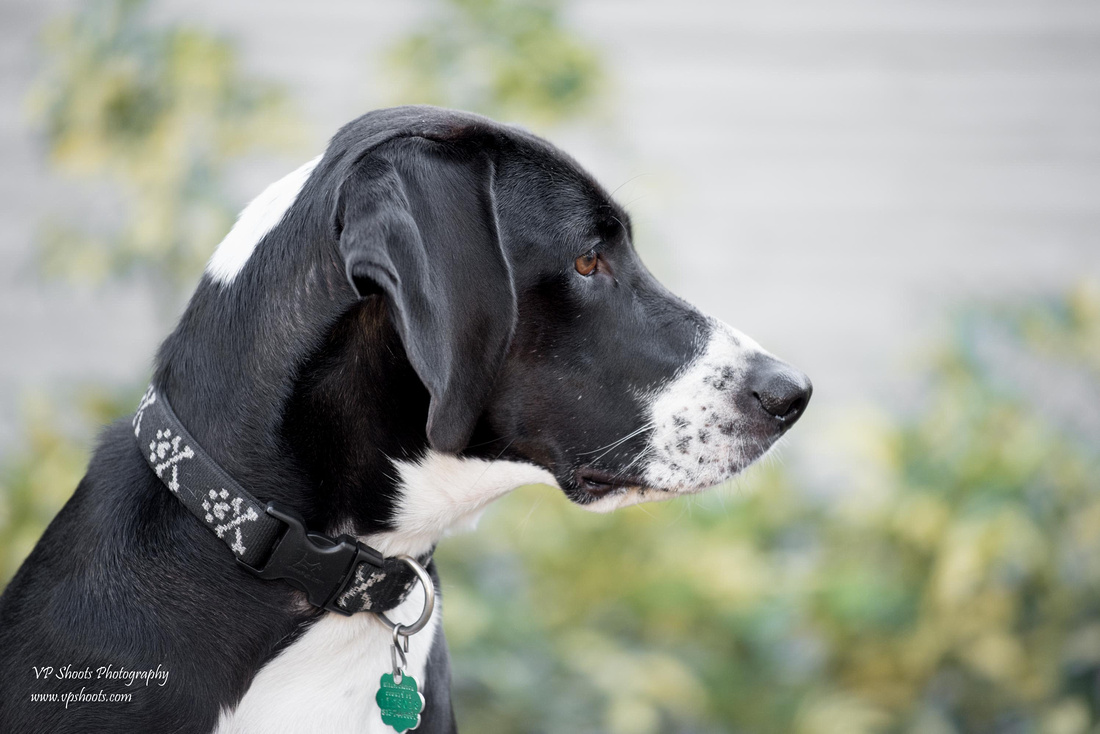 For those of you that are interested in the details of photography, let's talk about depth of field.  There are specific points to keep in mind.  The first, and most important, is the 'depth of field' is controlled by the aperture of the lens (sometimes referred to as the f-stop).  In the 'old days' before the world of digital - apertures values were fewer - f/2, f/2.8, f/4, f/5.6, f/8, f/11, etc up to a maximum of 32 but many lenses stopped at about f/22.  An easy way to remember the apertures is to remember f/2 and f/2.8 - then from that point on, double the number - so double f/2 and it's f/4. Double f/2.8 and it's f/5.6 (and so on).  Now, with the world of digital there are more aperture values available but often times they don't make a lot of difference in the overall photograph unless you have several 'stops' in between the apertures used (for example, there is not much difference between f/7.1 and f/8).  Please note that some lenses actually have f/1.4 or f/1.8 but these are typically only on a 'prime' lens (not a zoom lens).

The second photograph was taken at f/8. The depth of field renders the brick wall as a blurred gray and the bushes are patches of green and yellow but you can make out some of the lines in the brick wall and the leaves on the bush are a little more defined. 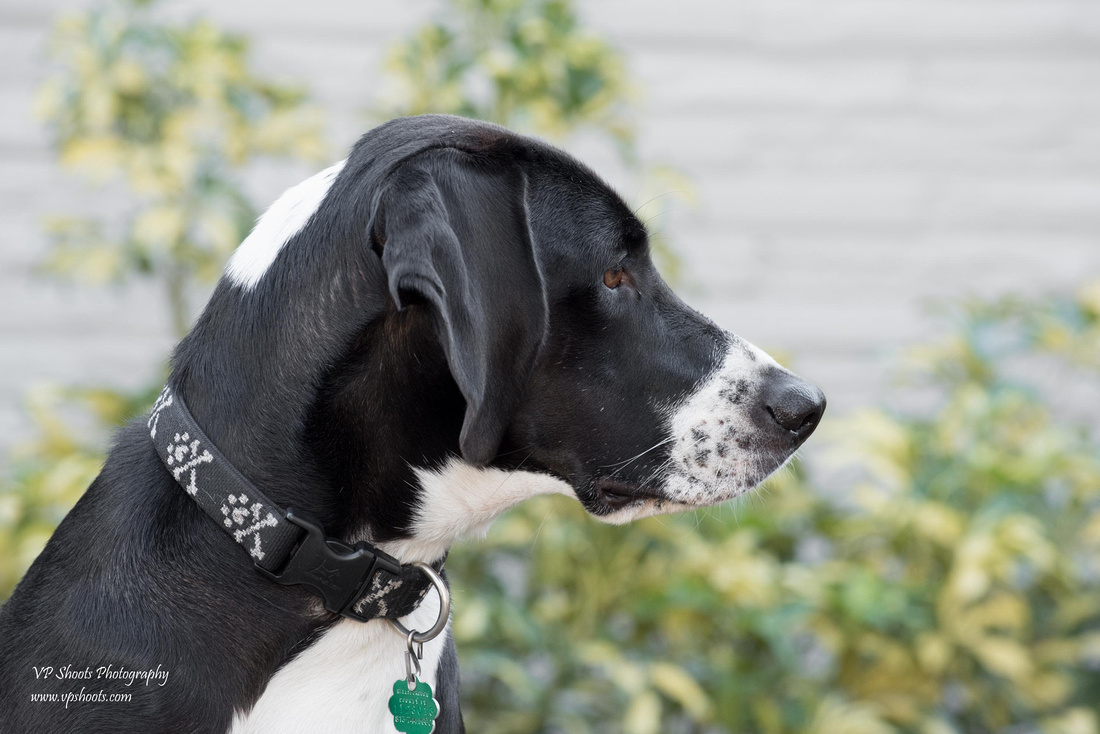 The third photograph was taken at f/13. The depth of field renders the brick wall and bushes as soft blur, but more detail is beginning to show in the background.  Abby changed her head position a little bit so my camera angle has change slightly, but we both maintained the same distance from each other. 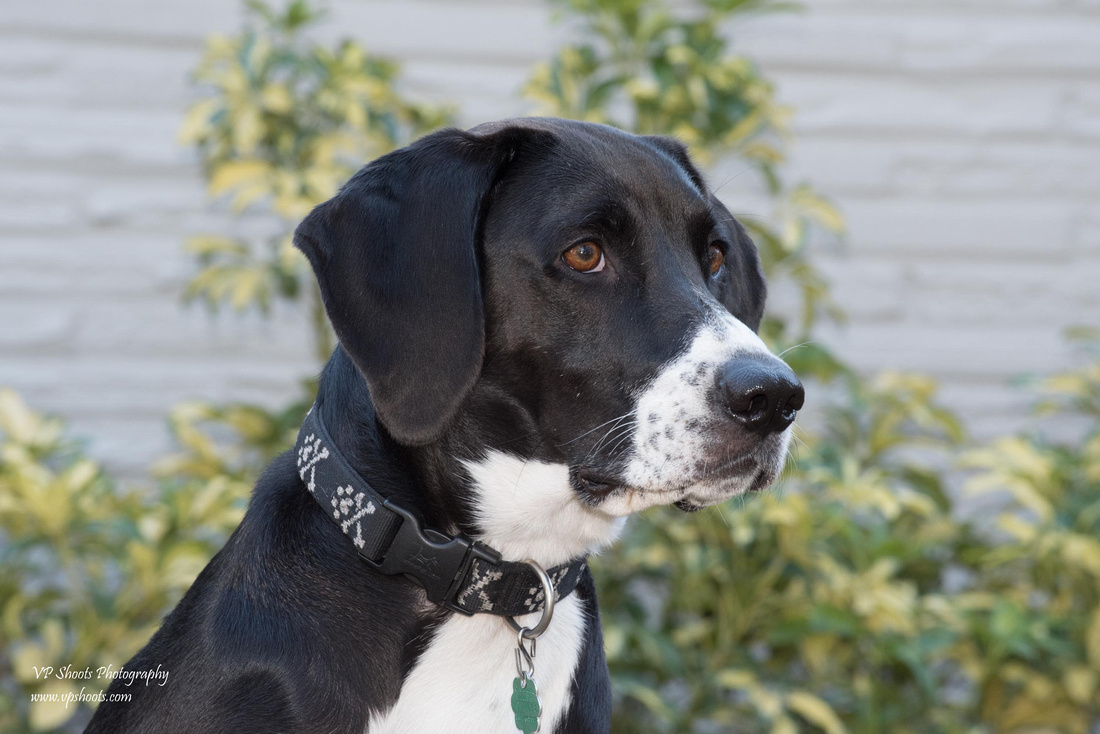 The fourth photograph was taken at f/20. The depth of field renders the brick wall and bushes with some blur, but there is enough definition in the background that the plant can be identified as well as detail in the brick wall. 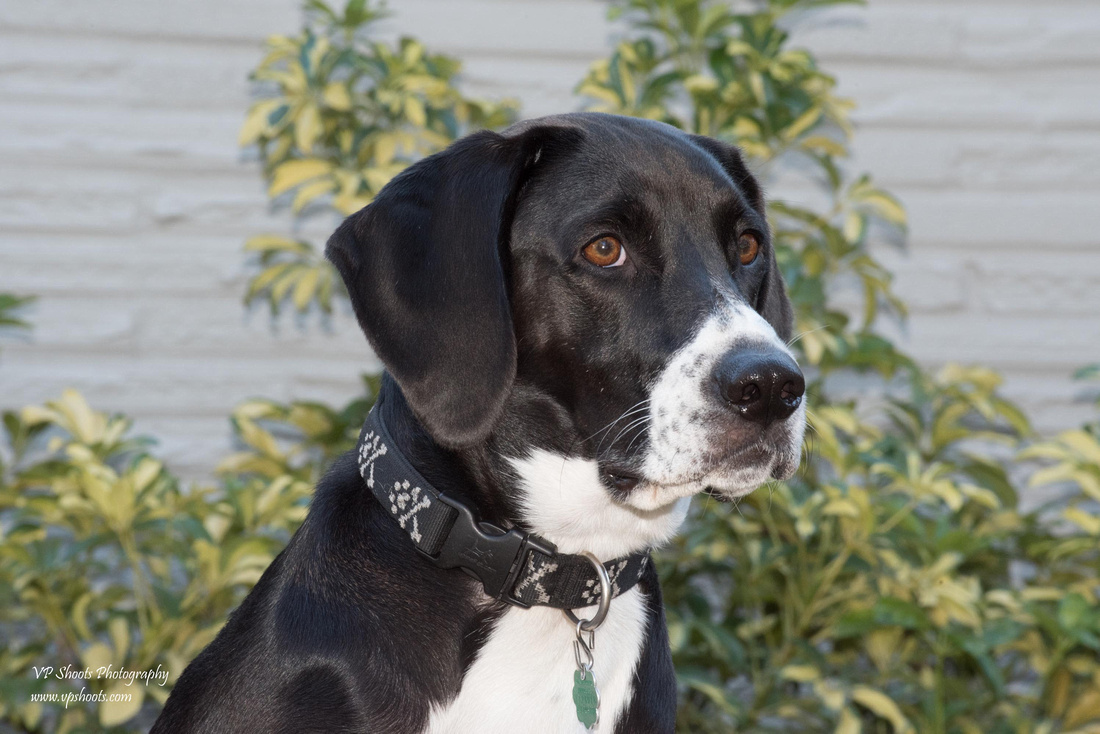 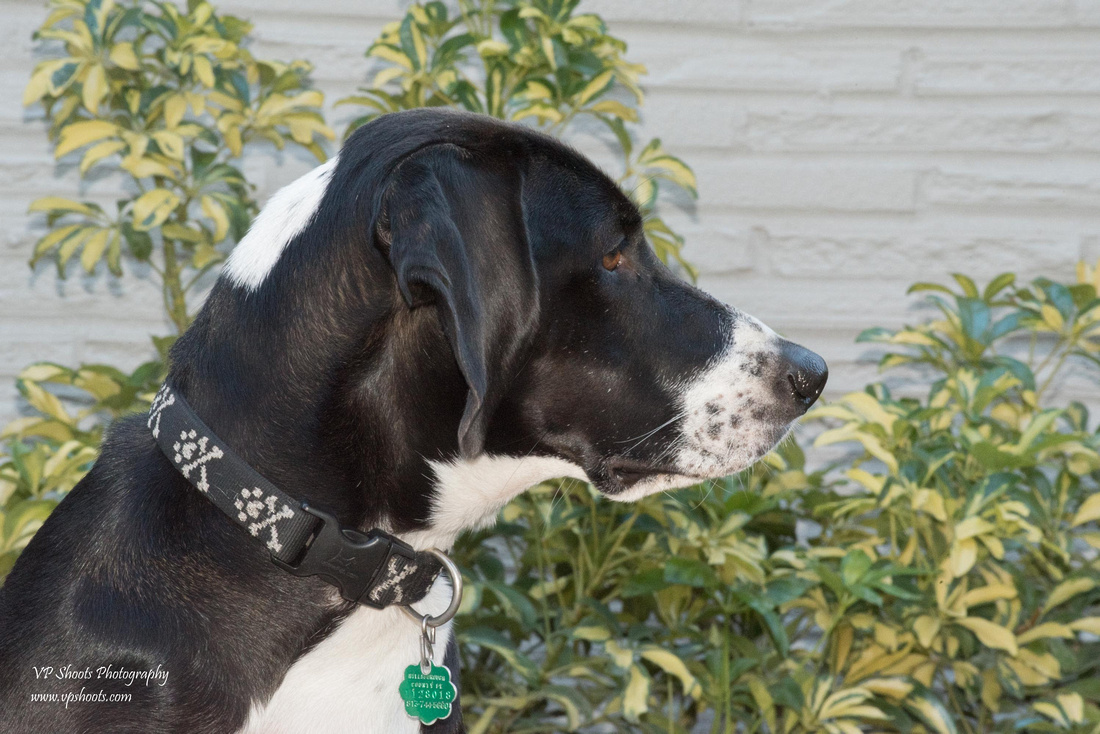 Hopefully, Abby was able to show you how the depth of field affects the background areas of the photograph.  For all of the above photographs, the focus was on Abby's eye.

Point one, the aperture is important to the depth of field for your photograph.  Next, the closer you are to your subject, the less depth of field you'll be able to capture.  It really does matter how close you are to your subject (think macro or close-up vs being a little further away).  In this photograph, the focus is on Jimbo's eyes.  Aperture f/3.3, 35mm lens, focus on his right eye (left side of the photograph) - but really close to him when this photograph was taken - only a small portion of his face is in focus. 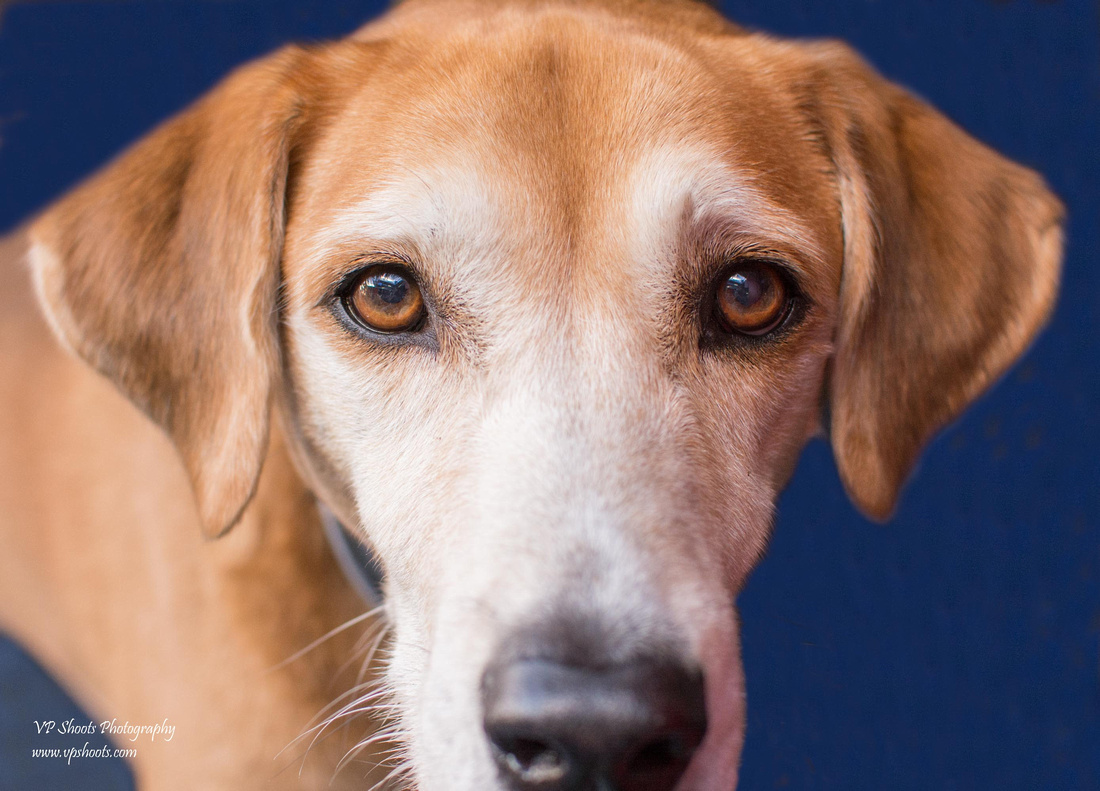 "If you want way less depth of field, and you've opened your aperture as wide as you can, get closer. Vice versa - if you want more depth of field at a given aperture, step back a little." David Duchemin states in his book "The Visual Toolbox". 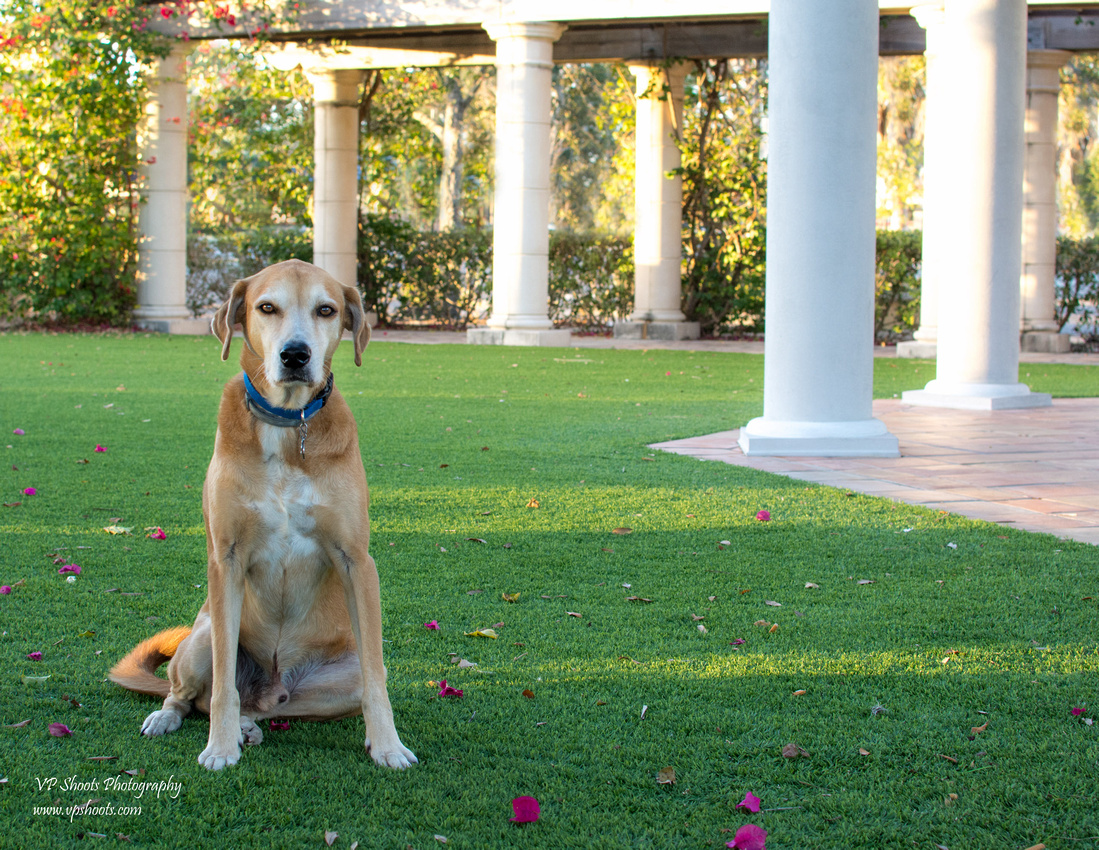 This photograph of Jimbo was taken at 35mm, f/5.6 - I've moved much further away from Jimbo to include his entire body and surroundings.  A much larger area is in focus.

Point two, the closer you are to your subject, the less depth of field you will have regardless of the aperture.

Point three, a wide angle lens (such as as 12mm (cropped sensor) or 24mm (full frame sensor) will appear to have more depth of field than a telephoto (such as 200mm (cropped/full frame)).  The reason longer lenses appear to produce a shallower depth of field is because they provide a narrow angle of view compared to a wide angle lens.  A telephoto lens will fill the frame with a much smaller area of the background, so any blur (or camera shake) will be magnified too.

Point four, the more distance there is between your subject and the background, the more blur can be achieved with various apertures.  This is why I asked Abby to sit approximately six feet away from the brick wall in the first series of photographs.  If I placed Abby next to the wall, I would not have been able to create the same amount of blur in the background.

That's enough technical information for the photographers - how do I photograph dogs?  I've found that my Nikon 24-70mm lens is my go to lens.  Why? It allows me to stay close to my subject, keep them engaged and provides a sharp photograph.  I can get close to the dog and blur the background using a shallow depth of field such as f/2.8 if the dog is not moving a lot.  If however, the dog is moving a good bit, then I will use a 'medium' aperture such as f/8.  If I have an assistant to work with me or the dog is good off leash, then I can use a longer lens such as a 70-200mm and get some beautiful blurry backgrounds.  My primary goal is to get a sharp photograph with some blur in the background to help separate my subject from the background but also provide a creamy background.  By the way, every lens will create different 'bokeh' or background blur - so if that's important to you, make sure you look at reviews before purchasing a lens. 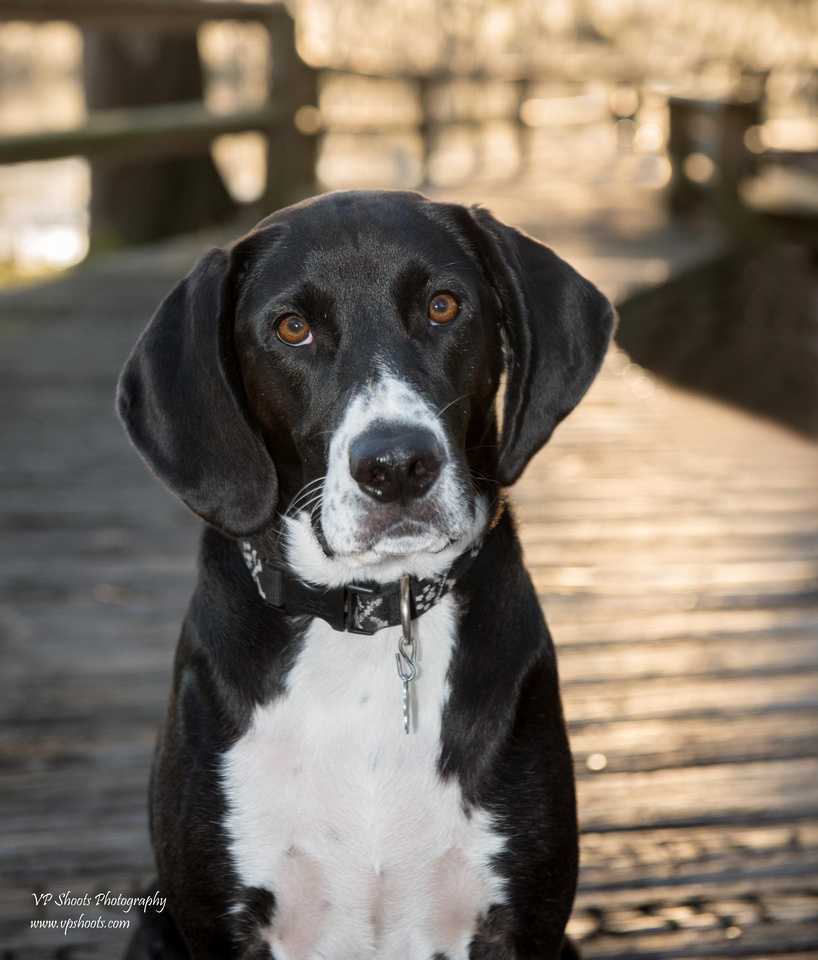 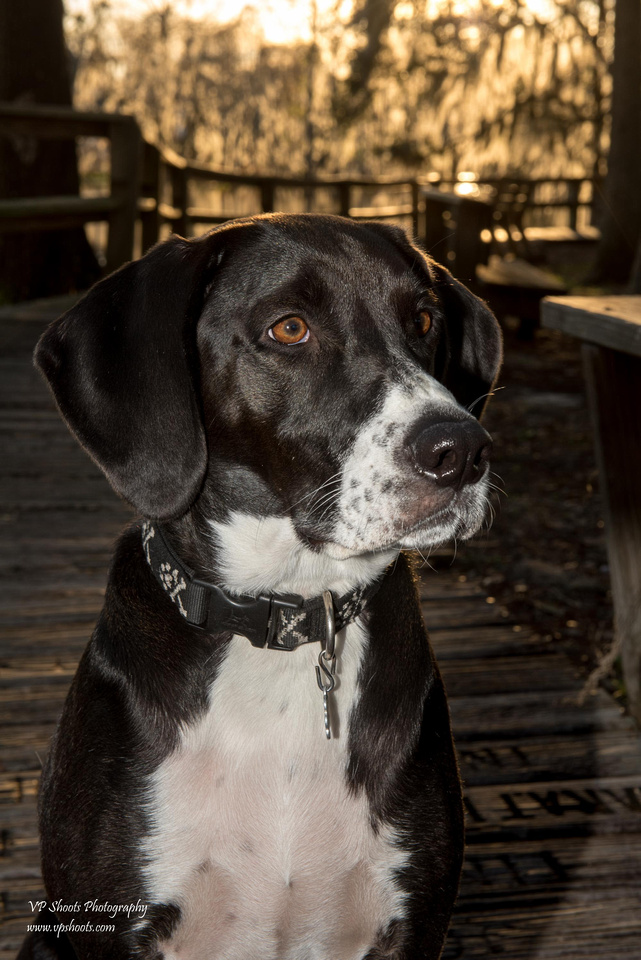 Using the Nikon 24-70 lens, set at 62mm, f/18, 1/60s with fill flash - this photograph has more detail in the boardwalk as well as the background and is not a typical aperture unless I wanted to feature the background as well as Abby.

For more 'depth of field' pet photographs head over to visit Kelly Garin Photography, Columbia, SC and then head around the rest of the blog circle.

If you would like to book a custom pet portrait session, send an email to [email protected] or give us a call at 813-610-2671 in the Tampa Bay area (Florida).