This past week we trekked up to Fort Payne, Alabama to enjoy cooler temperatures and some outdoor time with nature.  Some time ago there was an article in the Outdoor Photographer magazine that featured "Little River Canyon" in Fort Payne, Alabama as a favorite place.  So for all of you that may be wondering why here? That's why.  We left early and spent a good portion of the day travelling.  Since Fort Payne is in central time zone, we gained an hour arriving a little earlier than I thought - but that was great.  Once we found our rustic log cabin located at Bear Creek Cabins with hosts Randy and Sandy - our adventure began.  Though out the next few weeks you'll have the opportunity to venture with us on our trek.

This was 'home' for the week.  A small 1 bedroom rustic log cabin.  It was actually built back in the 1800's and was moved here to this location by Randy.  It does have electricity and indoor plumbing - I'm sure Randy had a hand in adding all those wonderful features.  The bathroom had an old time bath tub (the photos of the inside of the cabin will be in a future blog post). We unloaded all our stuff, found places to put it and then ventured out to check out the pond over by our hosts home (they live on the property).  Jimbo and Abby did travel with us - and after spending the majority of the day travelling (they both did great), I figured they would like to check out the new surroundings.  The sun is low over the pond where many go fishing (we didn't) and the cows are in the pasture but fenced away from the pond. Many of you probably know, I'm a city girl and I've not been that close to cows - at least, not without a barrier between us.  I don't think the dogs have seen a cow and certainly didn't know what they were all about.  After we exited the fenced area around the pond, we were officially in the cow pasture - and they came over towards us.  I think they were curious, but they might have been looking to see if we had any food.  The dogs didn't know whether to bark or run away.

Since we were in central time now and very close to the border between eastern and central, it meant the sun came up really early.  Ugh, the sun rises at 5:40am....if we want to get photographs of the sun rising, we have to get up really early - not seeing that happen today after such a long day driving on Sunday.  We did get out early and start the drive along the canyon wall, but not early enough to beat the sun on this bright, clear, no clouds day.

My first thought is, we need to use today (Monday) as our scouting day and see as much as we can and figure out how to get the best light on the things that are of interest to photograph.  Sun comes up at a crazy hour, no clouds, this is going to be fun.  Our first glance at the canyon - and wow is it way down there! This scenic drive has overlooks at a good many different places and we stopped at a lot of them, but the canyon was way down there - so far, that in some cases we didn't see it because neither of us were up to standing on the edge and looking down. The rock formations are huge and the mountains are amazing to view - but I couldn't help but wonder, what does fall color look like? Our first glimpse of the Little River Falls from a overlook viewpoint along the canyon wall.  You can see the clear blue sky, not a cloud around! Many think this is great lighting, but it does change what the camera will actually capture so it's not ideal for great photos.  It's only 8:13 in the morning and it's already looking like high noon except it's a little cooler. In the photograph above, you see a bridge above the waterfall.  The bridge is on highway 35, so we drove on that and just to the right of this photograph is a parking lot where we stopped to view the waterfall from a closer view.  The sun was definitely to high for great photographs of the waterfall - having already risen above the east canyon wall.  The waterfall itself faces to the south - so in order to get photographs without the blazing sun either photograph REALLY early in the morning or late in the afternoon after the sun drops behind the canyon wall or pray for clouds.

This is the portion of the waterfall closest to the view point - it was in the shade when this photograph was taken. 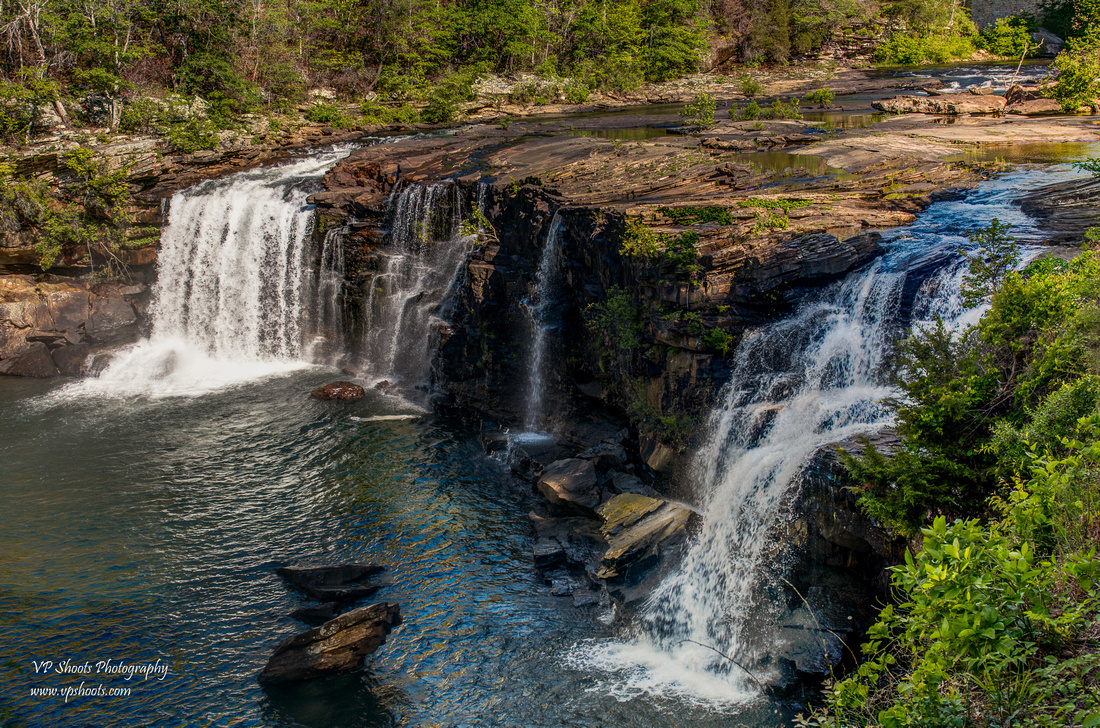 Our next stop was at a local dining place, nothing fancy but the food was freshly cooked and to order.  Ralph's lil canyon grocery and grill - they cooked breakfast and we all ate at the picnic table under the dabbled sunlight (partial shade).  We enjoyed our meal (dogs included) and then continued on to our next stop - DeSoto State Park and DeSoto Falls.  We quickly found out that the sun was just not going to be our friend - and we went back a second time to DeSoto Falls to get photographs in the late afternoon.  DeSoto Falls, the waterfall itself, faces west.

If you want to see those photographs, check out the next blog entry!!