Wow, we are getting up early today, it's still dark outside!  Breakfast first, then loading up the truck - we are heading out for an adventure today after riding in the car for a long time yesterday.  We drove from Pickens, South Carolina over a winding road to Brevard, North Carolina about 45 minutes away.

We met friends in Brevard (one from Tampa) and headed out for a day of adventure.  The first stop is Looking Glass falls which is just along the road side, very little hiking required, not much opportunity to wander around for Jimbo.  I can see in Jimbo's eyes "Stairs, ugh, not my favorite thing in the world." We walked down the stairs to get to the bottom of the waterfall.  Since it is along the road side, it is very popular and often hard to get a parking spot but we were early, just after 7:30am, which allowed us to get there and take some photographs without other people yet wondering around.  The 'sun star' was created by using a small aperture on the camera (if was not photoshopped into the picture). 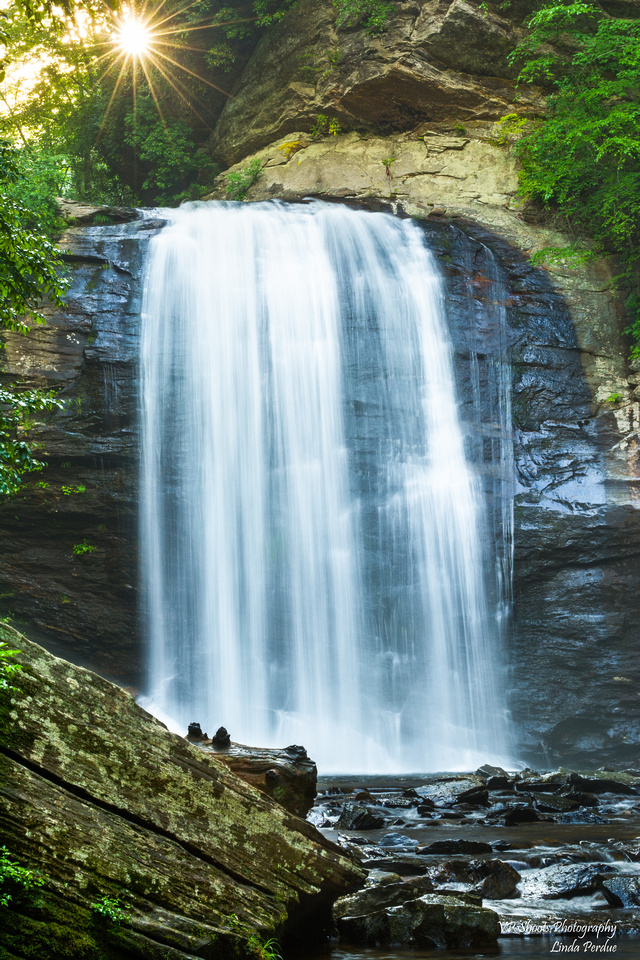 And here Jimbo is sitting on the stairs wondering why exactly he is tied up when everyone else is wandering around freely.

The little 'orange' and 'yellow' boxes indicate various places that we took photographs and GPS coordinates were recorded.  The next waterfall is Rock Falls located under the number '30' on the map shown here. '30' indicates the number of photographs that were taken at that location. 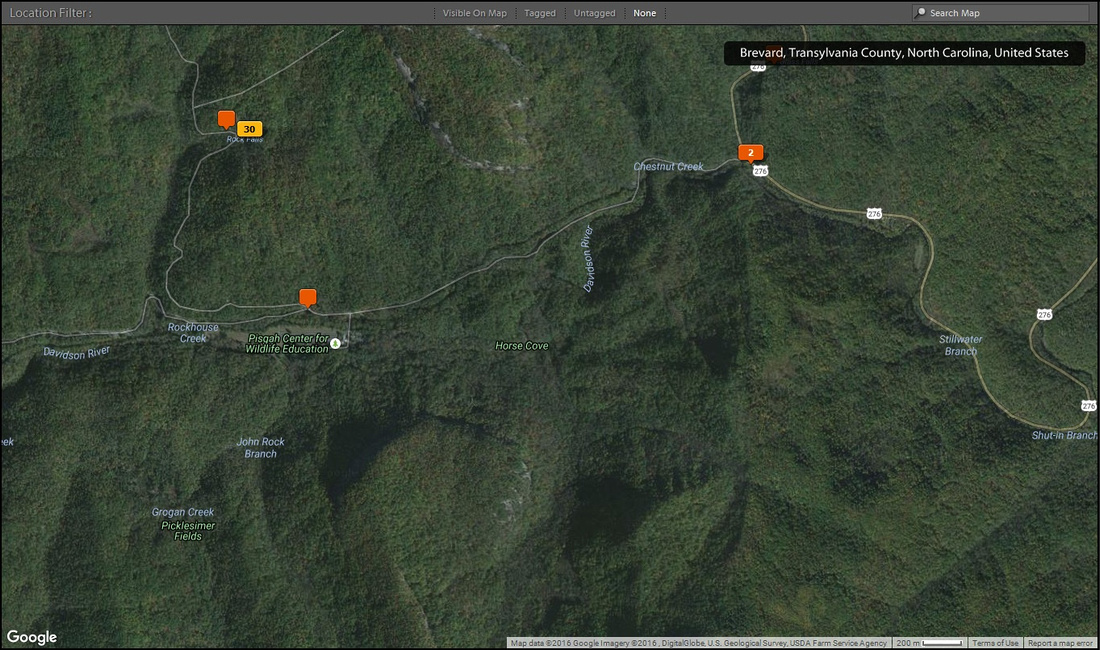 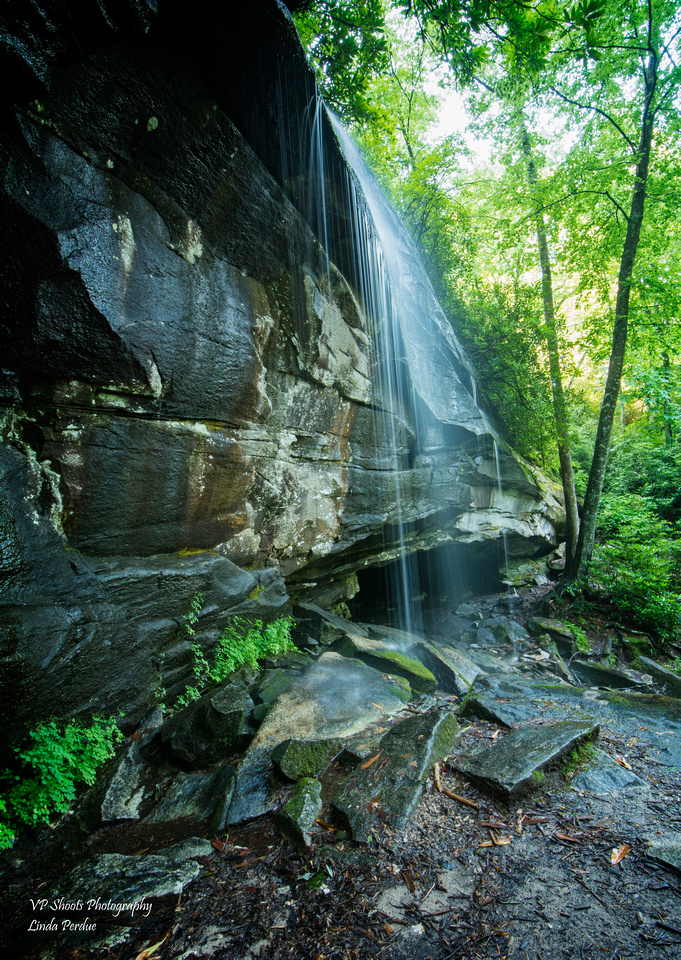 Each waterfall stop was rather short as we had a lot of ground to cover today.  We spent an average of 20-30 minutes at each location and for the first few waterfalls the walk was short.  We are all used to a slower pace where we can wander around, Jimbo smells the sites to see who else has been here recently.

Ah, now we are starting to get a little walking in as we head down a trail and Jimbo seems to be taking this in stride as this is our 'normal hiking adventure'.  This is 'Whale rock' with a waterfall in the background. 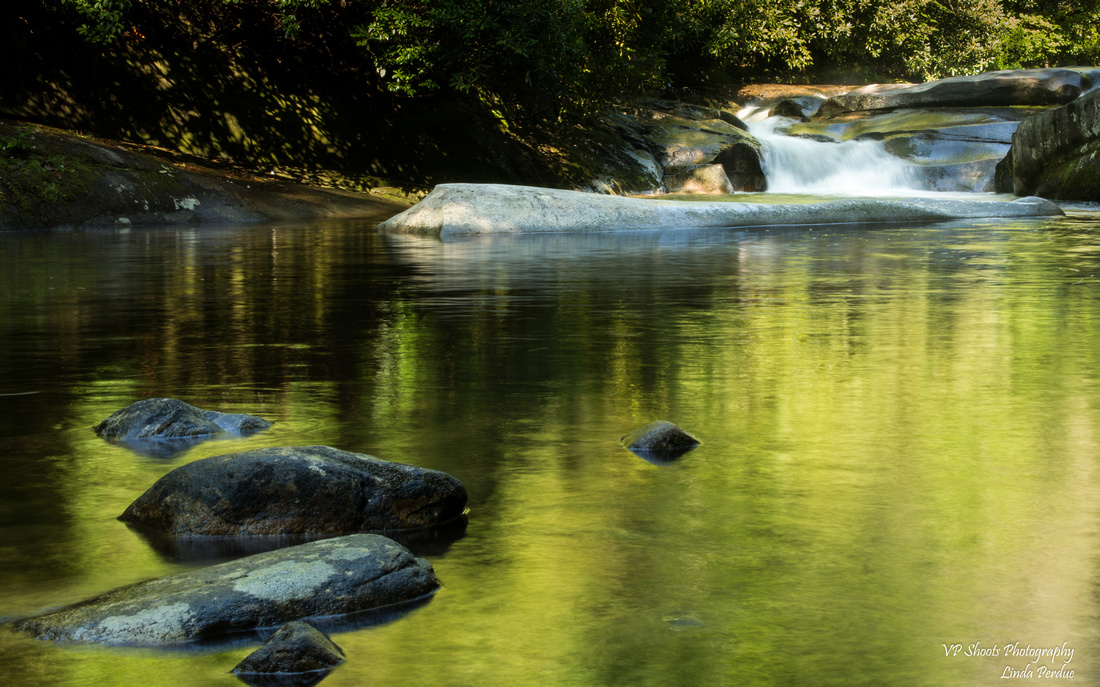 Back on the trail again after just a few minutes - but now we are climbing around on rocks next to the water.  Jimbo spotted a nice shady place to hang out while we wandered around taking photographs. 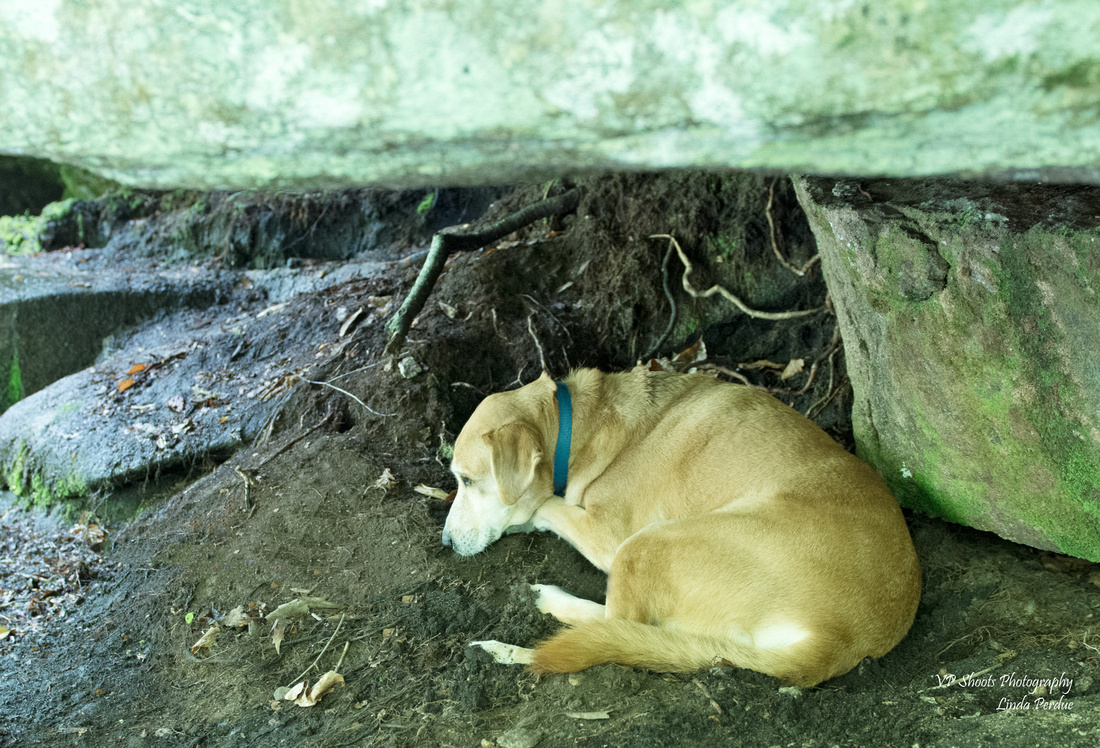 Jimbo seems to be saying: "This is going to be a long day and I'm ready for a nap."  He dug himself a little hole to get to the cooler dirt and hung out here till we were ready to go walking again.  Our last waterfall was the longest hike of the morning.  By now, the sun is high and hitting this particular waterfall located off National Forest 475 road. I'm not even totally sure where we are, but we are following our friends in their car.  Somewhere along the way, I snapped a picture of a sign that says: 'Cove Creek Group Camp' located in the Pisgah National Forest so I know we are in this general vicinity.  The sun has gotten higher, it's now shining on the waterfall which faces (roughly) east, so it is not optimal photographing time, but was a nice walk for Jimbo and a huge waterfall! 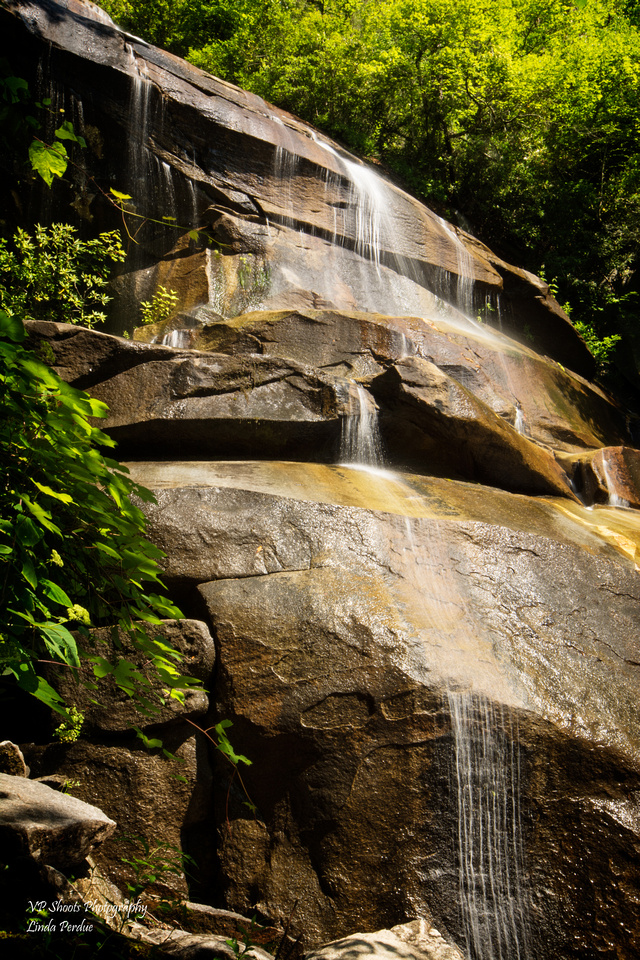 Merry Falls was beautiful - it took my breath away when I first saw it.  Jim and I were both thinking....did they save the best waterfalls till last? The photograph probably does not do this beautiful waterfall justice, but it will give you an idea.  This waterfall faces (roughly) west, but by the time we got there the sun was shining through the trees and making it a bit spotty for taking the pictures. 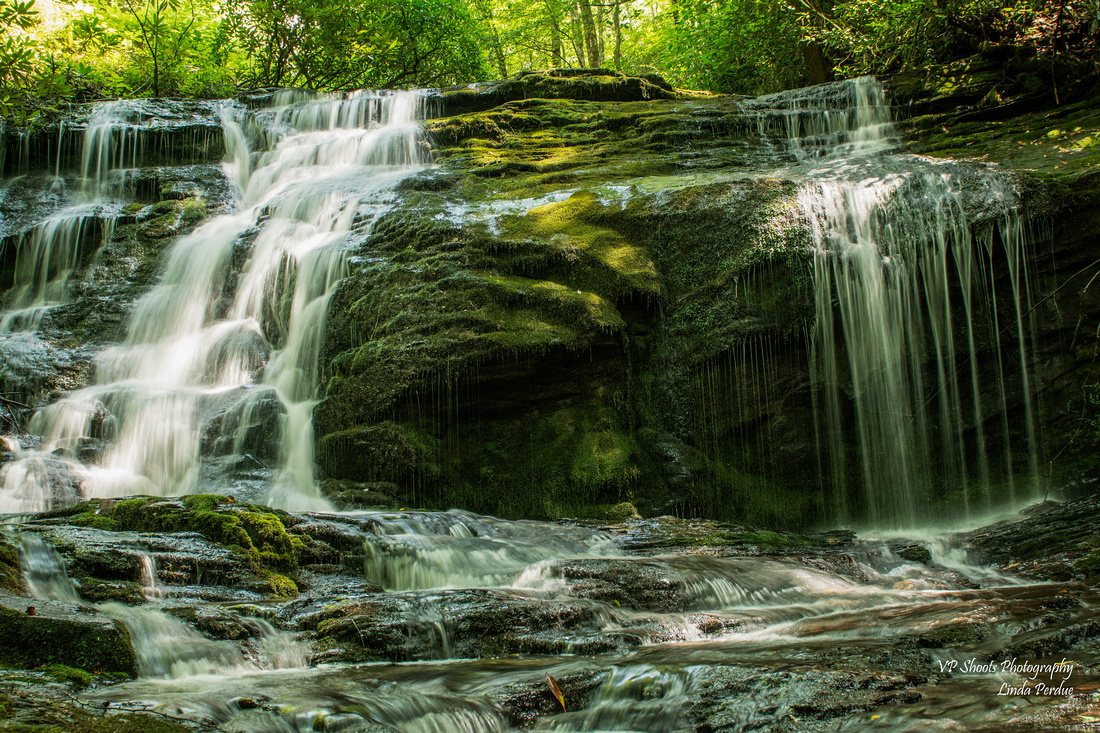 Our last stop on the trail was a wonderful 'secret waterfall' also (not well known to many and hidden behind a gate that we walked around). 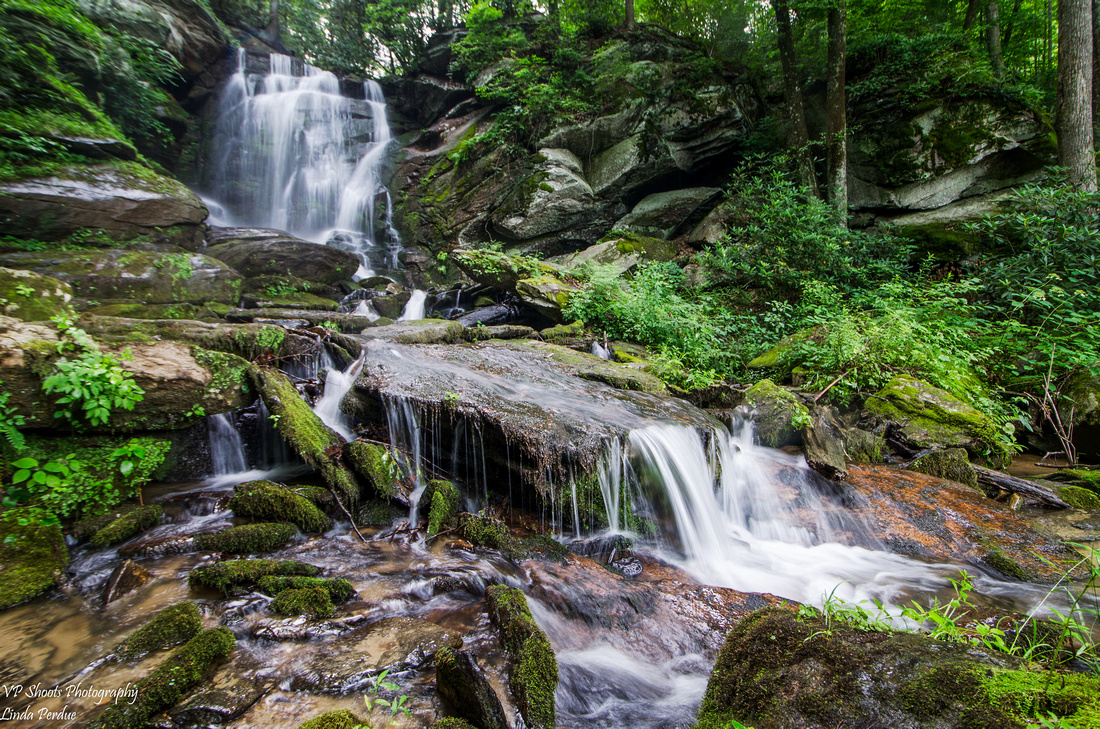 By now it's after 4:30 in the afternoon and we have traveled a good long ways around this part of the country.  Just a glimpse into the world of waterfalls around Brevard, North Carolina.  Soon we headed back home to our rental place in Pickens, South Carolina.

To see more pictures of this area, please visit the gallery for our trip. http://www.vpshoots.com/pickens