Last Saturday, December 10th, was one of the only days each calendar year that Cracker Country is open to the public.  As I entered the Florida State Fairgrounds, after paying the parking, the next person asked "Do you know what event you're going to?".  I had to laugh, of course I do!  I want to go to Cracker Country - so he directs me over to where I should park.  I mentioned this to the woman in the ticket booth and said told me "You would be surprised how many people have no idea what event they are going to".  I was a little blown away, but I guess it's possible that you don't know the exact event - but with 5 events happening at once, it sure does help to know.

Most people might stop in to visit this pioneer village while visiting the state fair - it's open, but probably very crowded.  The entire area is composed of different buildings that portray a rural living history museum that represents what might have existed in Florida.  It was established in 1978 by Mr. and Mrs. Doyle Carlton, Jr (based on the Cracker Country website).

I've been here several times in the past, so I headed over to the post office - usually one of my first stops.  The old time letter bins, typewriters and post office equipment are interesting to me - a reminder of days gone by when the mail was sent to the city and the city (or town) was small enough that everyone knew who the families were.  The 'post woman' informed me that this was an actual post office up until not long ago - I wonder how much business they did if you have to pay just to park?  I didn't think to ask. 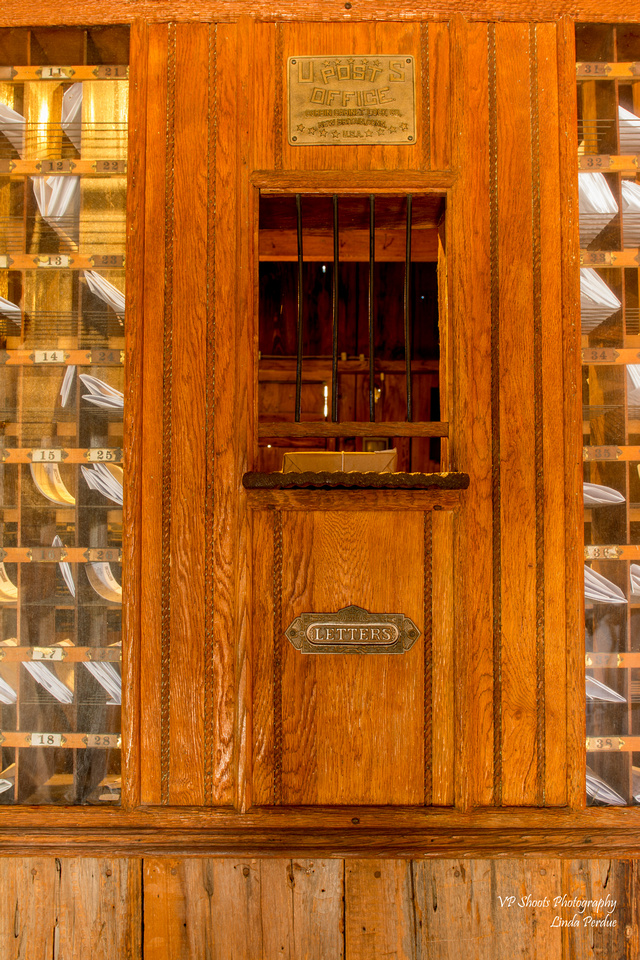 Old time Christmas decorations were hanging on several of the buildings - many made with the berries of the invasive Brazilian Pepper plant (wonder if that plant was here back in those days?).  The wreath is hanging outside the store on either side of the entrance. 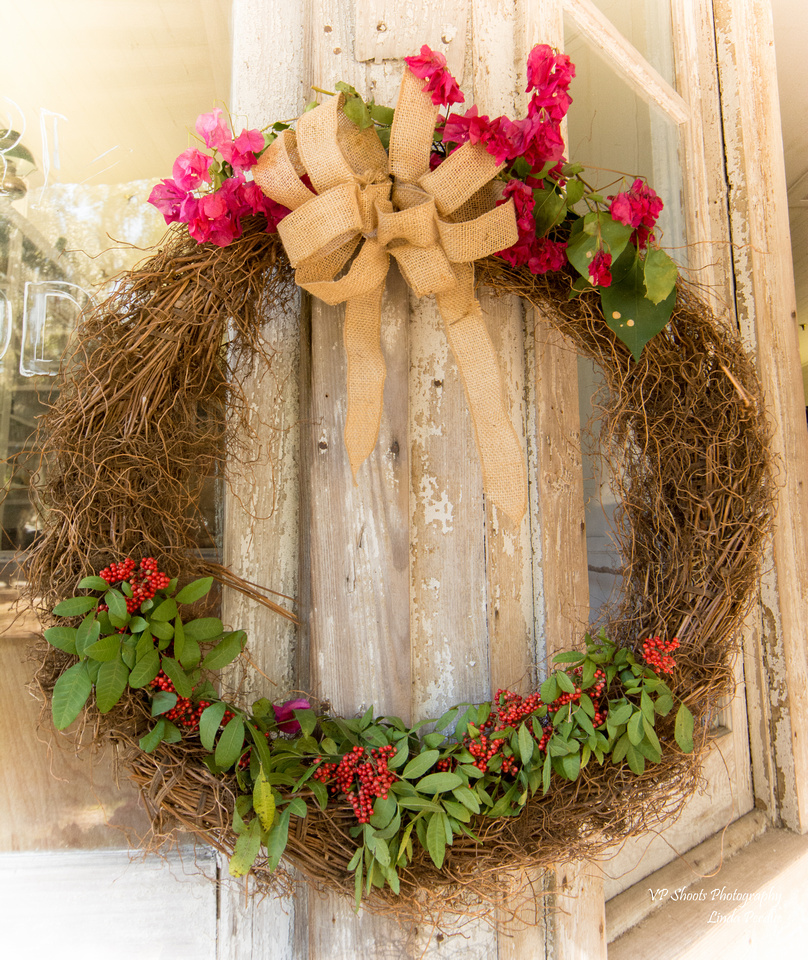 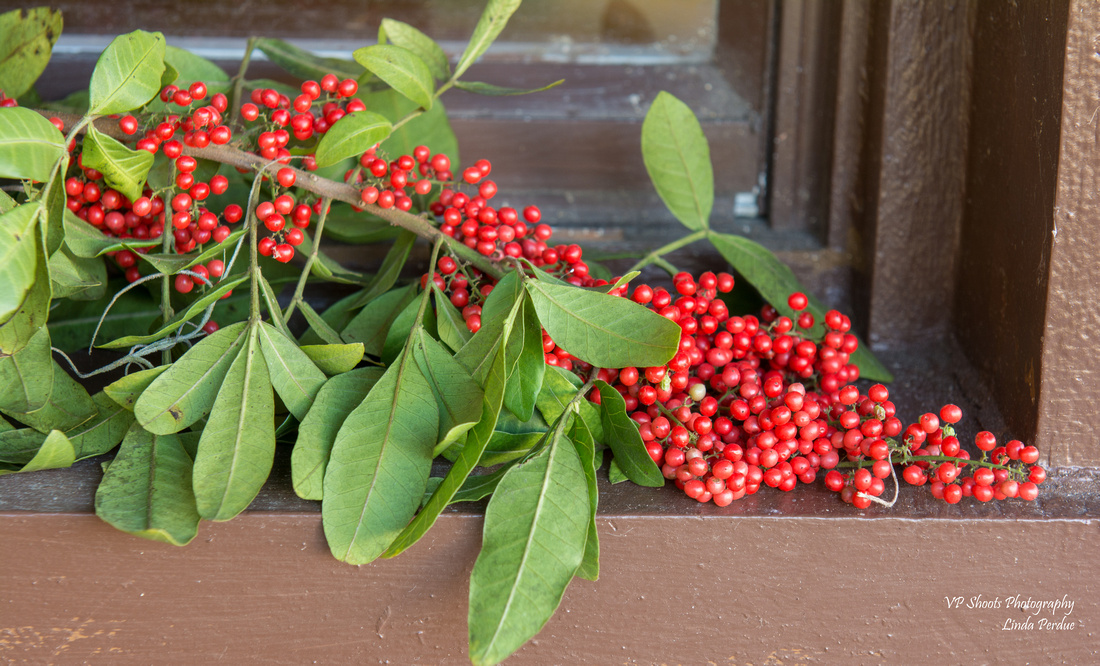 As I entered the store, two young pioneers were playing a game of checkers.  Checkers is one of the oldest games in the world and it is not known who invented the game.  The version of checkers we know today emerged back in the 1600s. 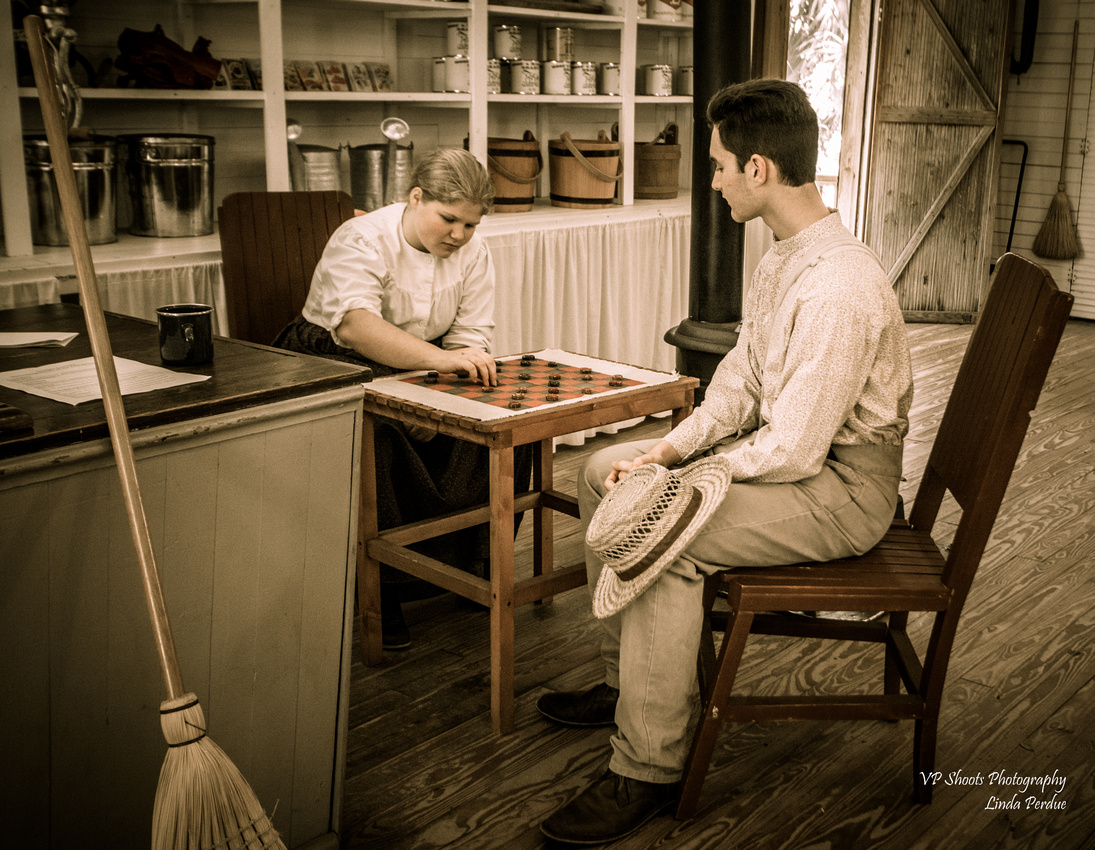 Back in pioneer days, apples were cheap! 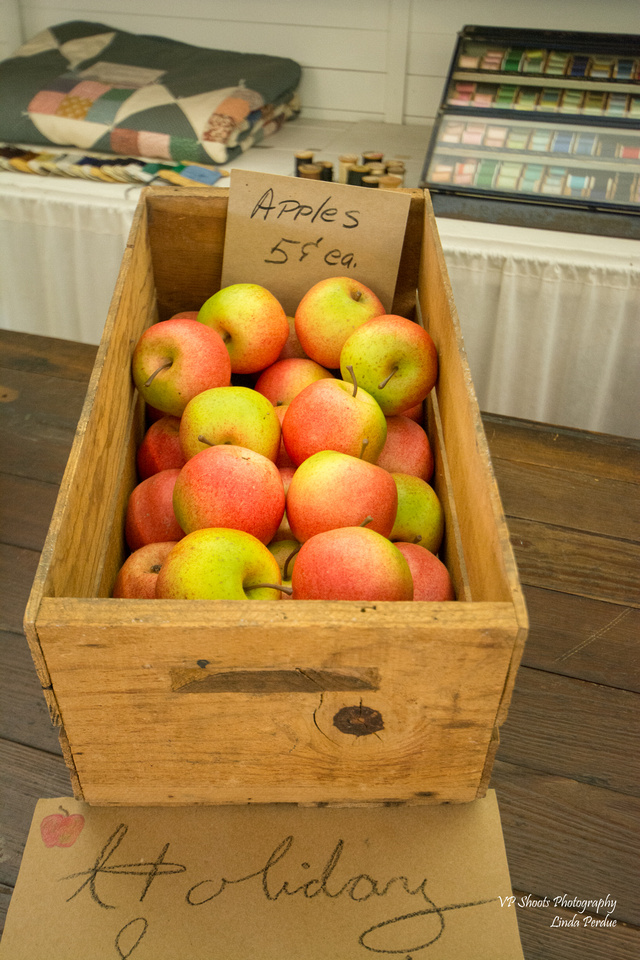 Beautiful music can be heard outside the church.  As you wonder in to the small church you'll find this woman playing instruments that you probably have never seen before. 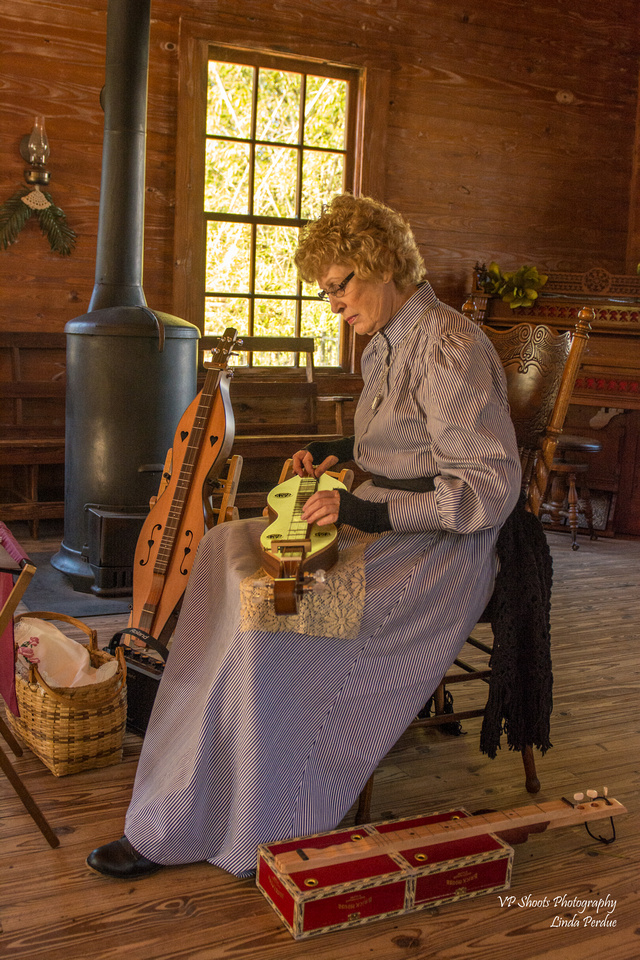 The country church has a small alter at the front with a cross and simple decorations. 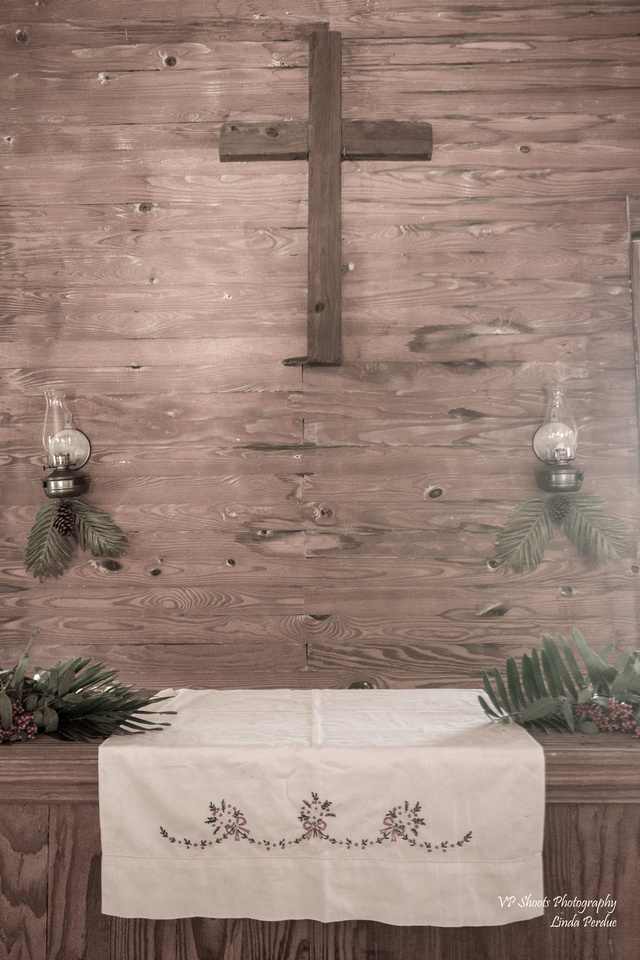 Looking out the open church doors... 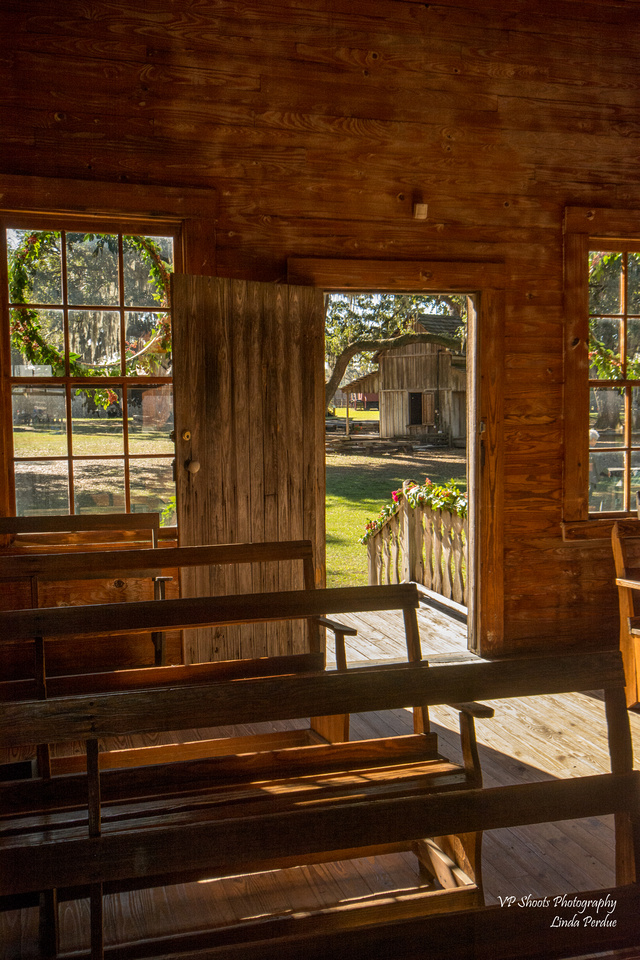 And looking out the side door near the alter, is a pioneer woman working with yarn sitting in her rocking chair on the front porch. 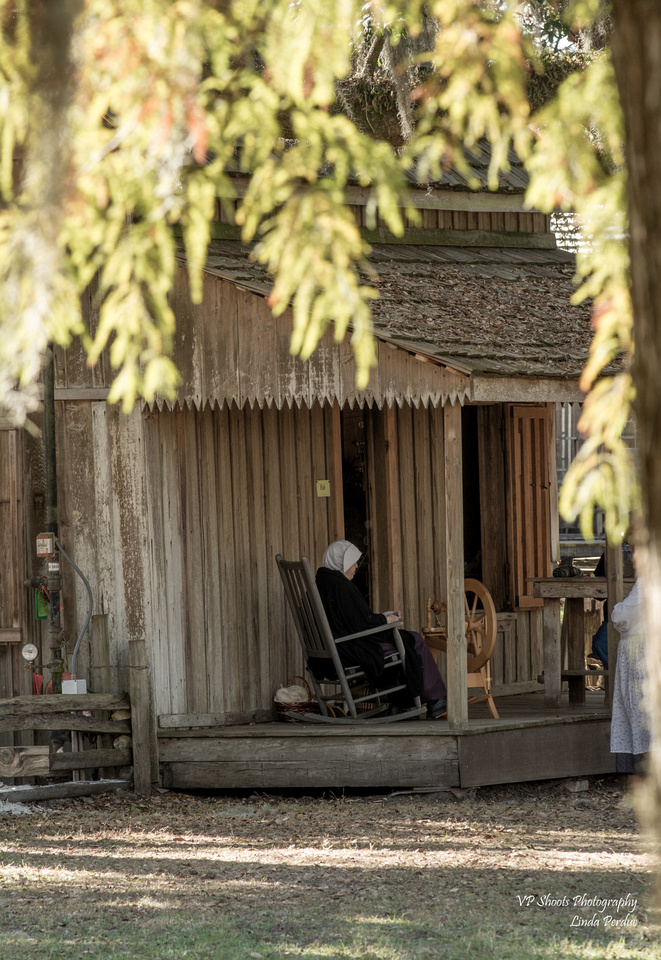