We hiked a small piece of the Appalachian Trail - according to a local, we hiked about 1.4 miles of it.  Recently, we decided to head out to find Tellico Gap which is located in Franklin, North Carolina.  As we were in the Franklin area, Google Maps told us to take NC Highway 28 (Bryson City Road) north to Tellico Gap road.  If you haven't been lucky enough to find another website with information about this road and hike - please be aware that this is a dirt road - and it's a dirt road for a bit of a distance - couple of miles of narrow, dirt and winding road.  Passing another car is a bit scary - and you definitely don't want to pass anyone going any speed because one of you will be on the 'outside' of the road and there are steep drop offs.  We did manage to take this little winding dirt road up to the parking lot.  And nope, there are no photos of that winding road because I was to busy hanging on as we snaked up slowly and I watched Google maps slowly say the distance was getting shorter to our destination.

The parking lot is well setup and holds about 10-12 cars - all nicely sectioned off into little areas that allow a little privacy should you need that.  Keep in mind that there are no bathrooms except the great outdoors - no food, water, etc unless you brought that with you - so plan ahead.  It's easy to see why this particular area was named 'Tellico Gap' as there are large electrical towers coming up through the mountains here.  This one is right next to the parking area.

Gives you an idea, there are several little areas that are well marked for parking. 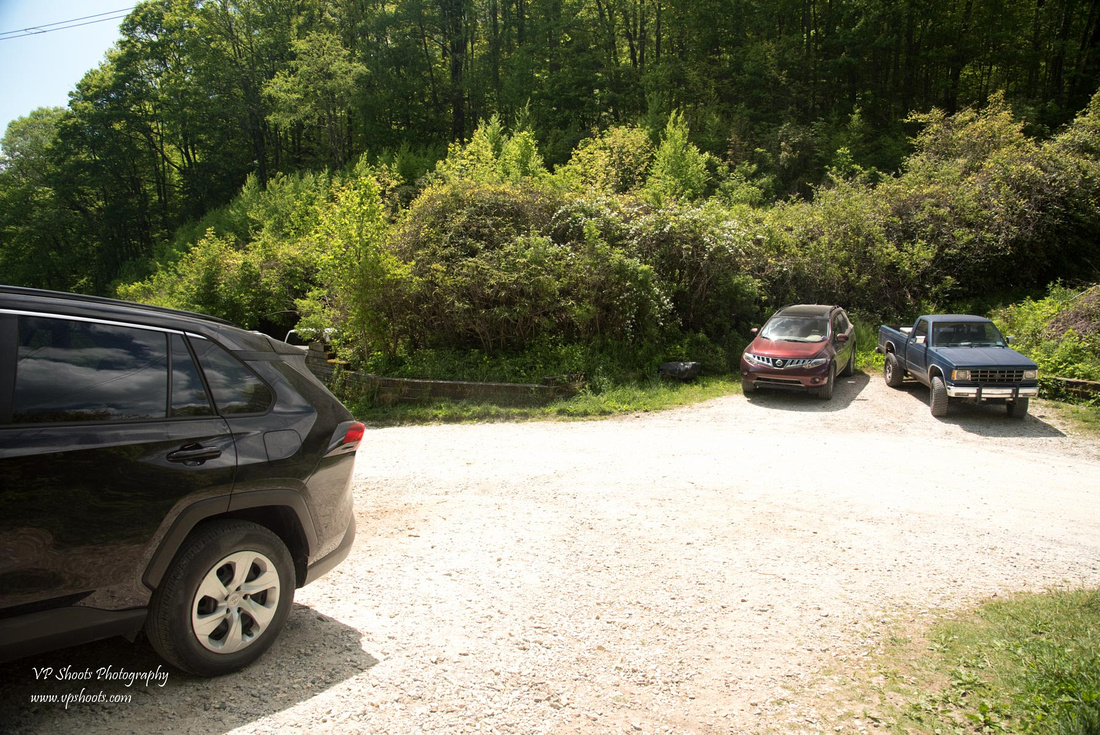 As we parked and got our little group of 3 dogs leashed up and ready to go, the next step was to find the trail. While we like to hike, I wouldn't consider us experts on the 'way of the land' when it comes to hiking.  If you look here, you will see a trail that is on the left and then another trail that is behind the 'road closed' sign.  These are pretty important to be aware of and we did miss this on the way up on our hike.  The trail on the left is actually the Appalachian Trail - blazed white - and you're in for a nice hike that steadily climbs in elevation.  The hike itself is well marked and not to challenging - but it is 1.4 miles in length.  There are some areas that have drop offs or are pretty narrow - so keep those dogs close as well as any human children you might have with you.  Plenty of places to stop and take a break - and we did.

If you take the trail to the right, the one behind the 'road closed' sign - that's an old forest road (I'd love to see a vehicle travel it) - it's is .6 miles in length (a lot shorter!) and based on what others have said it is steeper than the AT although, I'm not totally sure I agree it was that much steeper. 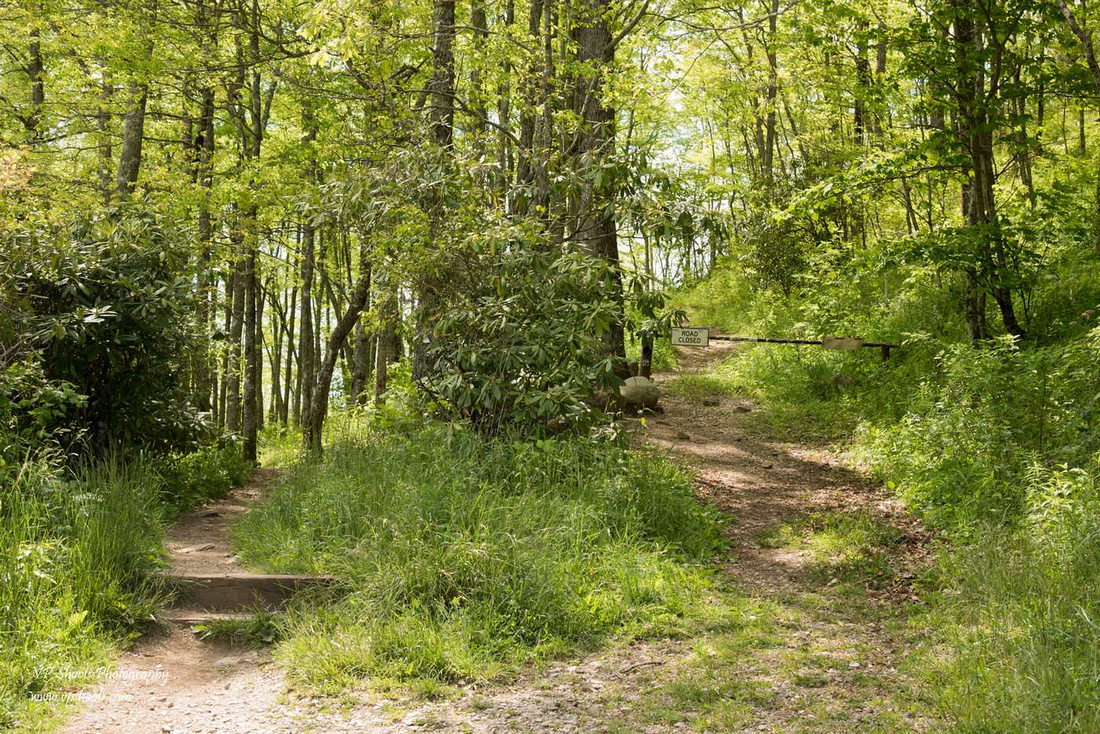 If I was to do this again, I would choose the trail on the right - it's shorter and I can handle a little steeper if it's that much shorter to the same wonderful view.  But, we didn't see that at first, so we headed off on the AT, the trail on the left.

Shortly after we started our hike on the Appalachian Trail, we saw this sign confirming where we were.  I am sure that this is very helpful to those that have been on the trail for many days and are wondering exactly where they might be now. 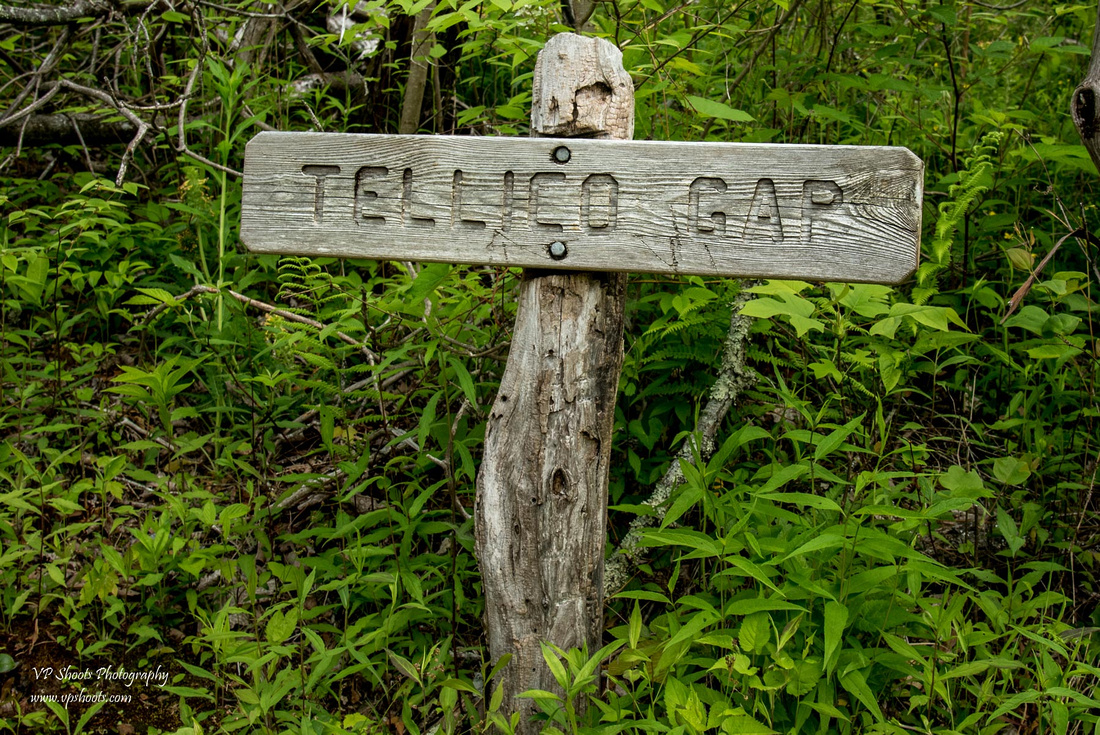 We continued hiking on up the trail - here's a few photographs to give you an idea of what parts of the trail are like.  In many areas the clay and dirt is very well packed down and there are very few rocks on the actual trail. 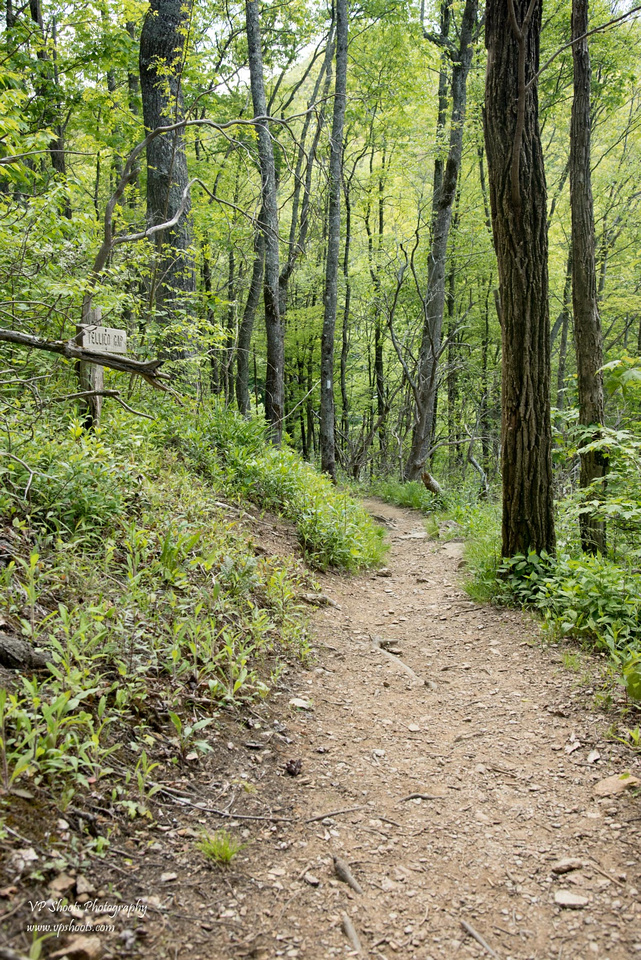 This area of the trail is fairly wide - enough to comfortably hike without seeing any drop off that is close. Along the way you will get some glimpses of the overall scenery - but for the most part, until you get to Wesser Bald, there aren't any real open views that don't have trees, branches or some other obstacle blocking part of the view. 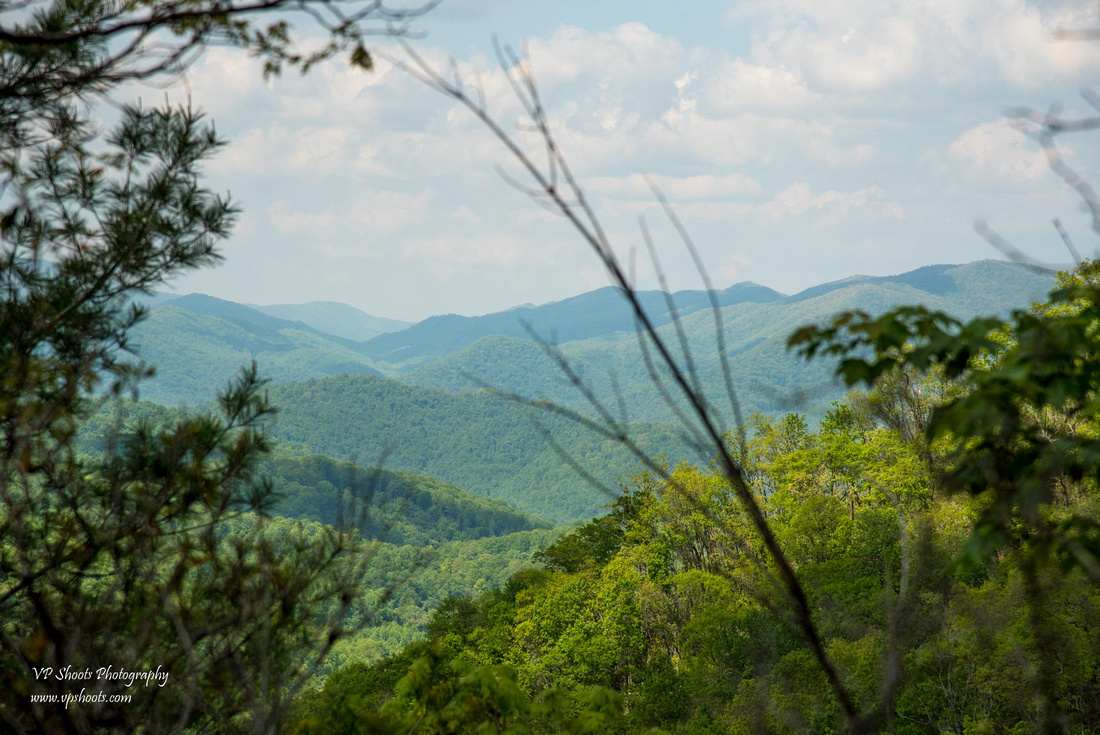 Along the way we saw several people that were carrying their smaller dogs back down the mountain.  The smaller dogs one can carry - but ours aren't that small - the smallest being about 30 pounds.  Having said that, we took breaks! And right in the middle of the trail we did.  The elevation changes and having been under the weather the previous few days forced me to take more breaks than I would have liked - but then we did continue. 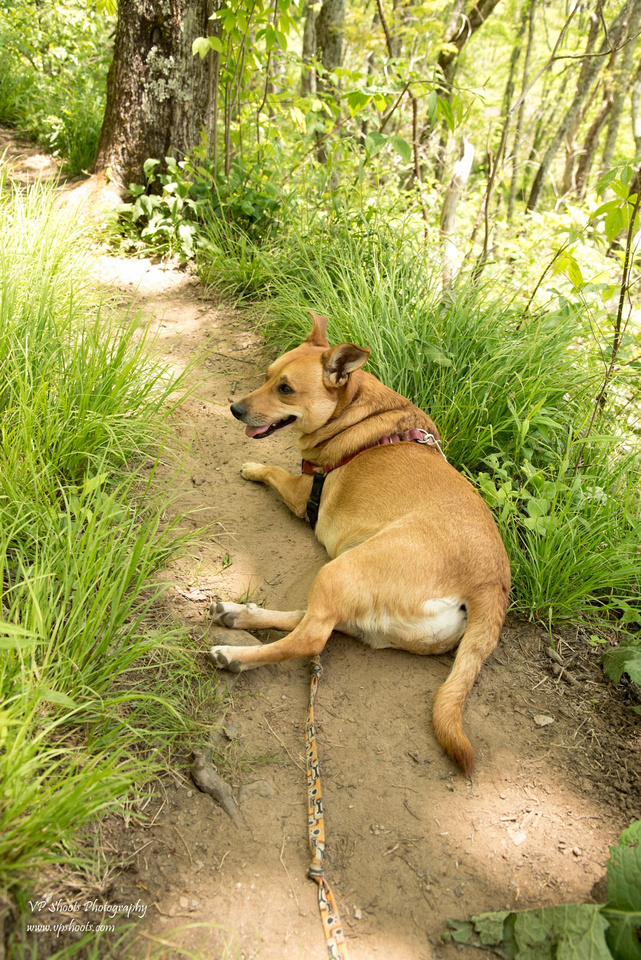 If you pay attention, you'll see this log with the marker "AT" carved into it.  I suppose this is a fairly common thing, but it's the only log we noticed was carved on this section of the trail. 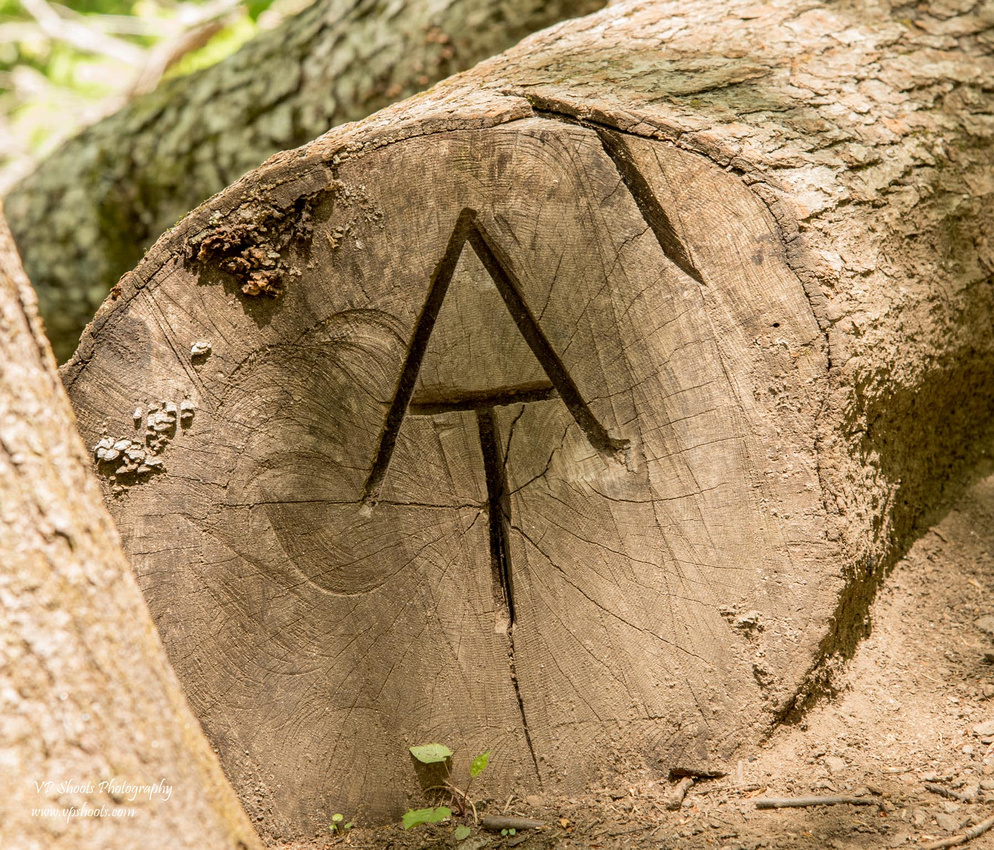 We stopped for a little while at the campground and fire pit as we got closer to Wesser Bald. 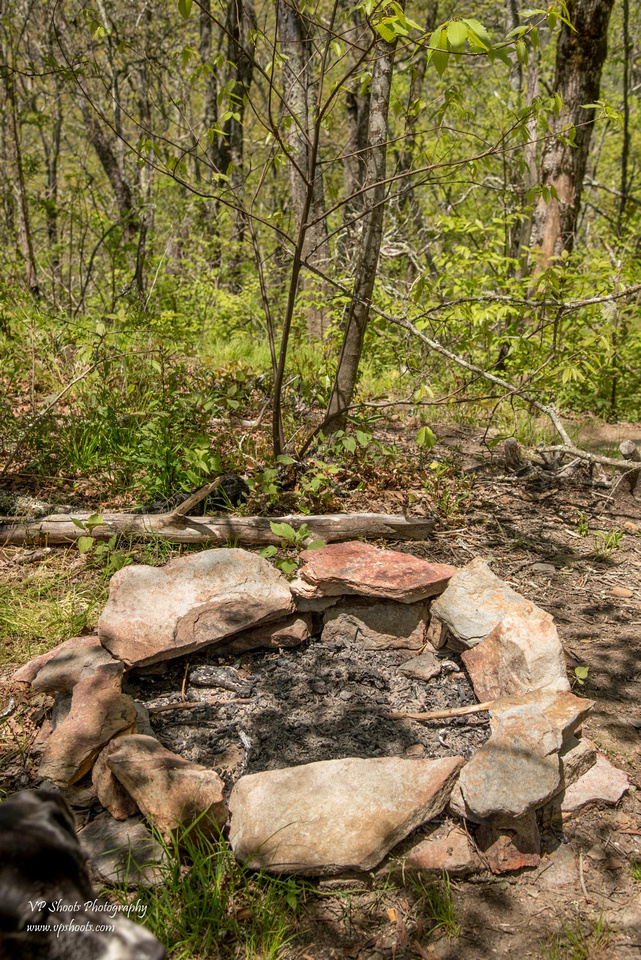 And finally - we made it to the top.

The dogs are all for taking a relaxing break - we all did.  It's much cooler up on top of the mountain and there was a nice breeze coming through to help make it nicer. 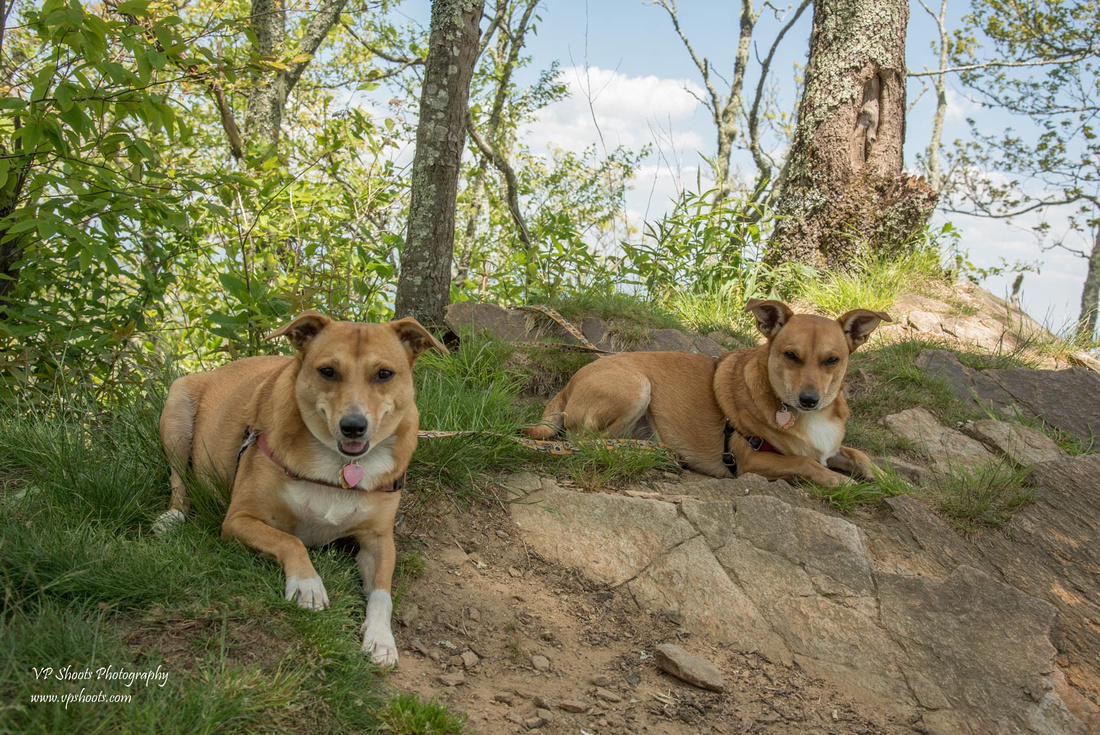 These are our mixed breed 'twins' (they are little mates).  Rue on the left, Ollie (short for Olive) on the right.  They were champs on getting to the top of this mountain climb.  Probably totally having the time of their lives. Abby, while grayer, is only 5 years of age, and much bigger than our twins.  She took to resting just fine - enjoying the time. 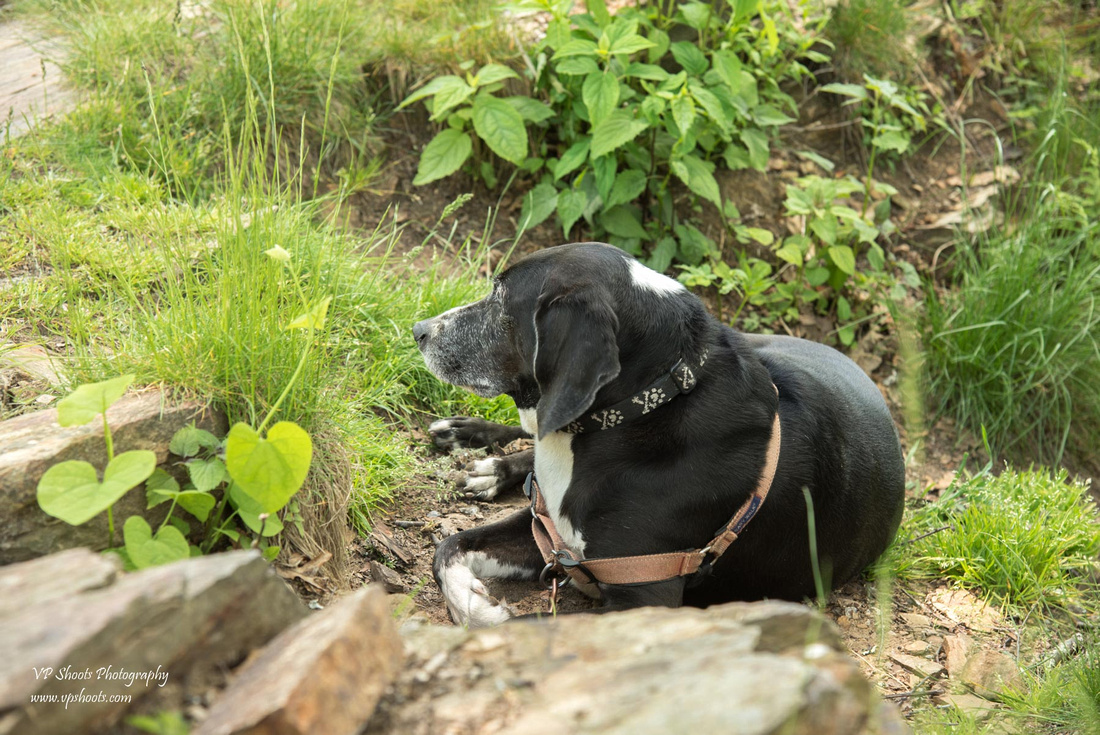 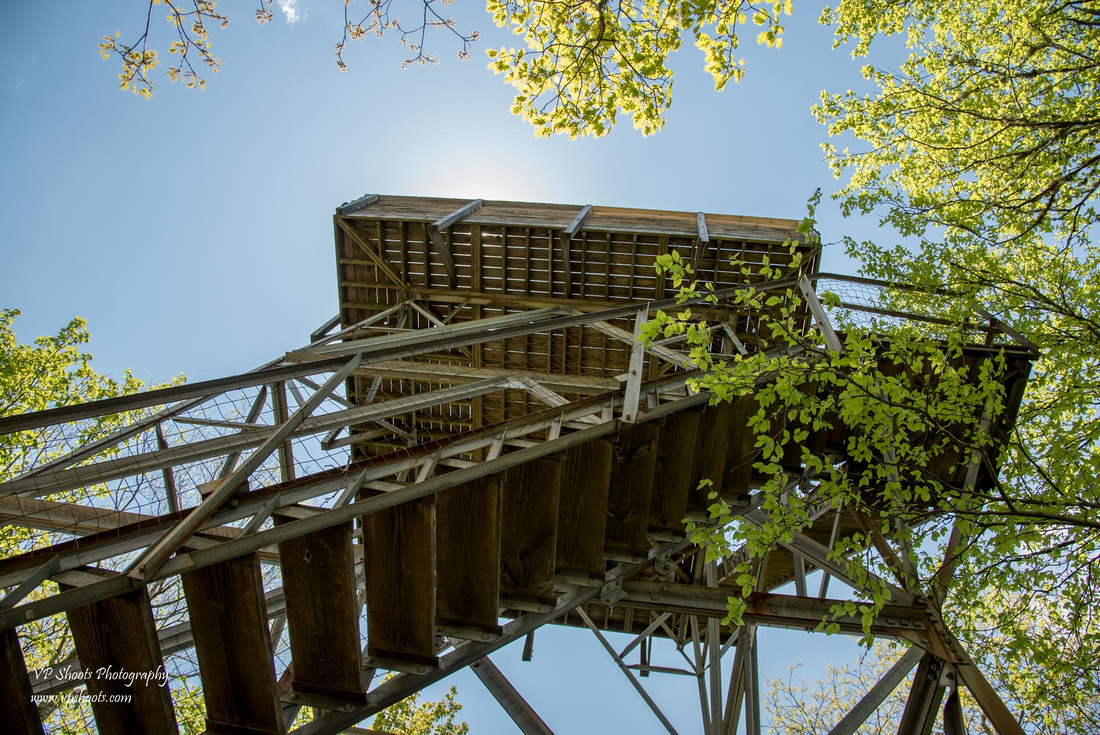 Here's a few photographs that probably don't do this view justice - but you want some clue what you will see when you get there right?  And it's so pretty!  You'll want to do this on a nice day where you can see for miles - don't do it on a rainy bad day if you have any choice (I wouldn't have done this drive on that dirt road).  But, what can I say, it's beautiful. 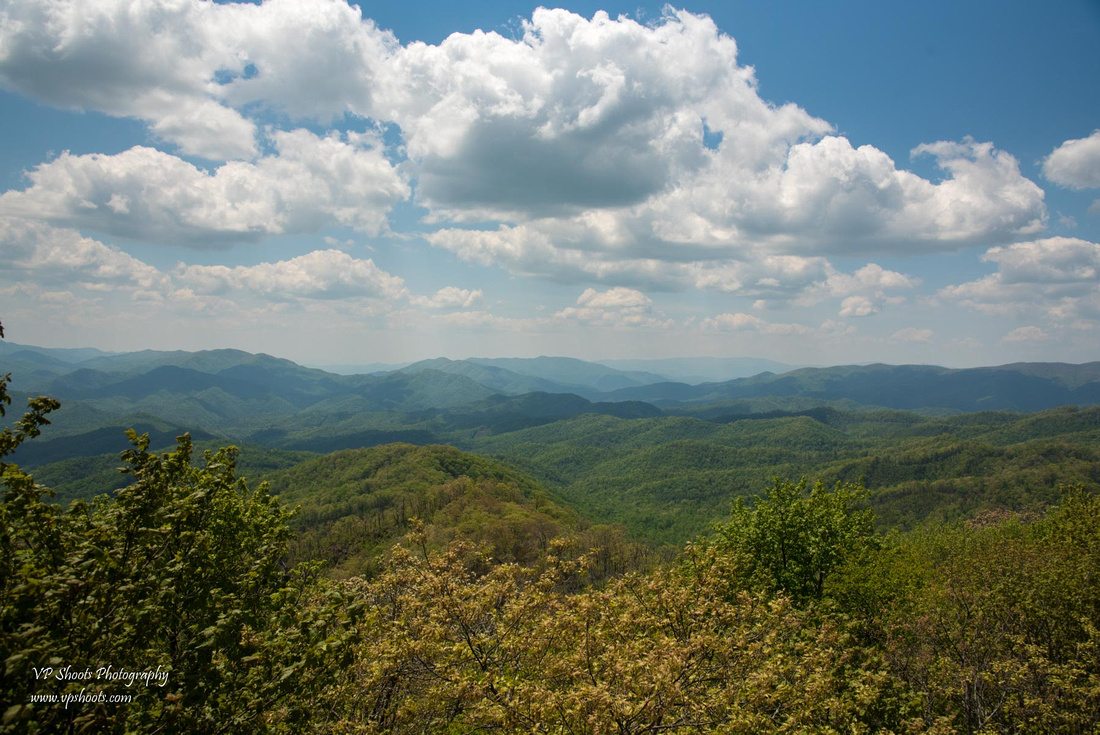 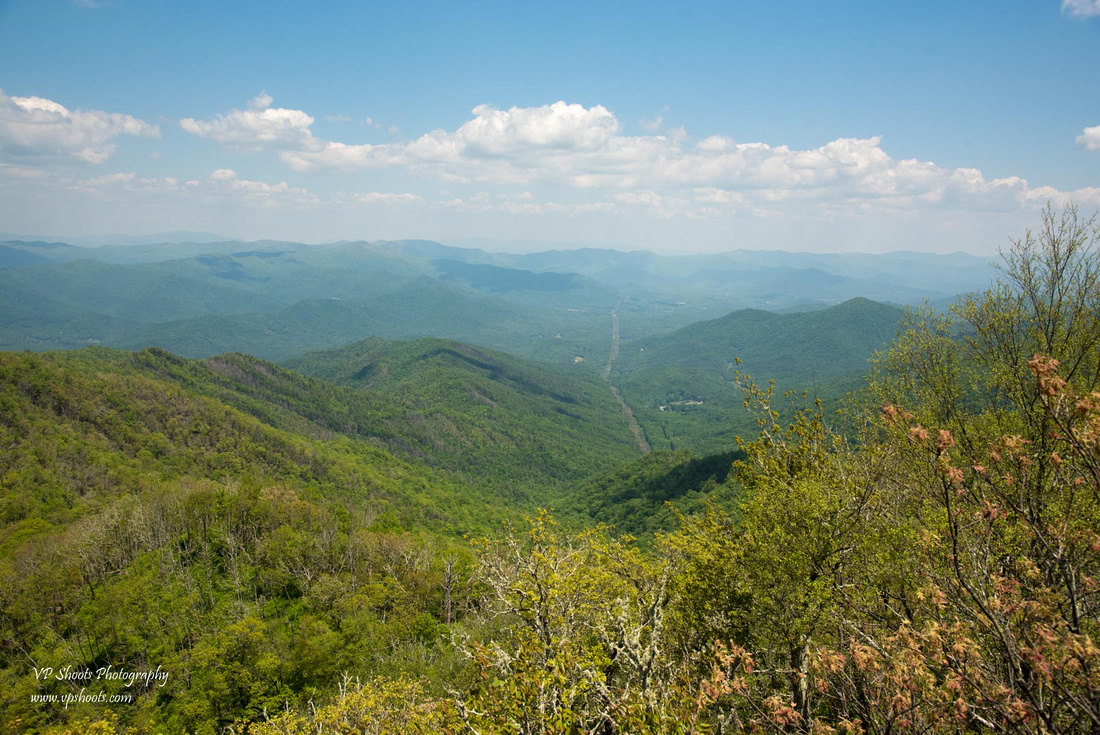 Eventually, after talking with a couple of men that were hiking on the Appalachian Trail - one was pretty young and had been on the trail about 8 days now.  The other was a little older (maybe closer to our ages) and had been on the trail for about 10-11 days (not sure I recall exactly how many).  But they were both having fun doing the multi-day hike.  The younger hiker said he hoped to do the entire trail and end up in Maine most likely in October time period (It's mid May when I am writing this).  Looks like a trail to me, wondering how it could be a 'forest road' - but I guess if they have to get to the top, maybe they use a four wheeler. 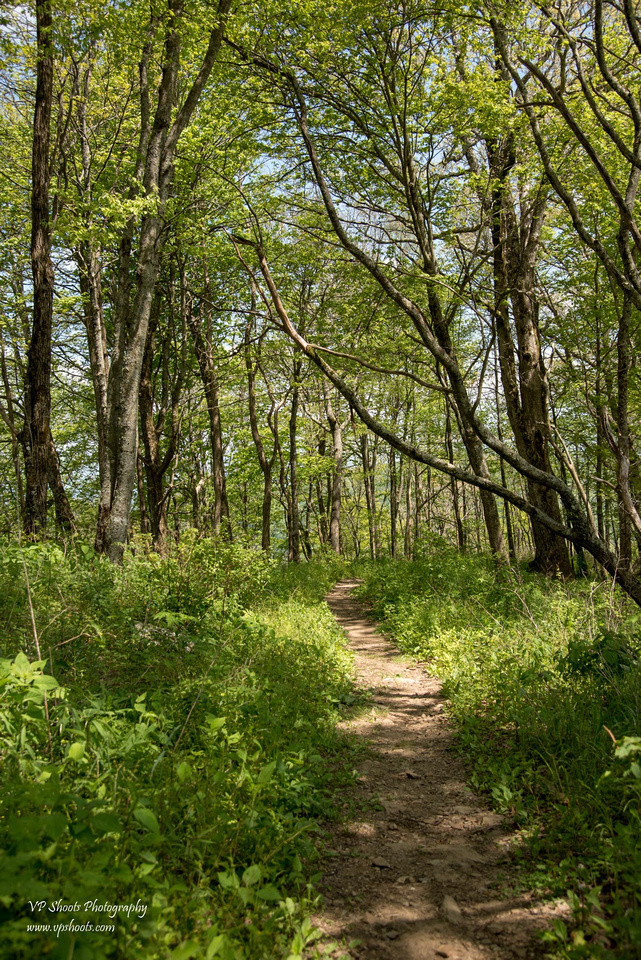 A quick look shows that the other trail (forest road) doesn't look to bad and within an hour we were back at the parking lot.

Jim talked to many of the people that drove up to Tellico Gap and wondered how they got there without any 4 wheel drive - so having said that we decided to take the 'other road'. The one that went down the other side of the mountain and soon we found out that road was a much better road to travel on then the one we came up.  If you come in from the other side, you'll travel on Wayah Road and turn on Otter Creek to head up to Tellico Gap.  For us, this made for a longer drive back - but it was almost all paved roads and another adventure!

I also found this link that is helpful with information about this particular hike should you be interested.  Hopefully it will stay alive and not become a dead link. https://www.hikethesouth.com/hikes/wesser-bald-via-tellico-gap