Bluebirds at the community garden

Bluebirds are a common site in our neighborhood now - I don't recall seeing them a decade ago, but in the last few years they are everywhere - you just have to take the time to look.  Our community garden seems to be a favorite for them - perhaps the vegetables help to provide a source of critters they like to eat.  I had a couple of baby bluebirds in my bird house and the parents were busy feeding them on a 10-15 minute schedule - perfect time to set up the camera and hang out waiting for them to return with the goods for the little ones.

It was interesting that the female bird (not as bright blue as the male) would come in from the east side, kept an eye on me, then flew into the birdhouse.  While the male (brighter blue) would come in from the west side, more leary of me than she was, and flew into the birdhouse.  Perhaps they had different areas they went to find food, but for the time period I watched (about 2 hours), they were pretty consistent.  It was interesting to see what kinds of animals they brought back - each time appeared to be something different - the female brought back a spider the first time. 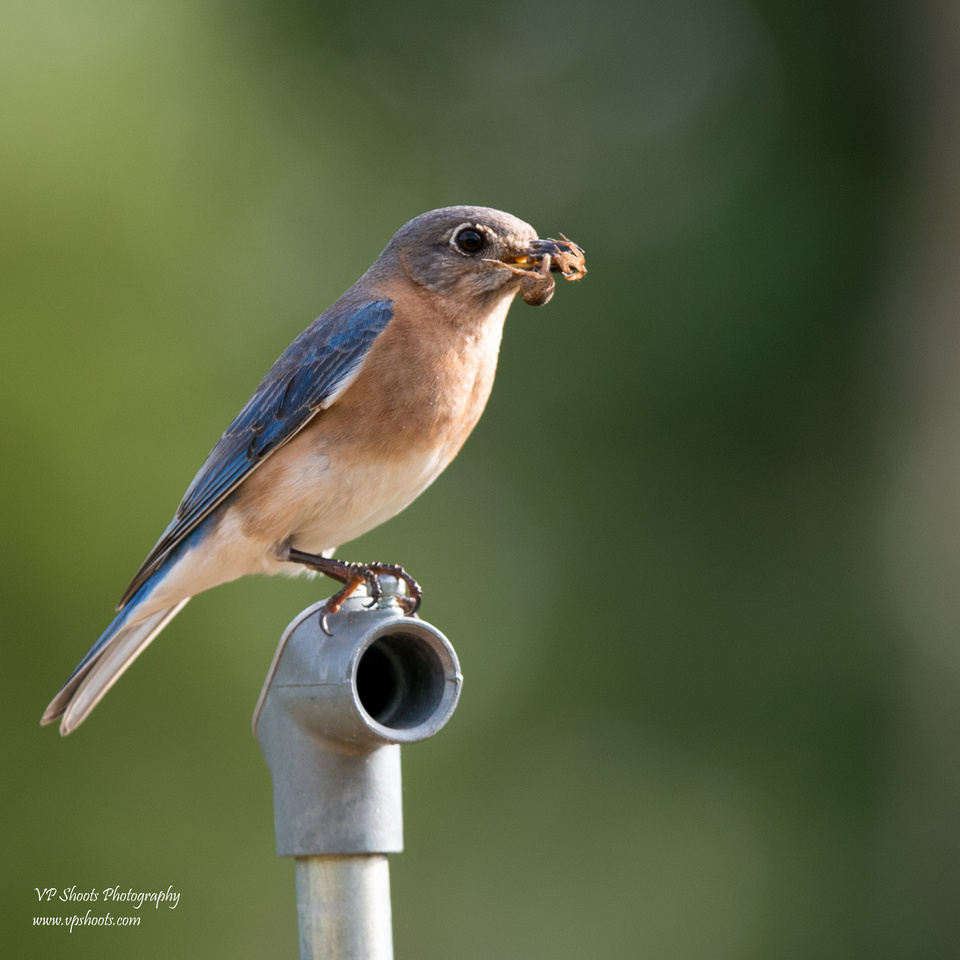 Flying into the bird house purchased at Wild birds unlimited on Dale Mabry in Carrollwood (suburb of Tampa, Florida). 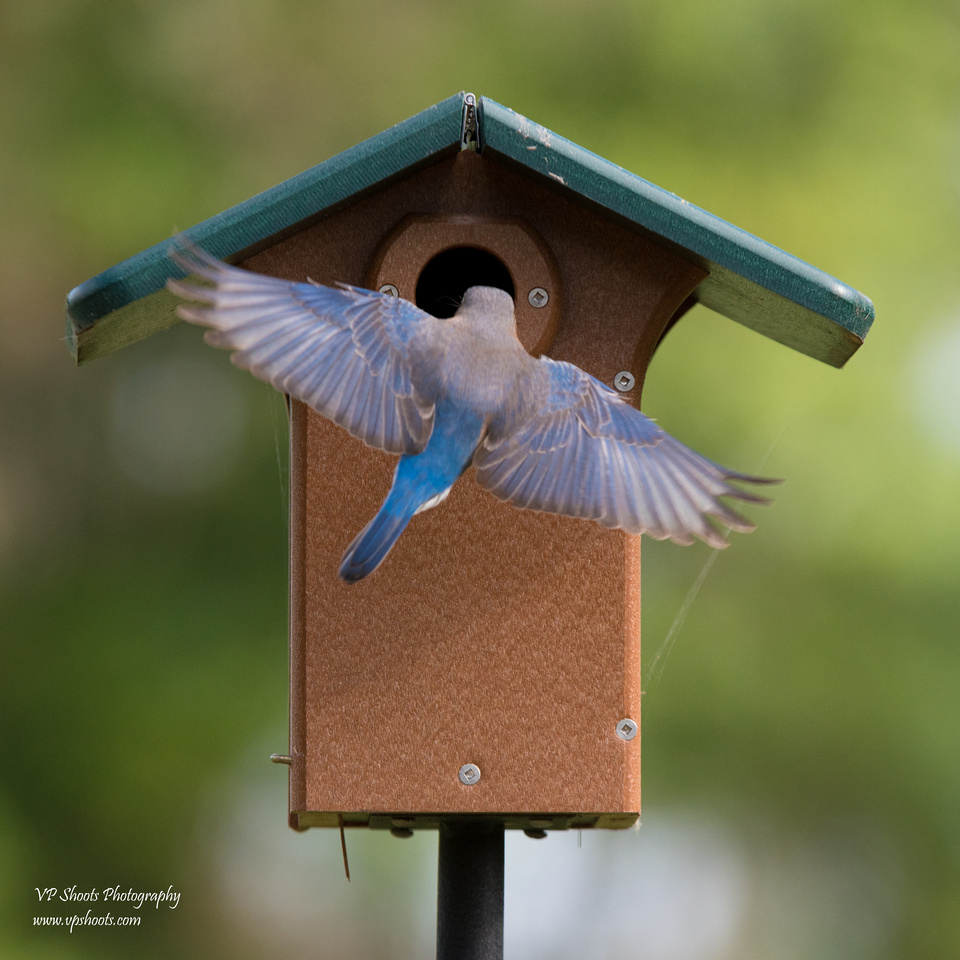 The male came in next landing on top of the bird house and eyeing me to see if that camera was a issue or not.  Looks like he brought back a cricket. 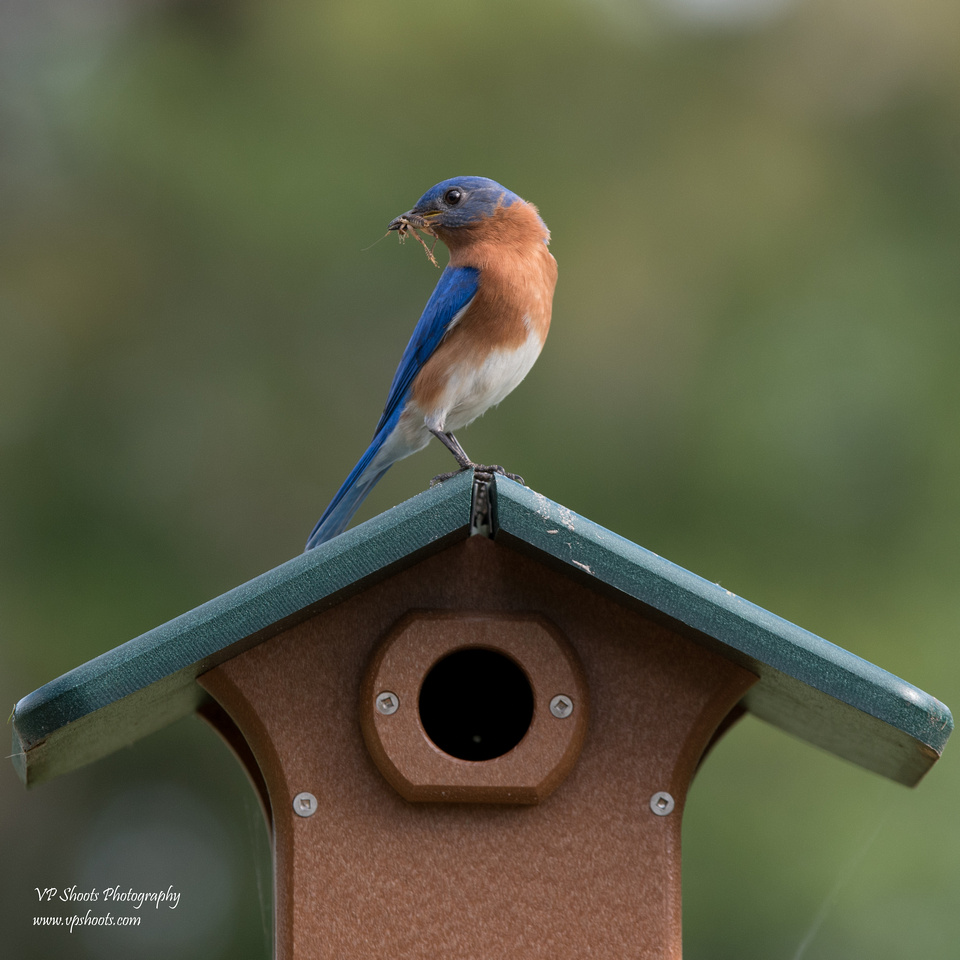 In the house we go to drop off the food for the hungry little ones (there were two in the house). 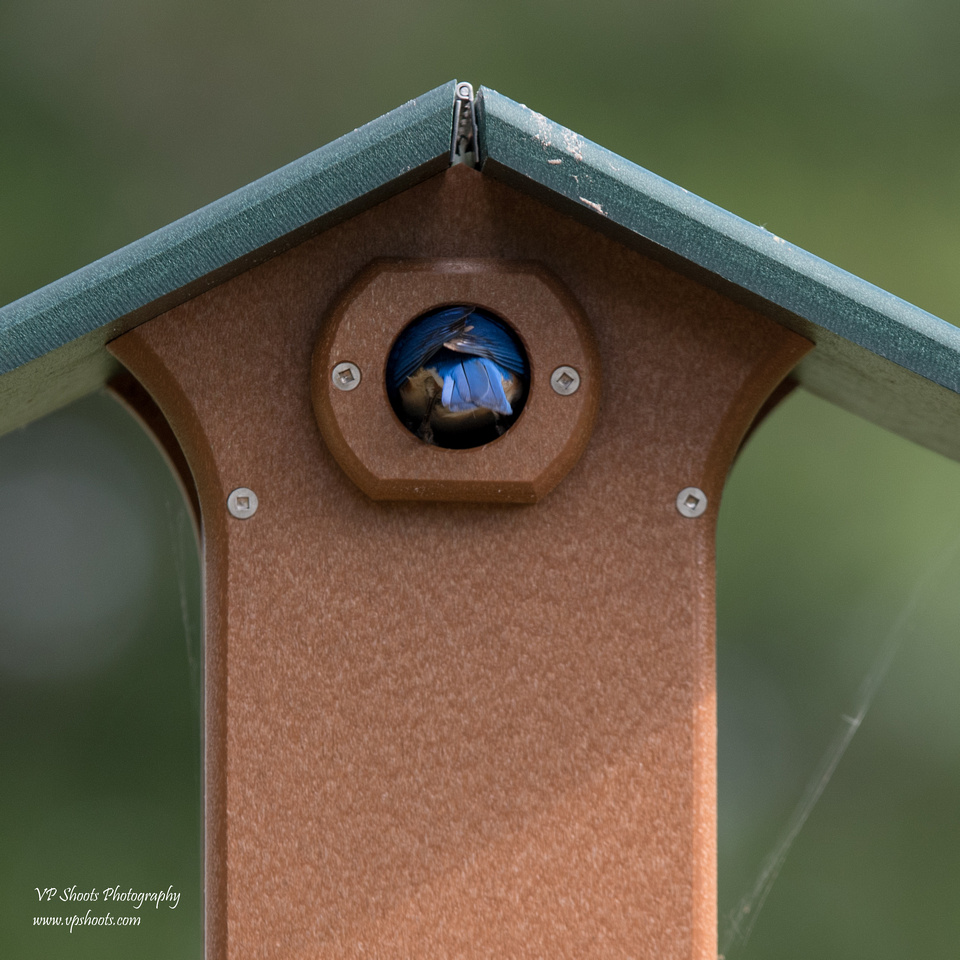 Time to go back out again and find another insect. 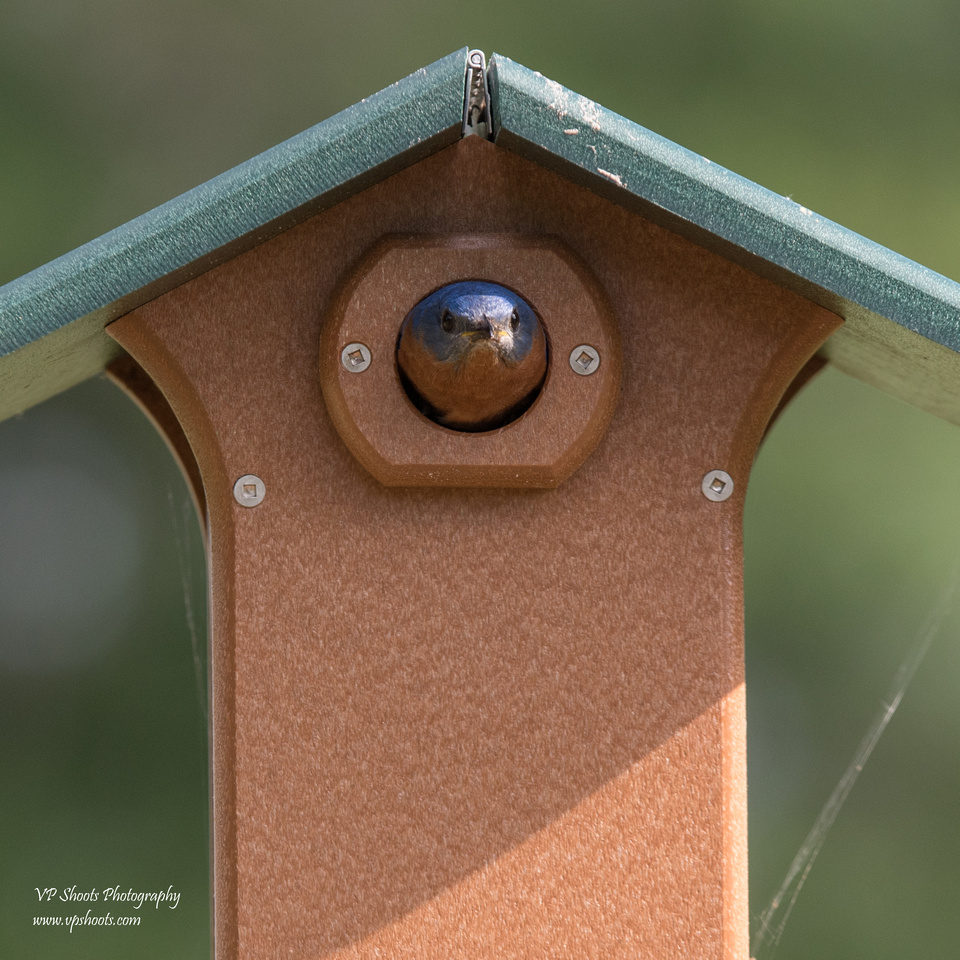 Missed the female coming back (got distracted) so I caught the male coming back again.  He again landed on top of the bird house, this time with a caterpillar of some type.  Circled around to the front of the house. 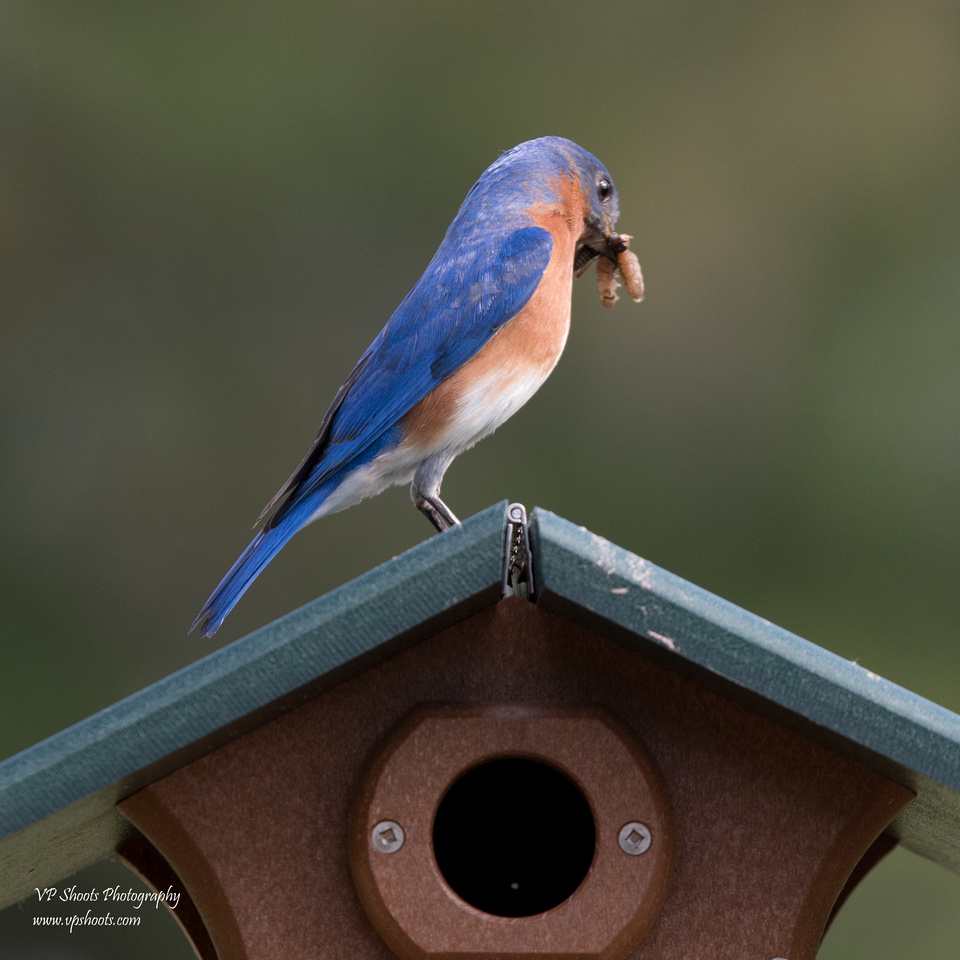 A quick stop to look at where the noise was coming from (the camera shutter). 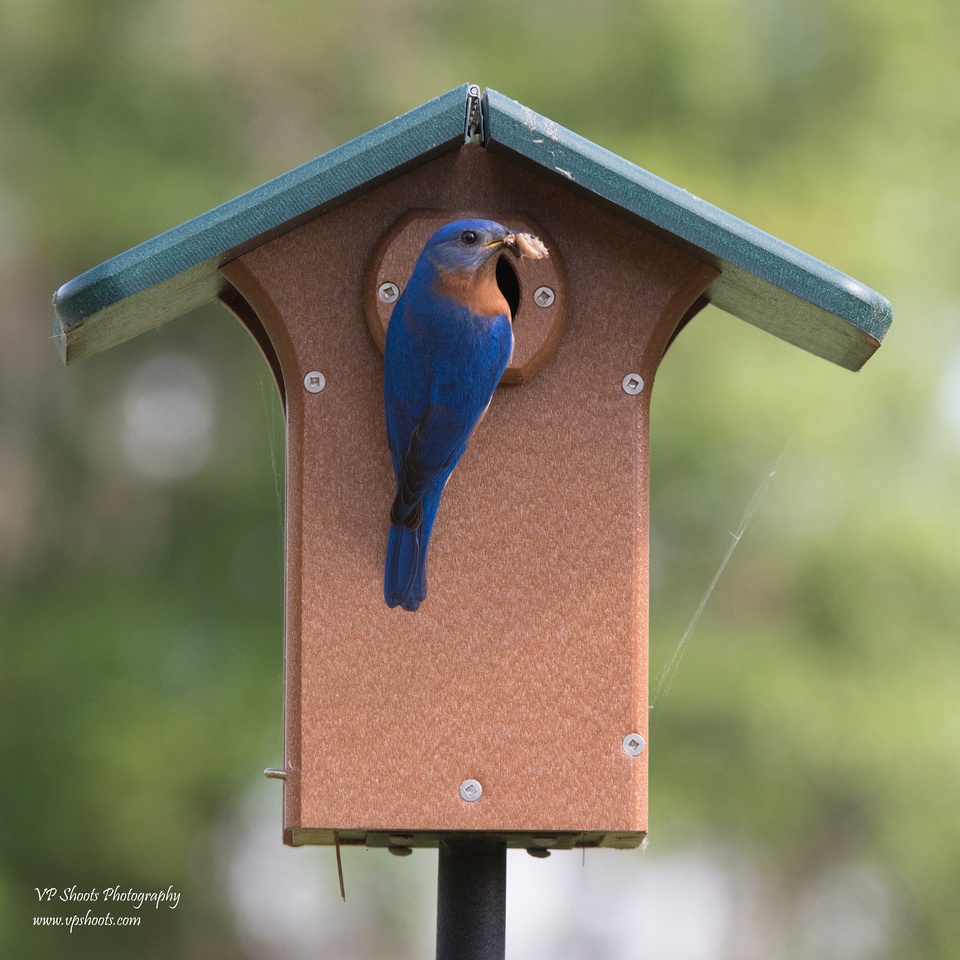 And then into the house to feed the little ones.  This goes on for hours when the young are just about to leave the nest.  I was there watching for the better part of two hours.  These little birds have now left the nest and I'll have to wait for this cycle to start again.  Usually they build about 2 to 3 nests each season and this is the first one this year - so I'll see when they return to start it over again - in the mean time I'll clean it up nicely so they can start again with a new nest as that's what I hear they prefer (no used nests for these birds).

James(non-registered)
Wow very nice!
No comments posted.
Loading...
Subscribe
RSS
Recent Posts
Silhouettes in dog photography Memories of your pet - whether it be when they are young or a senior A walk in Eureka Springs Park, Tampa, Florida What to expect at your Pet Photography session Thinking about professional pet photographs? Photographing big mutts (those large mixed breed dogs we all love) How I pick a location to photograph dogs Dogs in the flower field Collars I recommend for your dog's photography session? My dog won't look at the camera - how do I fix this?
Keywords
canine dog vpshoots outdoor pet photography Florida dog photography pet photography blog park rescue
Archive
January February March April May June July August September October November December
© VP Shoots Photography
User Agreement
Cancel
Continue