This week I traveled down to Ellenton and visited the Gamble Plantation Historic State Park.  The Gamble Plantation is located on U.S. 301 just west of Interstate 75 in Ellenton, Florida.  This is the same exit as the Ellenton Outlet Mall (just turn right instead of left if you're headed southbound on I-75).  I've driven past this old stately home for many years and have always wanted to stop and check it out - so on this hot, muggy morning - I finally had the opportunity.  I am glad that I headed down early as the visitor center has a sign that says the mansion is not climate controlled and temperatures can rise to the 90s. 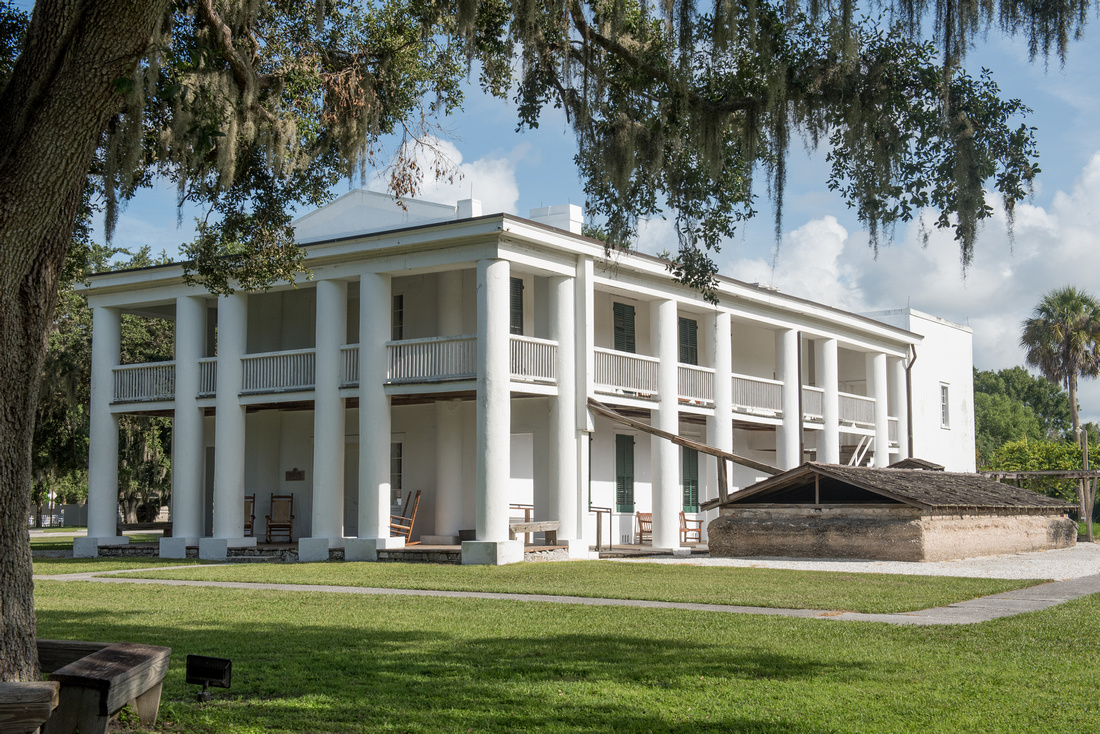 If you like history, then this is well worth a stop to see the historic mansion.  This is the site of the oldest building in Manatee County, Florida.  It is close to the Manatee River which played a role in Robert Gamble stopping here to claim the land after the Second Seminole War ended in 1842.  The park ranger providing us with a guided tour indicated that this land was chosen because Robert and others on the boat got stuck and thus decided this was far enough and should be where they stay.

The view in the photo above shows the front and east sides of the mansion.  "The two story (93 x 43 feet) mansion has ten rooms. The outer walls are nearly two feet thick. Eighteen columns support the roof and upper verandas, which extend around three sides of the building." per information from the state park brochure. 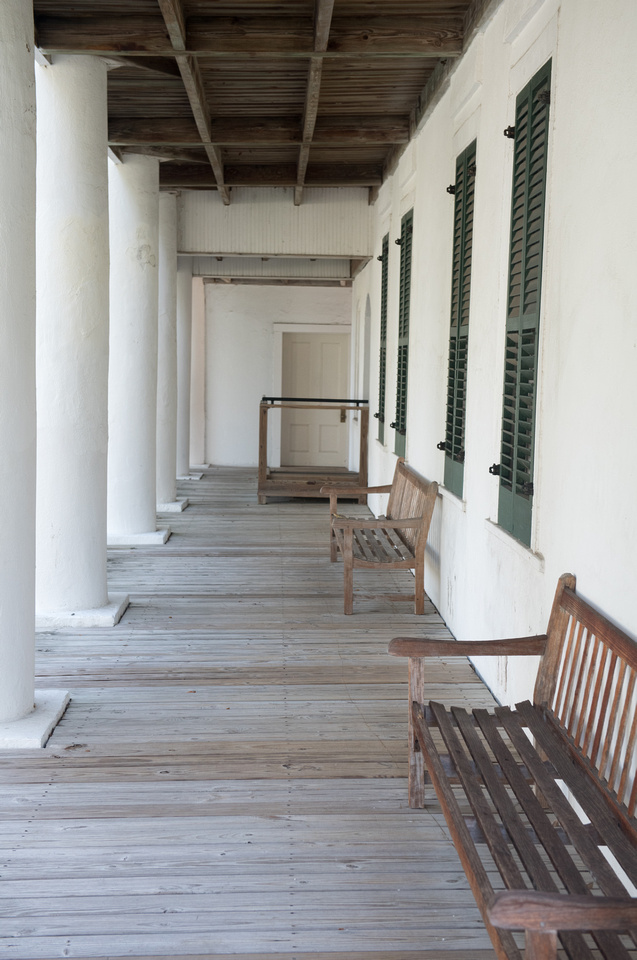 The west wall has benches to sit and relax.  The windows in the house are primarily on the east and west sides to catch the breeze.  Since the walls are almost two feet thick with tabby brick (made from shells local to the area), a photograph railing was created around the top of all the walls to allow for hanging of photographs.  A hook was placed at the top of the railing and string was used to allow the photo to hang down to the location desired. 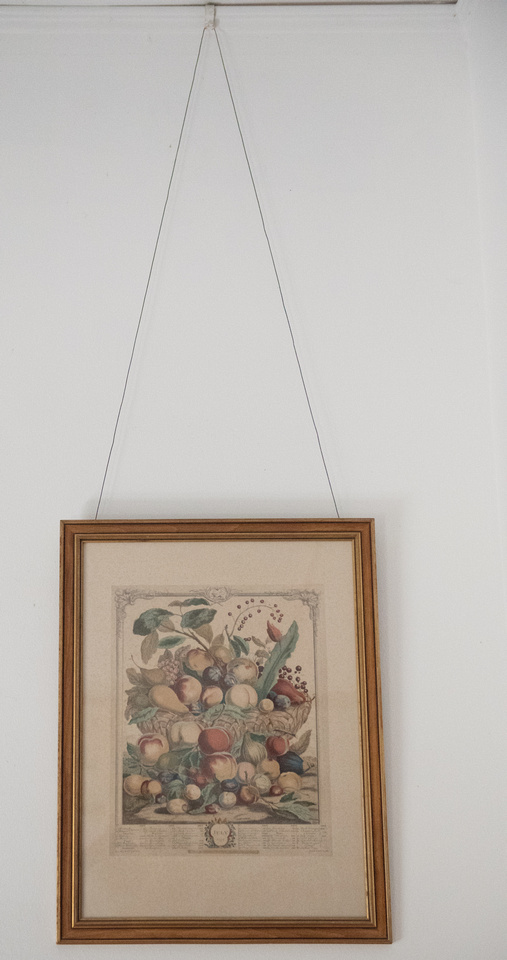 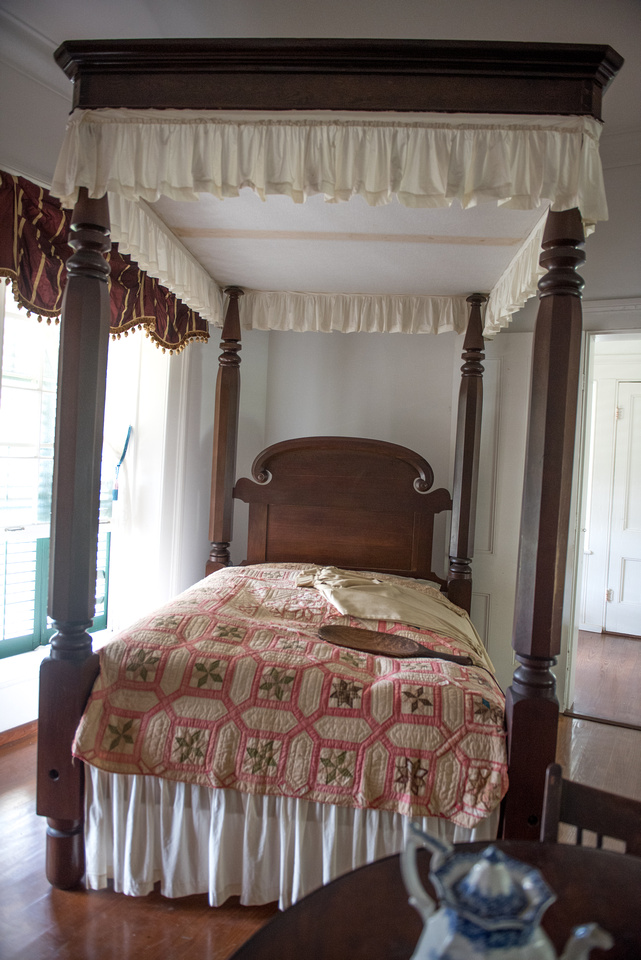 The next bedroom had a four poster bed with rope ties.  Robert, the park ranger, explains that every several days, the ropes had to be tightened in order to keep the bed from sagging.  The old saying "sleep tight" came from these old beds that had to be tightened up back in the 1800s. 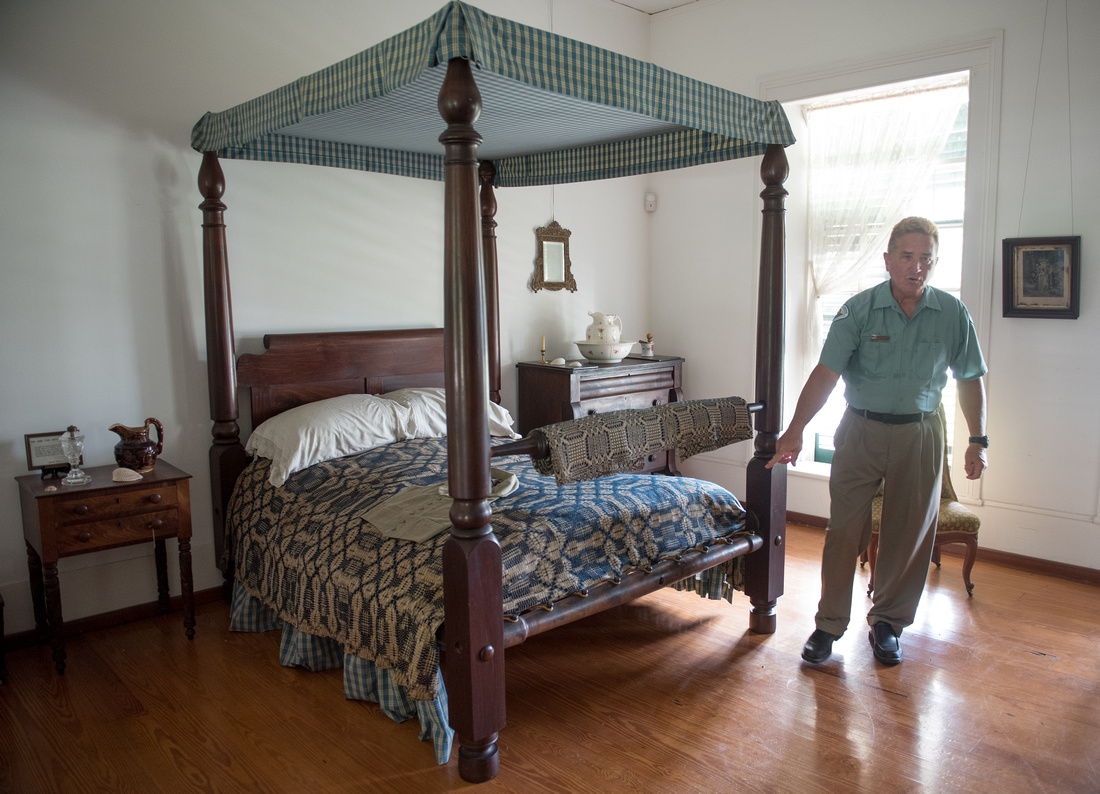 This bedroom containing this bed, had a bathroom! 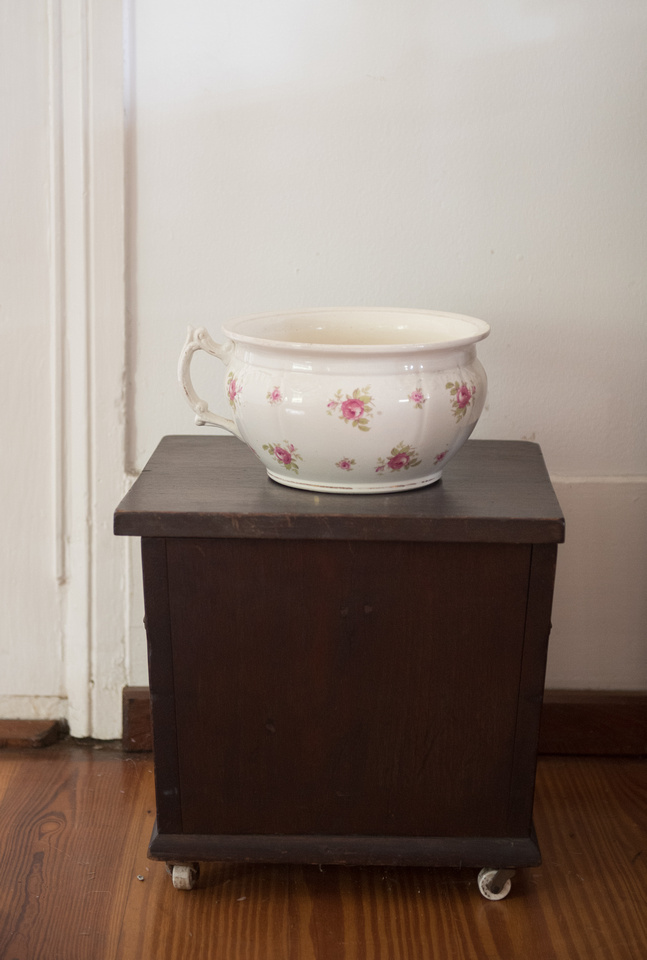 Yep, that's it.  A little porta potty on wheels.  No indoor plumbing in this house.

The hallway on the left side of the mansion is a long hallway with windows and very large window sills that can be used for seating.  Remember, the walls are two feet thick, that makes for a fairly nice place to sit and relax. 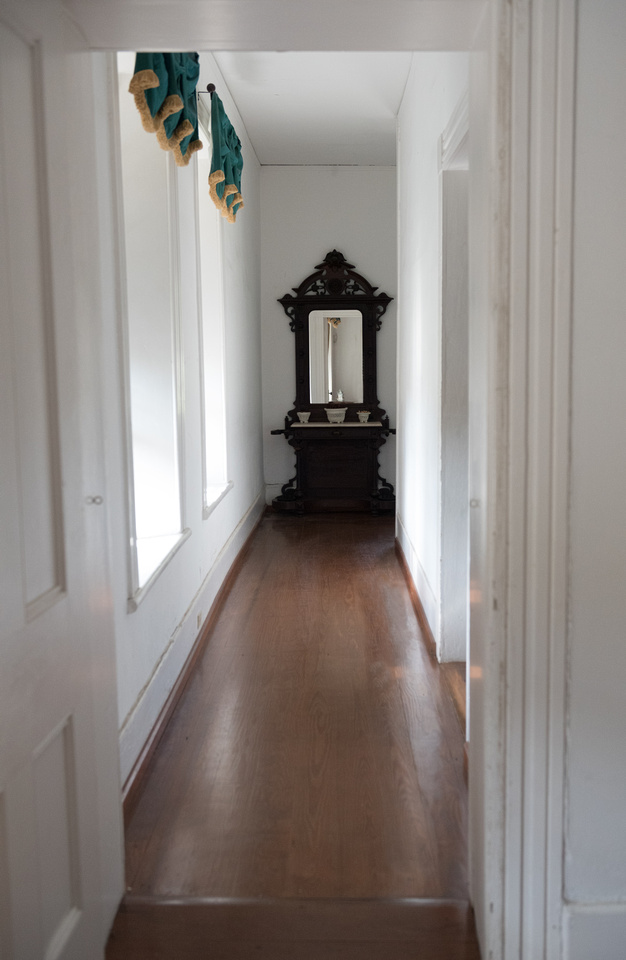 The next room we entered had a very unique clock on the mantel.  Look closely and you'll see that the hands on the clock have a "T" for the hour and an "S" for the minute. 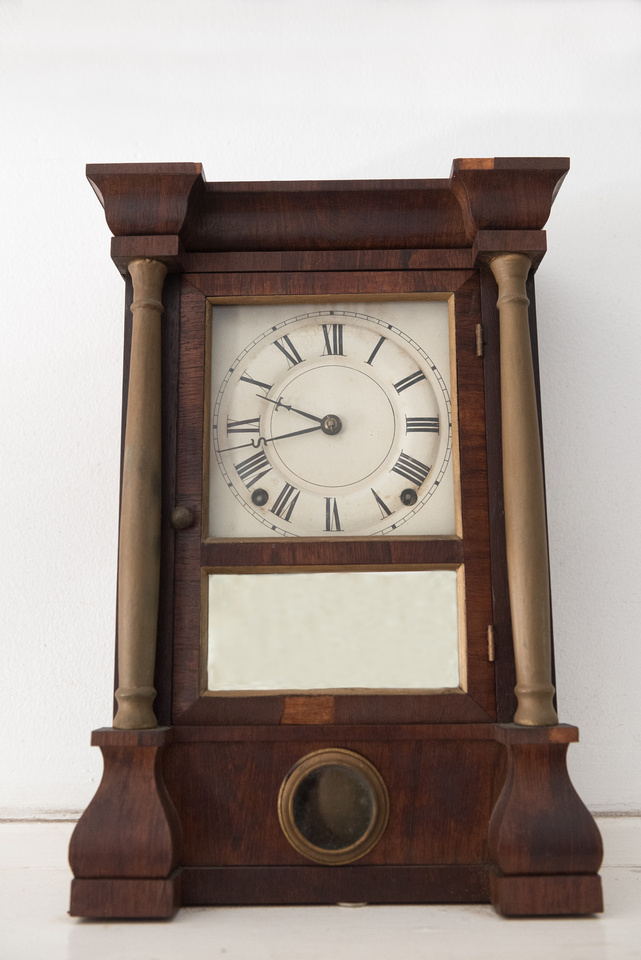 The Gamble mansion was built in three phases.  The photograph below is from the first phase of the house.  It has the original flooring which has a stone look but is most likely the same material the house is made of (this I am not certain, as I was focusing on taking photographs and missed some of the commentary as Robert told us about the house and family that lived there). 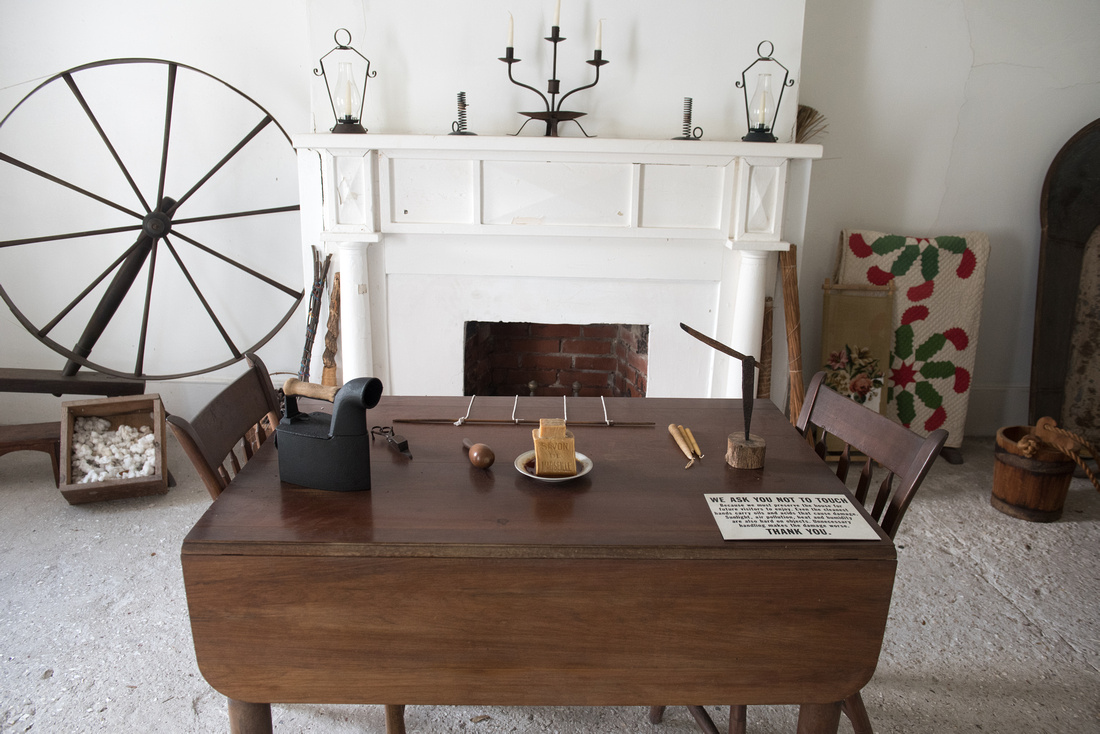 The east side of the house. 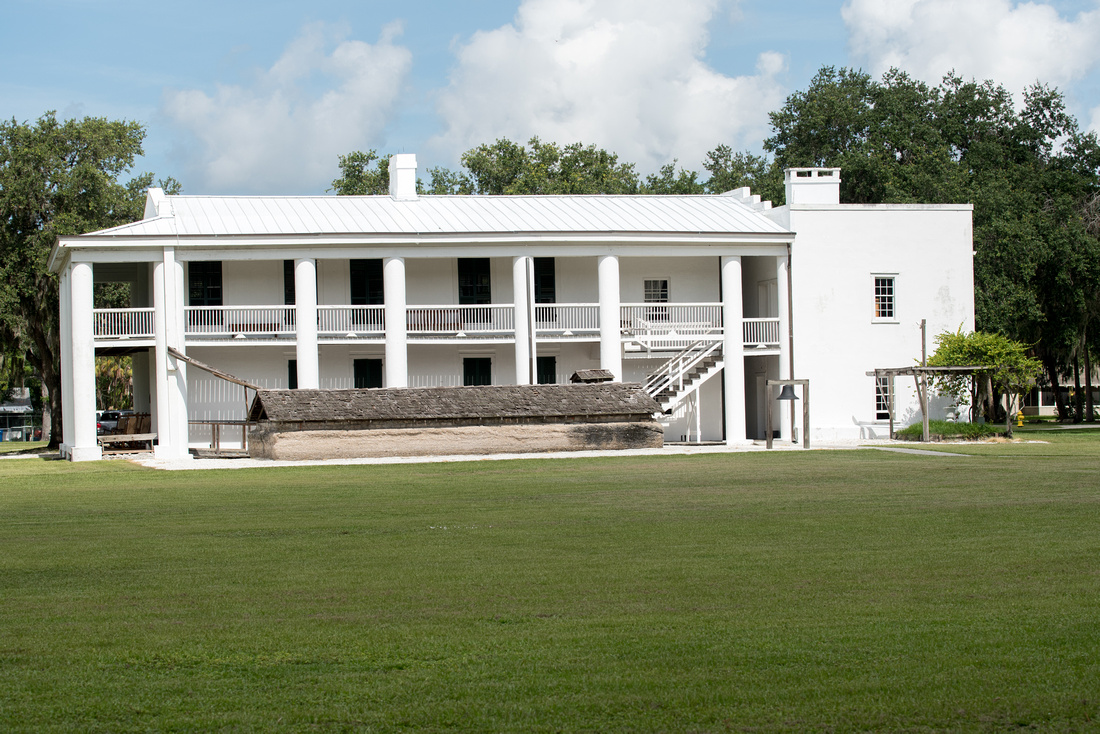 "The land and house was sold to Major George Patten for $3000 in 1872.  In 1895, the Pattens abandoned the mansion to avoid the high cost of maintaining the aging and decaying house." per information at the visitors center for this state park.

The grounds and picnic areas are open each day from 8:00am until sunset.  The mansion is open Thursday through Monday for scheduled tours at various times.   Note that Robert is the park ranger at this state park.  When Robert is giving tours of the Gamble mansion, the visitor center is closed (something to keep in mind).  The visitor center is air conditioned.  You are allowed to take all the photographs you want, but if you're taking a tour of the mansion, you need to stay with the group so as not to annoy the others on the tour.  Check their website as these may change over time as well as the nominal fee.  The address is 3708 Patten Avenue, Ellenton, Florida - enjoy a trip back into the past!