This week’s theme is “Landmarks” and I decided to return to a small memorial park that is a landmark in our city of Temple Terrace.  I am sure that most everyone has heard of the man this memorial park is named for, but few know that he started his career here in Hillsborough County, back in January 1937 when he transferred to the Florida Bible Institute.  The Florida Bible Institute occupied a Spanish style building originally the Temple Terrace County Club clubhouse on the banks of the Hillsborough River in Temple Terrace.  This man, William Franklin Graham, Jr., was born on November 7, 1918 in Charlotte, North Carolina.  Most know him as “Rev. Billy Graham” who just recently passed earlier this year (February 21, 2018 in Montreat, North Carolina).

Billy came to Temple Terrace as a skinny, tall, 18 year old.  He was here in Hillsborough County for 3 ½ years.  In his autobiography he says that he would paddle his canoe across the river to the little island and practice his sermons on the creatures of the river.  All the creatures – from the birds to the alligators that resided on the island.  Billy’s fellow students teased “How many converts did you get today, Billy?”

In Billy’s autobiography (Just as I Am: The Autobiography of Billy Graham), he says that he received his calling from God on the 18th green of the Temple Terrace Golf and Country Club which was across the street from the Florida Bible Institute.  Today, just to the east side of North Riverhills, east of the 18th green, is a small memorial park to remember Billy Graham.

We set out early Sunday morning to take a few moments and remember him, as well as read the historic sign placed in 2011 in hopes that all will remember his early beginnings before the world knew him. 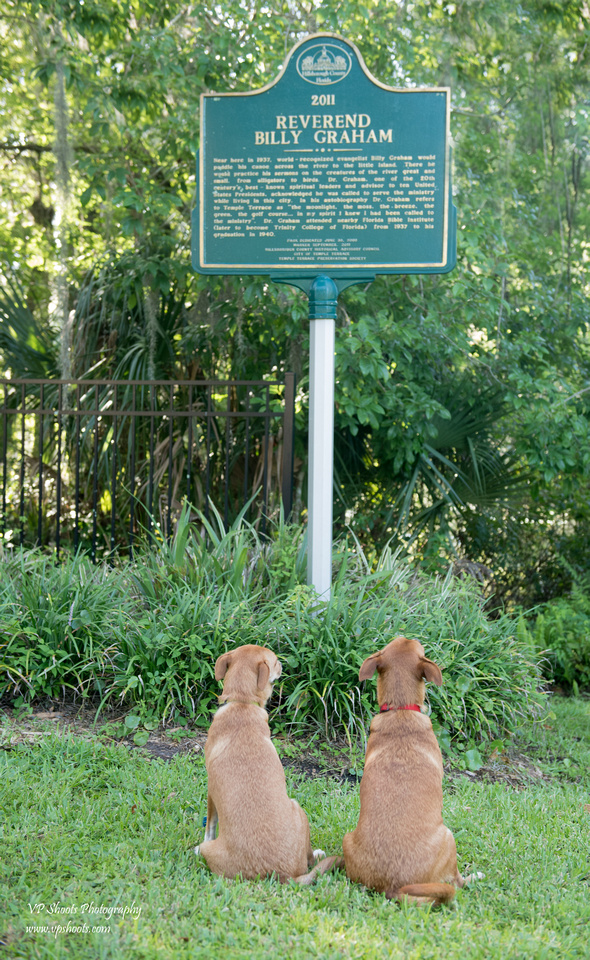 Our little puppies, now almost grown up, sat and 'read the sign'.

Rue says "Oops, I think someone is watching us!" Ollie says "I am not done reading yet." 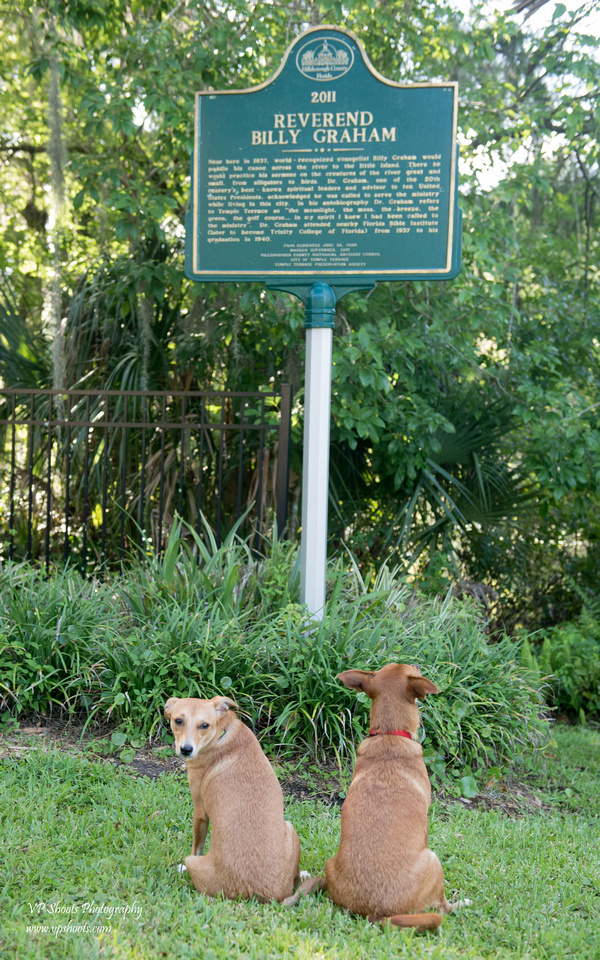 They sat and read the sign and it says "Near here in 1937, world-recognized evangelist Billy Graham would paddle his canoe across the river to the little island. There he would practice his sermons on the creatures of the river great and small, from alligators to birds. Dr. Graham, one of the 20’s century’s best known spiritual leaders and advisor to ten United States Presidents, acknowledged he was called to serve the ministry while living in this city.  In his autobiography Dr. Graham refers to Temple Terrace as “the moonlight, the moss, the breeze, the greet, the golf course… in my spirit I knew I had been called to the ministry”.  Dr. Graham attended nearly Florida Bible Institute (later to become Trinity College of Florida) from 1937 to his graduation in 1940."

After we finished visiting the Billy Graham Memorial Park, we went up the hill to the Woodmont Clubhouse originally build in 1928.  Historically, the clubhouse initially served as a horse stable for winter visitors and full time residents.  Later, it was converted into a one room school, then a multi-room schoolhouse.  In 1955, when a large portion of Temple Terrace began a building boom, Temple Terrace Elementary School opened it's doors to serve the children in the city.  At this time Woodmont was left vacant.  After a period of time, it was taken over by the Temple Terrace Garden Club and is now maintained by the club.  The building is used for special occasions, events in the city and has been remodeled since the early days. 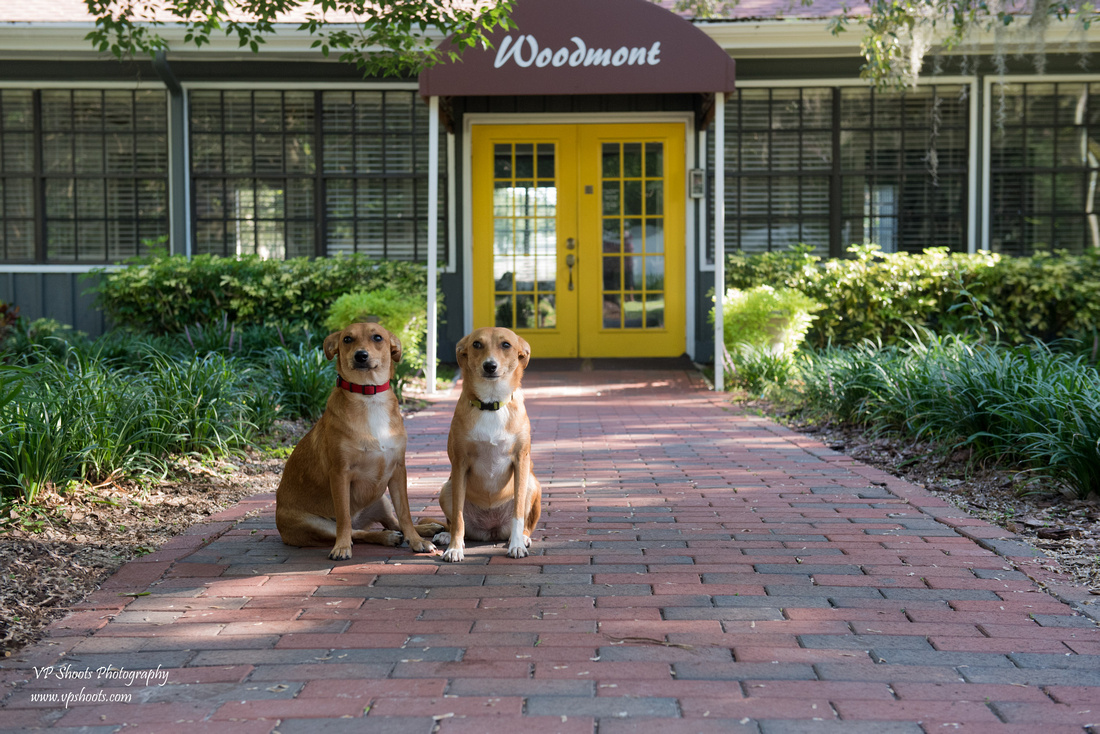 For more pet photographers sharing their take on this theme, head over to visit Pawparazzi Pet and Animal Photography presented by Shae Pepper Photography  and then head around the rest of the blog circle.

If you would like to book a custom pet portrait session, send an email to [email protected] or give us a call/text at 813-610-2671 in the Tampa Bay area (Florida).

Nancy(non-registered)
What a nice little bit of history. Rue and Ollie are adorable.
Susannah(non-registered)
What a cool story to include. I live how it looks like they really are reading the sign.
Elaine(non-registered)
Such CUTE photographs to go along with the story. Loved it!
No comments posted.
Loading...
Subscribe
RSS
Recent Posts
Dog friendly lakes, Western North Carolina A walk at dog-friendly Lettuce Lake Park in Tampa, Florida St. Patrick's day dress up for the dogs Photographing for local pet rescue Number one reason to have photographs taken with your pet Dog Photography, People Photography, Wedding Photography - a look back at the year 2021 Holiday Pet Portraits with dogs Fall Pet Photographs with two special dogs looking for their forever home Silhouettes in dog photography Memories of your pet - whether it be when they are young or a senior
Keywords
canine dog vpshoots outdoor pet photography Florida dog photography pet photography blog park rescue
Archive
January February March April May June July August September October November December
© VP Shoots Photography
User Agreement
Cancel
Continue