See Rock City - finally we did!

For decades I remember driving along the interstate and seeing signs on barn roofs, on billboards, and a few others places - they all said "See Rock City".  You know, the traditional red barn, and on the roof the words "See Rock City" were painted.  While we were staying at Cloudland Canyon State Park, we drove around and I saw little arrows (not barns) that pointed the way to "Rock City".  So what the heck, we had our dogs with us, but let's go see what it's about and then decide, should we go see Rock City? I saw a young man leaving the park that looked like he just finished his shift - Jim, ask him what it's about (please).  So he did and the big question was, "Are you dog friendly? We have our dogs with us right now." - Wow - he said, did I hear that correctly - Yes!  So for all you people out there that might be travelling with a canine, this is a place you can enjoy and your dog will too.

I'll have to say, Jimbo and Abby were probably the only dogs there this late afternoon and there were more than one group of people asking if they could either pet our dogs or have a photograph taken with them.  Guess they were a bit of a rare occasion.  The entire park is a 3/4 mile loop through gardens, rocks, caverns, and fun things that make for an interesting time.

As we walked through the park, they have signs that provide some information.  This one told us how the area was initially discovered back on August 28, 1823, (that's they day before my birthday - a different year of course!).  "In 1823, Two Missionaries named David Butrick and William Chamberlain came to the Lookout Mountain area to minister to the Native Americans. On August 28, 1823, Reverend Butrick made an entry in his dairy stating, 'In company with Mr. Chamberlain, I ascended Lookout Mountain to visit a citadel of rocks.' He went on to describe the immense size of the boulders, which seemed to be situated in such a way 'as to afford streets and lanes.'" (that's the entire verbiage quoted from the sign at the park).

The owners opened "Rock City Gardens" to the public on May 21, 1932, during the Depression.  Here's a few photographs from our walk through Rock City.  As we entered, we see a water wheel on one side (below) and lots of rocks with some small waterfalls on the other side.  This looks like a nice peaceful late afternoon time to visit - not a lot of people and all the school children have gone back to school and/or home. 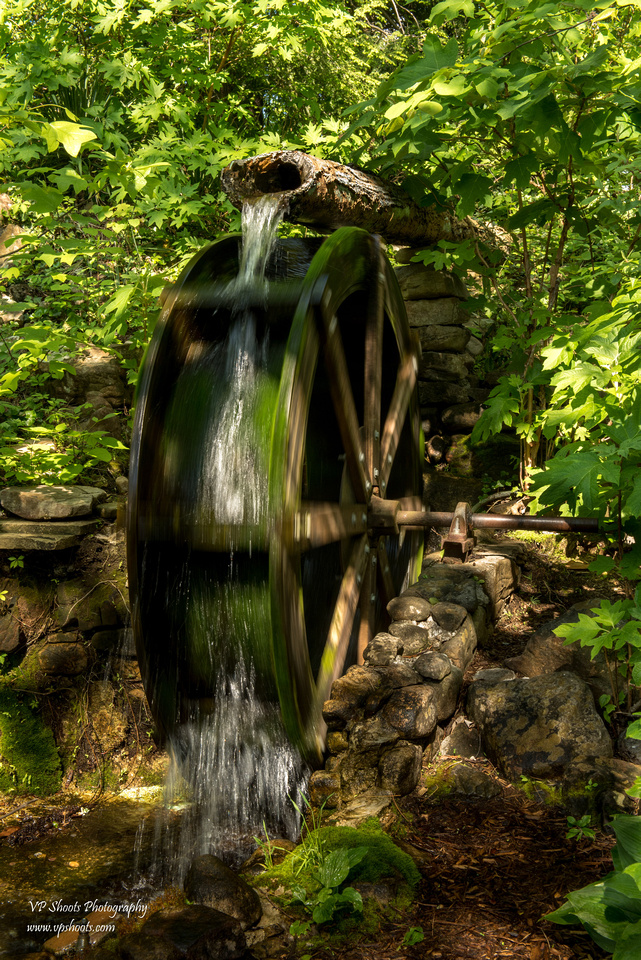 Frieda Utermoehlen Carter incorporated gnome statues into her gardens within Rock City. Later they were moved to their own area in Fairyland Caverns, and now you can see dozens of them throughout the park. See how many you can count here at Gnome Valley and all along the Enchanted Trail!  (we didn't count, you will have to do that) Jim took a photograph of the gnome that was flying a plane - I think that was his favorite of the gnomes.  They say the gnome life expectancy is 400 years!  I guess they will be here for some time to come.

Goblins Pass was the first underpass (or tight squeeze) I remember on the enchanted trail.  Before us where several people and one of them looked to be at least 6'5" if not 7' - I'm sure he had fun.  I'm 5'5", so I didn't have any issues. Needle's Eye - a small opening between some very large boulders. 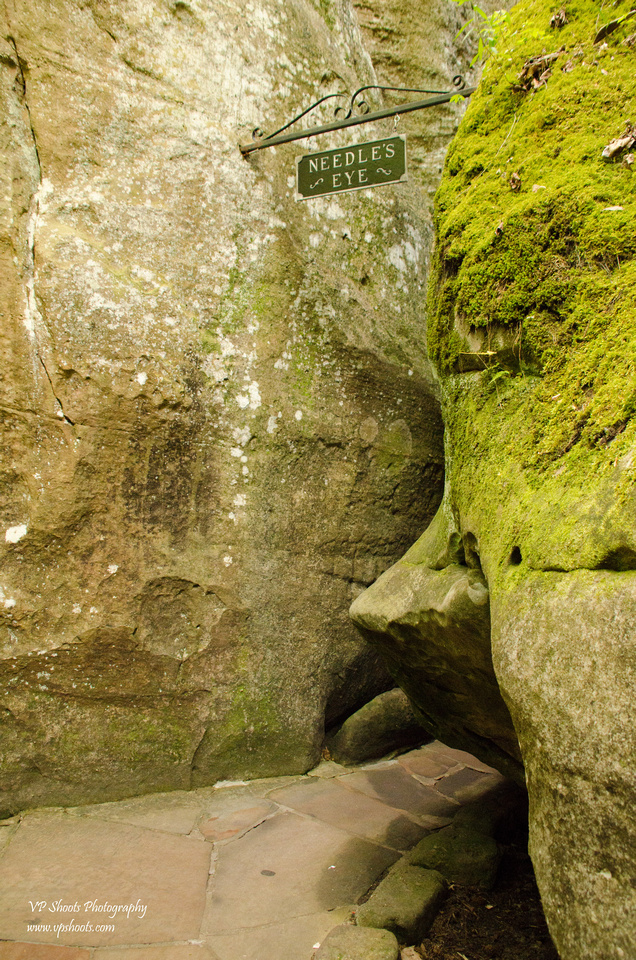 Narrow passage way and I was very happy that our dogs trusted us enough to follow us through on the enchanted trail.  Here's Jimbo and Abby waiting while Jim took a photograph. Fat Man's Squeeze - yes, be careful, I had to take off my backpack and then try to figure out how to squeeze through sideways while carrying my camera gear.  A nice girl asked if she could help - I gave her my tripod - otherwise it was going to be 'slow going' trying to get all the gear through this little crevice!  Strangely enough, the dogs didn't seem to have any issues with going through.  Not that they are fat, but they didn't mind being totally surrounded by rocks with a small pathway. There is a swinging bridge (ugh) but you can take the safe route across the stone bridge too - either one, but to continue on the walk, you must cross one of these.  The dogs and I took the swinging bridge - I don't like heights - hence there are ZERO photographs of Jim crossing on the stone bridge because I was too scared to do anything but look directly in front of feet! Lover's leap has a beautiful scenic overlook.  From this area, you can view portions of 7 states on a clear day! High Falls is just under Lover's leap - where water falls a fairly good distance down into a pool of water. 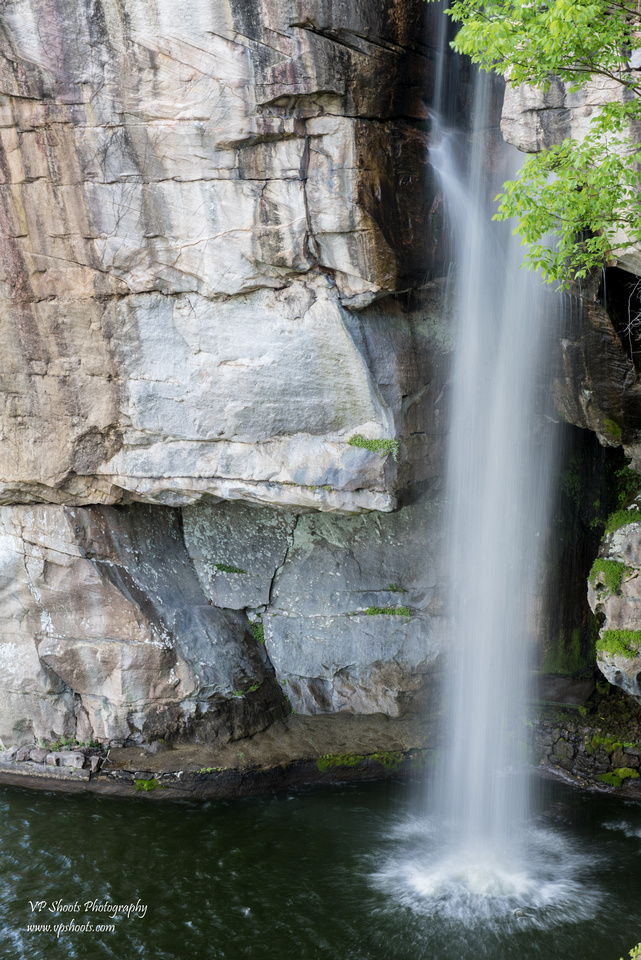 One of the coolest places is Fairyland Caverns.  Now, this is actually a cavern of quite some size and it is cool inside (a nice break from any potential heat that might be happening outside).  When we visited, outside temperature was probably close to 80.  Inside the Fairyland Caverns, it was a nice cool temperature - very pleasant (I assume around high 60's or low 70's). It's dark inside this cavern and it's wonderfully decorated inside.  Be careful, portions are wet due to water still dripping through the rocks as you see all the wonderful displays that have been created.  You must be able to navigate through low light as well as some stairs to go through this part of the park.  Here's Snow White and they are very vibrant - minimal enhancements were done to this photograph. 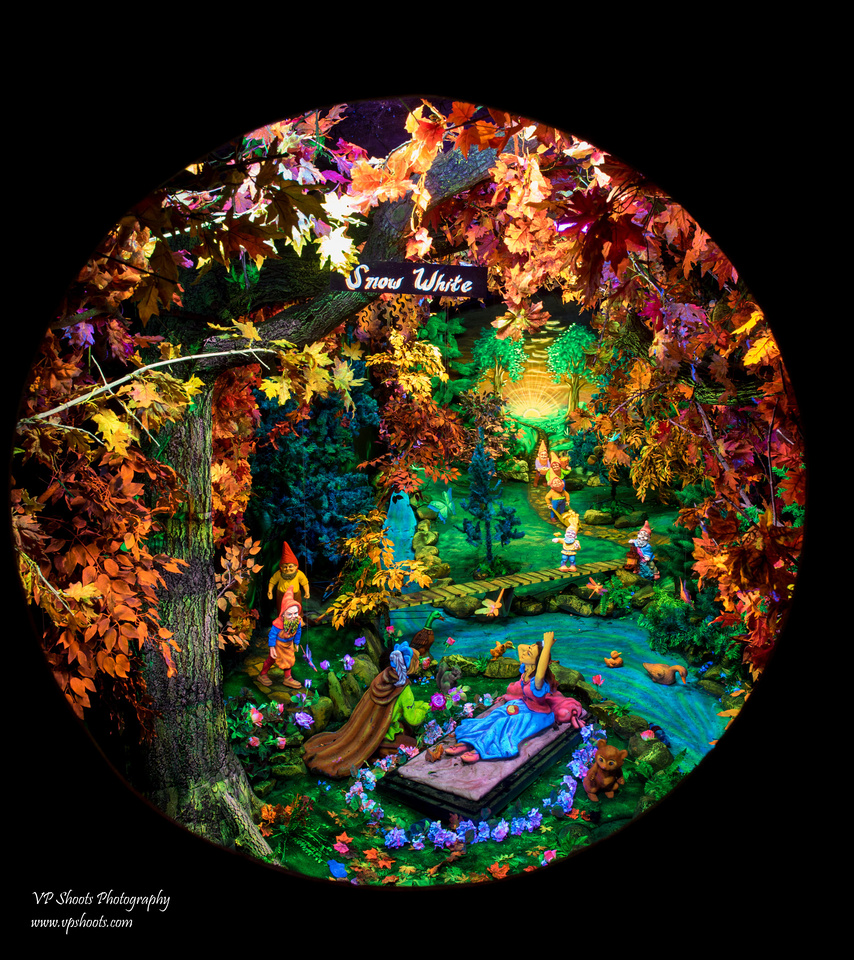 They have many different wonderful displays - some are fairy tales, some mother goose, enjoy all the wonderful scenes.  There are areas where they have lights within the cavern as you walk along an area that is long and narrow (but not real narrow).  You can see some of the steps within the cavern in this photograph. All kinds of fun things like that that are natural for the adults and kids alike to enjoy.  Just in case you're hungry, they do have several different places you can purchase food and enjoy your stay longer.  They also have a gift shop at the end of the enchanted trail.

While most of the areas you see in our photographs are not "ADA", they do have an ADA/Limited Access trail for wheelchair and/or strollers.  To enjoy all the enchanted trail, you need to have the ability to walk as well as do some stairs (up/down), and either go around fat man's squeeze or not to to large such that you can't make it through!

I have to say "Thank You" to Rock City Gardens was created by Frieda Utermoehlen Carter – a German immigrant with a love for German folklore.