I love to shoot waterfalls.  Something about the variety of waterfalls, the fact that we don't have any in my area (there is one in northern Florida) - who knows, but I love to shoot them.  Within Cloudland Canyon State Park they have two different waterfalls - Cherokee Waterfall and Hemlock Waterfall.  At the beginning of our visit, we talked with the rangers when we checked in and I found out that the waterfalls for this particular park are accessed by stairs.  And when I say stairs, the ranger said about 600 stairs to the first waterfall (Cherokee) and about 1000 stairs to the second waterfall (Hemlock).  Now, I'm not sure that I could do this number of stairs in a short period of time, but I am sure that given enough time I could do them.  However, Jimbo (dog) cannot.  He has hip and/or knee issues due to being a little older and that's not an option for him.  In addition, the ranger said the stairs are 'grated metal' - that's not good for the dog's paws and some won't walk on it anyway.

So, my dilemma was, do I pass on seeing the waterfalls? Or do we figure out another way?  On our second full day at the park, when we returned to our cabin we found that a park ranger and another vehicle were there.  Hmmm, why?  On closer look, Jim said it looks like they are replacing the air conditioner (which we didn't really need being that the temperatures were nice and we are from Florida so we don't like it real cold anyway).  After our morning hike, I personally wanted to take a nap before we headed out late afternoon for more fun.  That didn't look like it was going to happen...but, with a ranger at our cabin and most likely very knowledgeable - we asked him about whether there was another way to get to the waterfalls - one without 600 stairs!

He told us of another way that would eliminate a good number of the stairs (yay!)  The next day we set out to hike part of the West Rim Trail (not on the loop part we did earlier in the week) and go to a waterfall.  The first waterfall on the trail is Cherokee Falls.  We managed to navigate the first set of about 20 stairs without much issue.  Then we came to the 'final' set of stairs that took us to the bottom of the canyon where the waterfall is located. 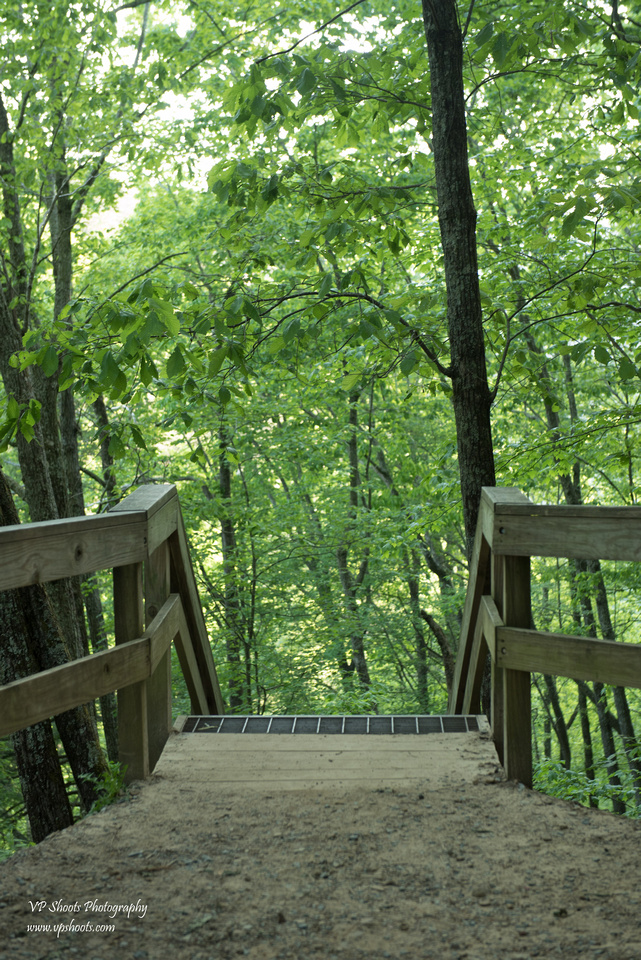 Here's the stairs.  Let's look over the edge... 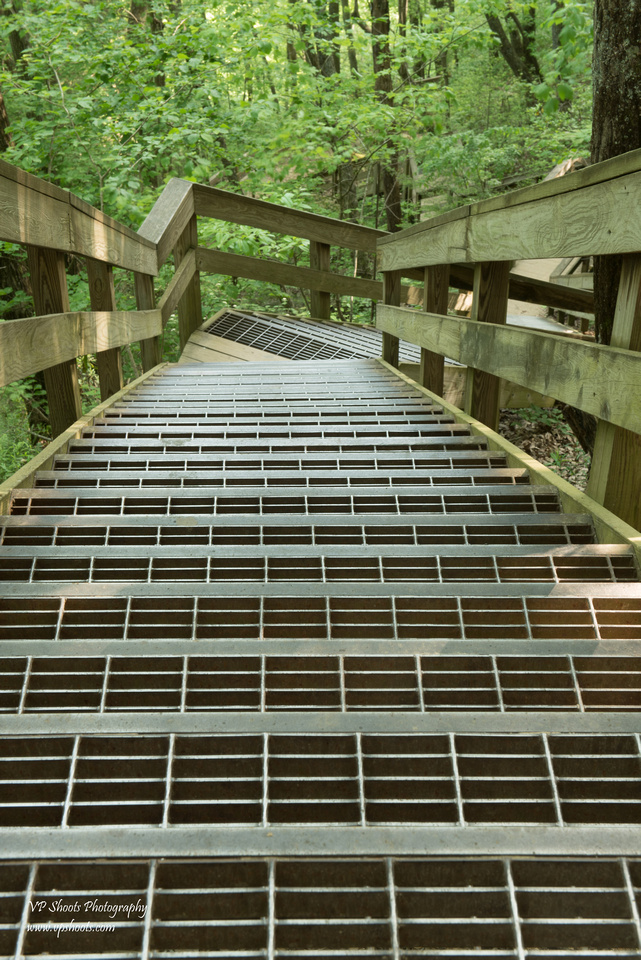 I wonder how many stairs there are?  As the dogs were not going to make this trek, I decided to go down the stairs to see the waterfall while Jim stayed up top with the dogs - they had a nice log bench there to sit and relax.  We agreed I would come back in about 30 minutes as I wasn't able to get cell service so deep in the canyon.  Down the stairs I went.  Eventually after about 100 stairs, I saw the waterfall.

This photograph was taken about 8:30 am - the sun starts to hit the waterfall between 10am and 11am (per the park ranger that was at our cabin).  This particular waterfall appears to be facing north (so my camera is pointed towards the south in this photograph). 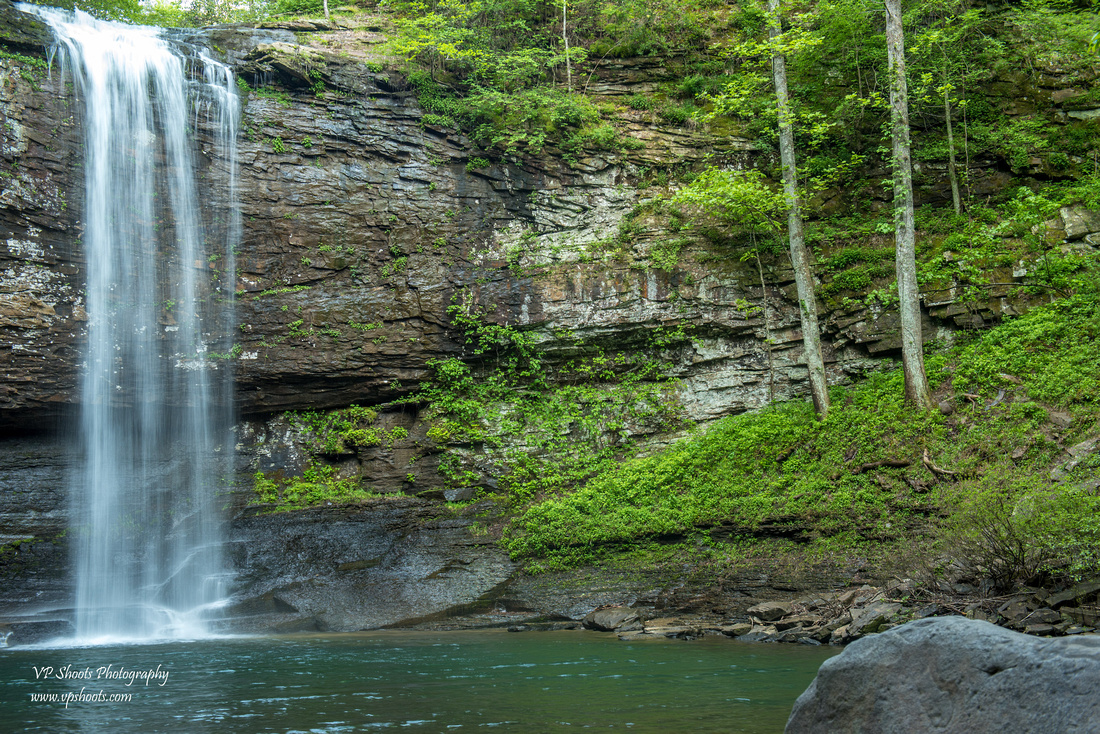 The locals mentioned that this is a popular swimming place during the summer months.  We visited on a weekday in early May and there was no one in the water at this time.  Looking to see where the water flows to after the water fall, lots of beautiful trees along the water way. 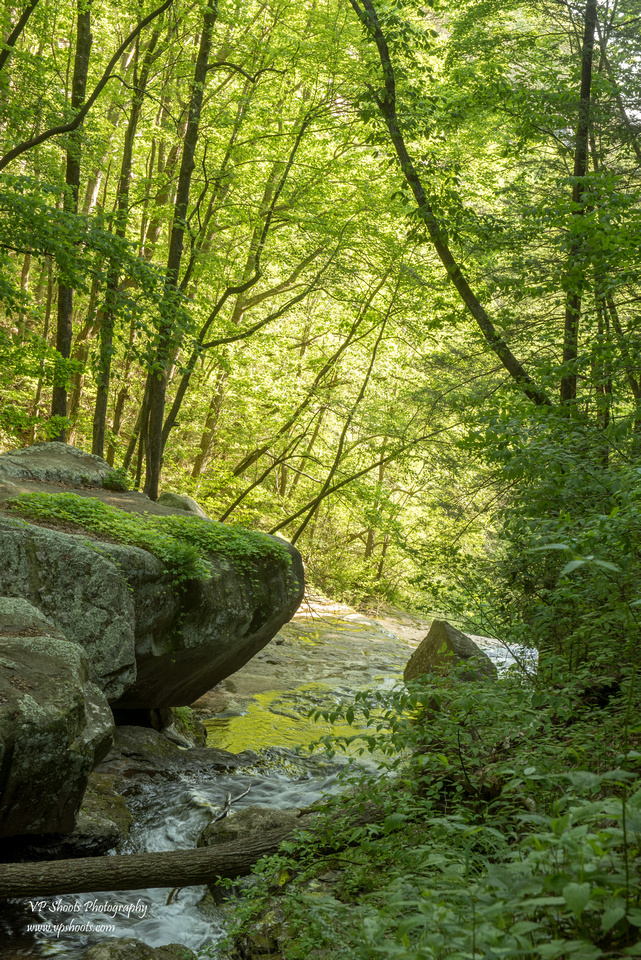 A small waterfall and flowering rhododendron along the water. 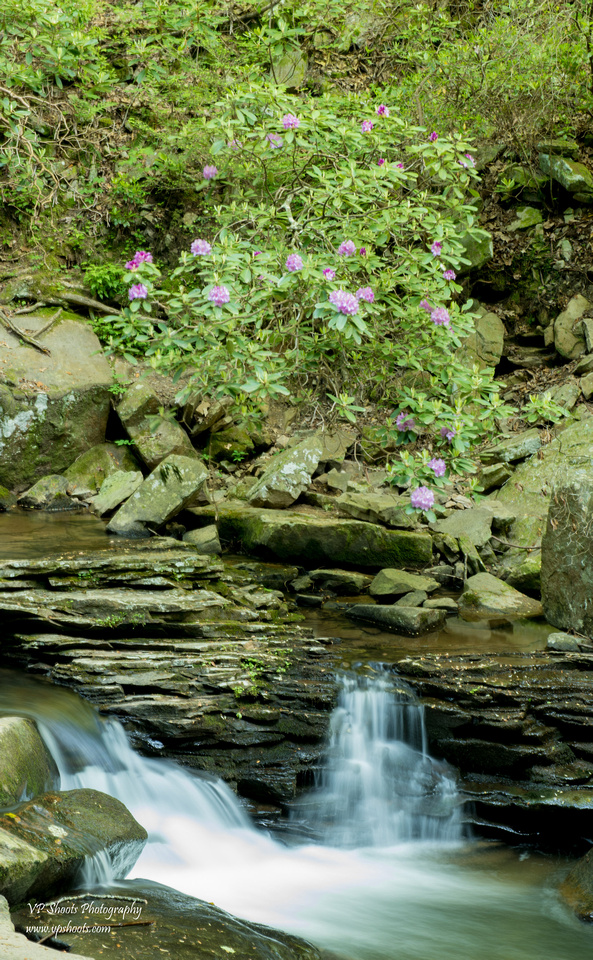 After I returned to the top, I waited for Jim to go down and view the waterfall.  Sometimes when you're sitting there all by yourself, 30 - 45 minutes can seem like a LONG time!  I played with my camera and the surroundings for a little while - made this image below (one of about 50 - but probably one of a very few I actually like).  This is made by moving the camera up and down while using a long shutter speed. 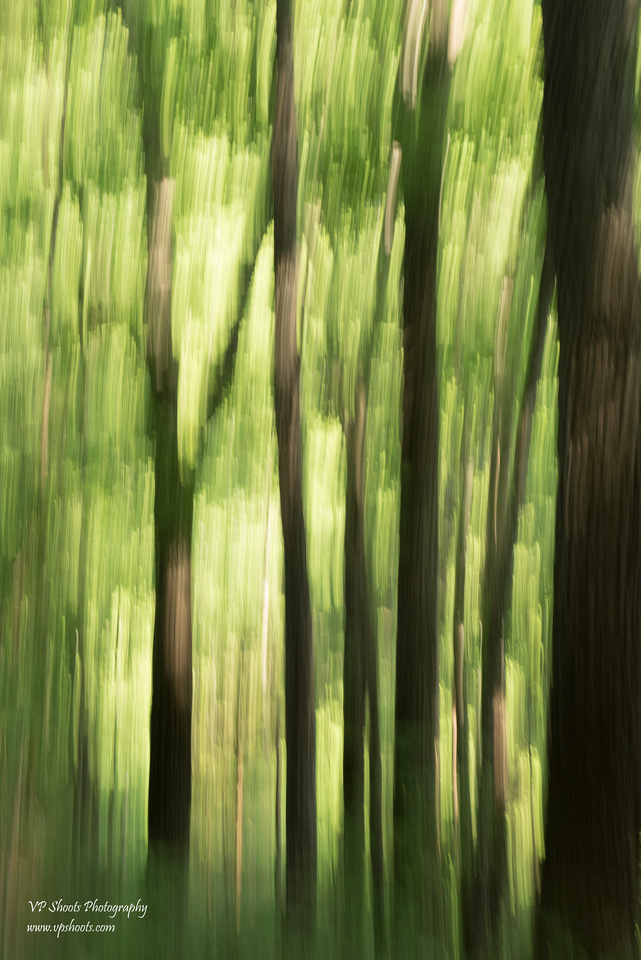 And the dogs, Jimbo and Abby, hung out with me - but they were more content to lay around as Abby settled down pretty quickly and Jimbo wasn't to far behind (but I had to untie him so he could pick a spot). 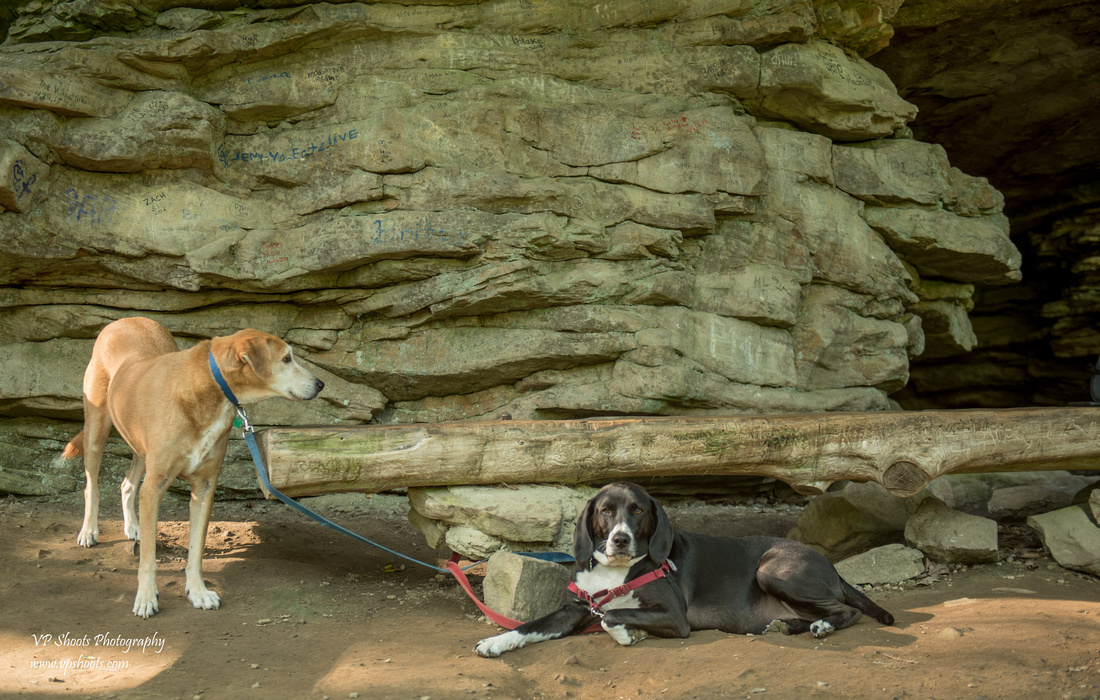 That's all for this adventure.  We have a couple more before this vacation will come to a close - so tune in next week!