This week's pet photography theme is "Multiple Perspectives".  Great thought went into all the wonderful photographs that I saw for suggestions on how to achieve this particular week's theme.  There were many great ideas, and even some that were really cool - but the reality for me was right now is it's very hot and muggy here in Florida and my dogs are panting after about 20 minutes outside most days.  Then within those same 20 minutes, I'm busy trying to get the sweat to stop enough such that my eyes aren't burning.  (Oops, women perspire, men sweat).  The other thing I realized is we have pretty well trained dogs from the perspective of don't get on that table, don't jump up, etc which eliminated several ideas.  One idea was to get Abby to climb up on the picnic table and I would get down low and shoot a photograph of her but the expression on her face was "I am not suppose to be up here, so can I get down please?" (I didn't keep those photographs).

I thought about it and figured that I could get either of my large dogs to sit on top of a hill while I shot from a low perspective.  Then of course, one has to figure out where there might be a hill nearby as west central Florida is rather flat.  My first choice was to find a hill, second choice was an outside stairway.  So here's my collection of photographs from different perspectives.  After reviewing these photographs, I realized how much I like some of these different angles and I will continue to explore this particular theme in coming months.

My first location is the park area known as the Harney Bypass here in Tampa.  They have several small hills (about 5-6 feet).  I took Abby to the top of the small hill, gave her the 'stay' command and walked back down the hill.  I laid down on the ground to include more sky and less grass in this photograph.   I noticed that Abby isn't the most graceful dog when she sits down - and she wasn't going to look down towards me either.  Those are two things we will have to try working on! 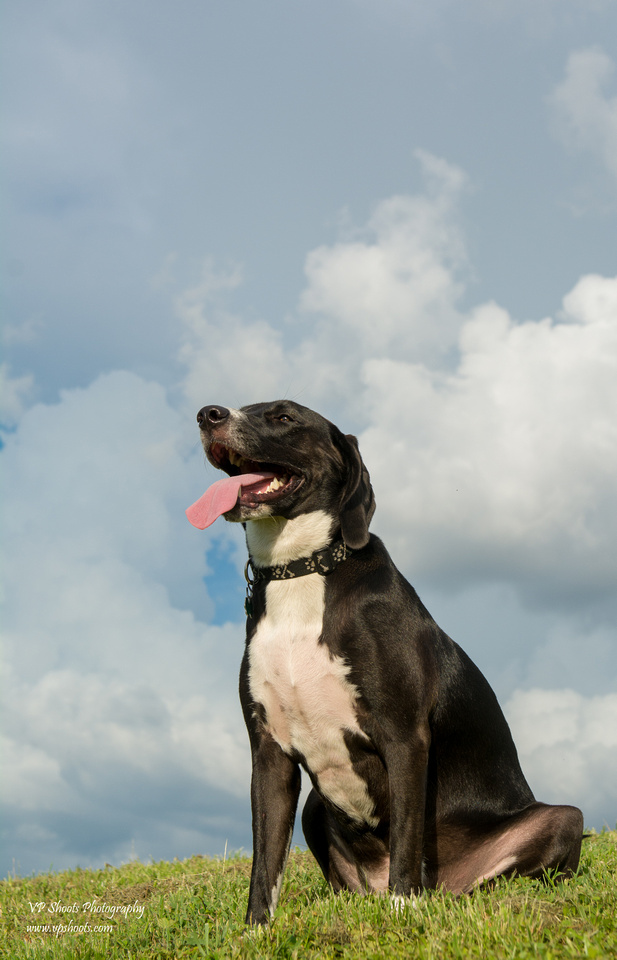 The next photograph was from the side while Abby appears to be watching a dragon fly (there were probably a dozen flying around close by).  This photograph was taken by getting down to Abby's level. 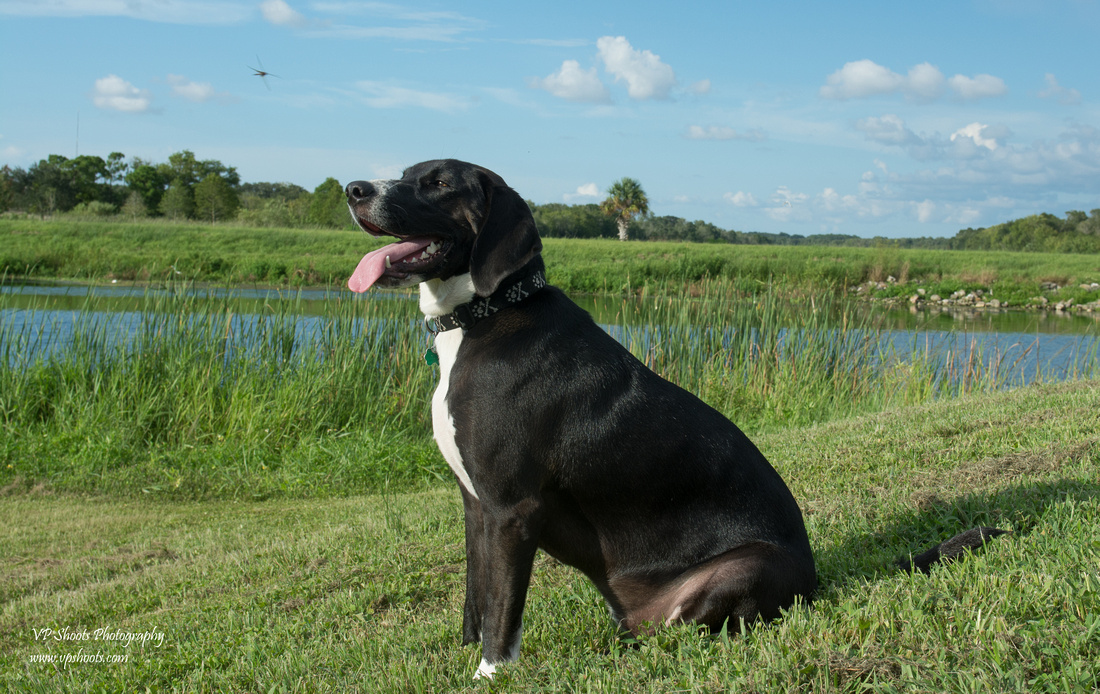 Jimbo was there too, although he stopped when he found a shady spot and refused to go on top of the sunny little hill that I had found.  The dark stormy clouds were off in the distance providing a more interesting sky for the background.  This was taken by sitting down next to Jimbo (you can see the hill behind Jimbo that I had Abby sit on). 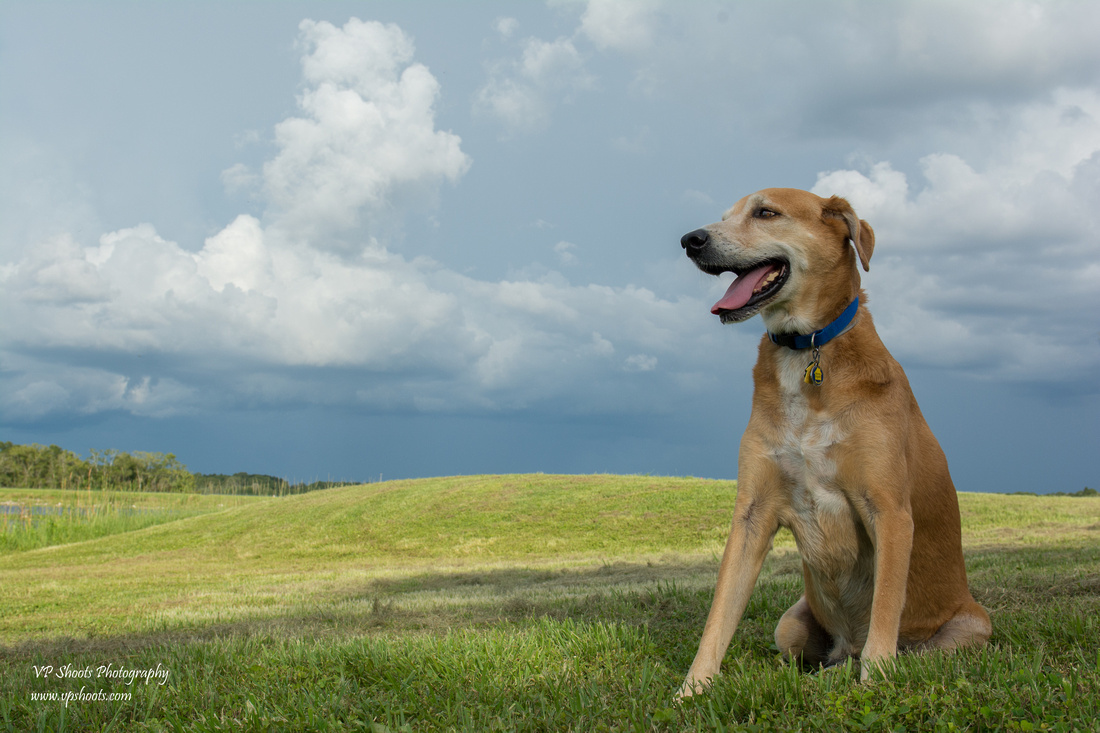 For the next photograph, I got more behind Jimbo and down to the ground so I could shoot the photograph showing only sky in the background. 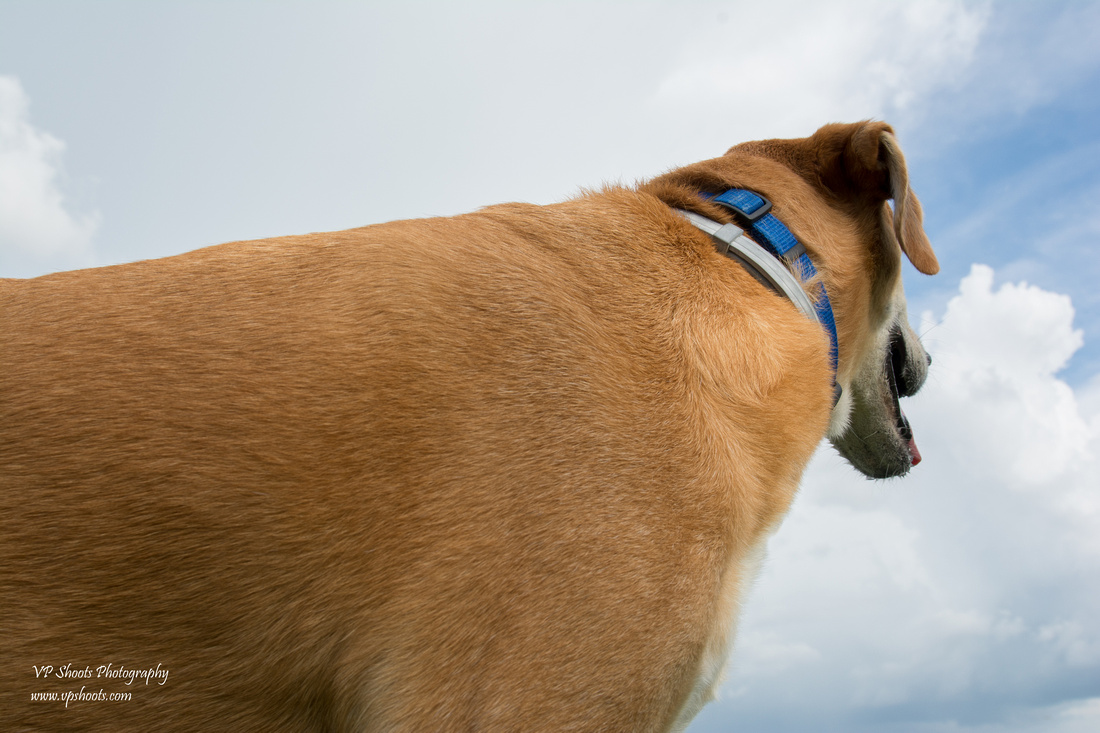 In the last photograph from this location shoot, I got behind Jimbo, including most of his body from the back and showed the perspective of what Jimbo is looking at from close to his level. 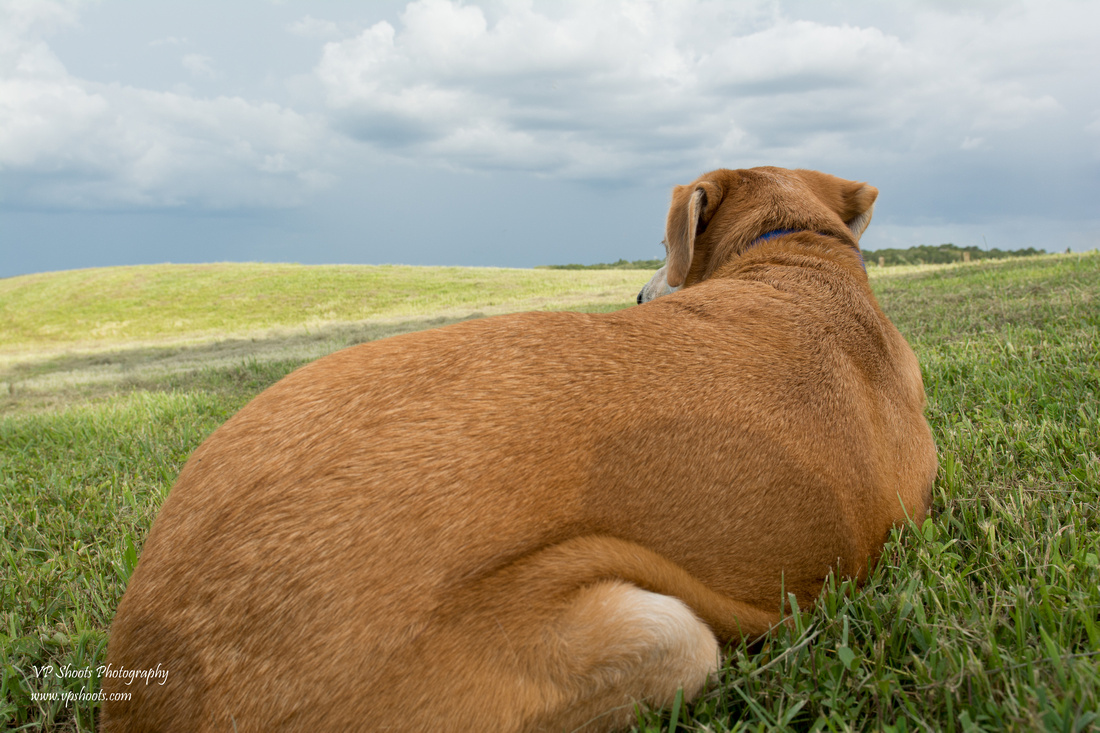 Back of a dogViewing the back of Jimbo, our Bahamas' dog

Our next location, we traveled over to Safety Harbor, Florida and visited Philippe Park.  This is a very nice park to spend the day, but today it was 85 degrees and it wasn't 9:00 am yet.  They have an Indian mound with lots of stone stairs that I thought would provide some great perspectives to the dog portraits.  Here's Jimbo standing on some of the stone stairs that lead to the memorial for Odet Philippe whom the park is named after.  I stayed down below to shoot this photograph of him from below.

Abby sitting on the stone stairs that lead to the top of the Indian mound at the park.  I noticed that Abby seemed to settle on two steps this time instead of putting all four feet on the same stair (whatever works to keep her in a stay position!). 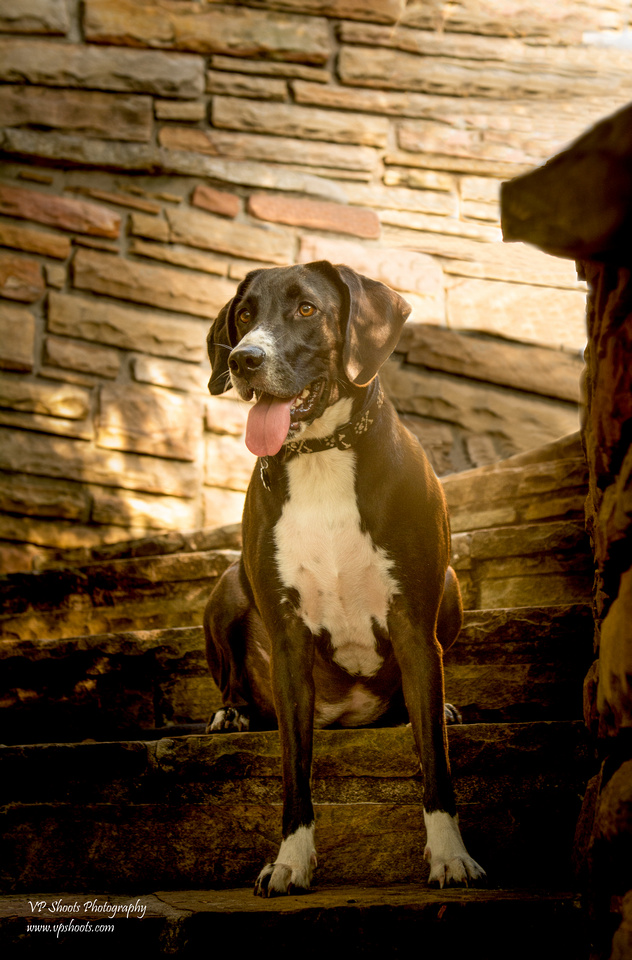 Here's another one on the stone stairs where I changed my angle and moved in a bit closer. 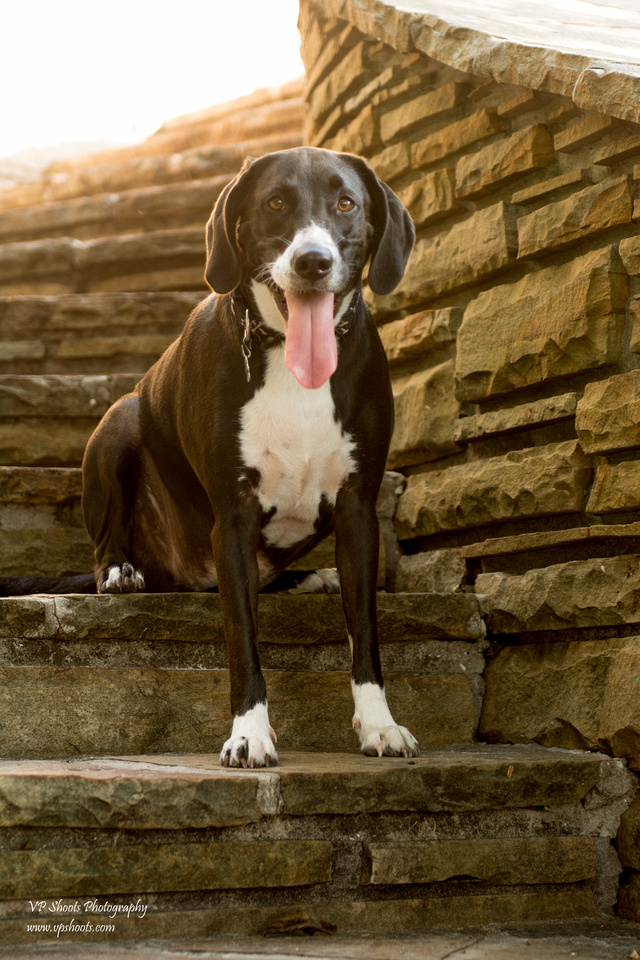 The last one, Jimbo had laid down on the stone steps to relax and I got down in front of him to photograph his face gently resting on his paw. 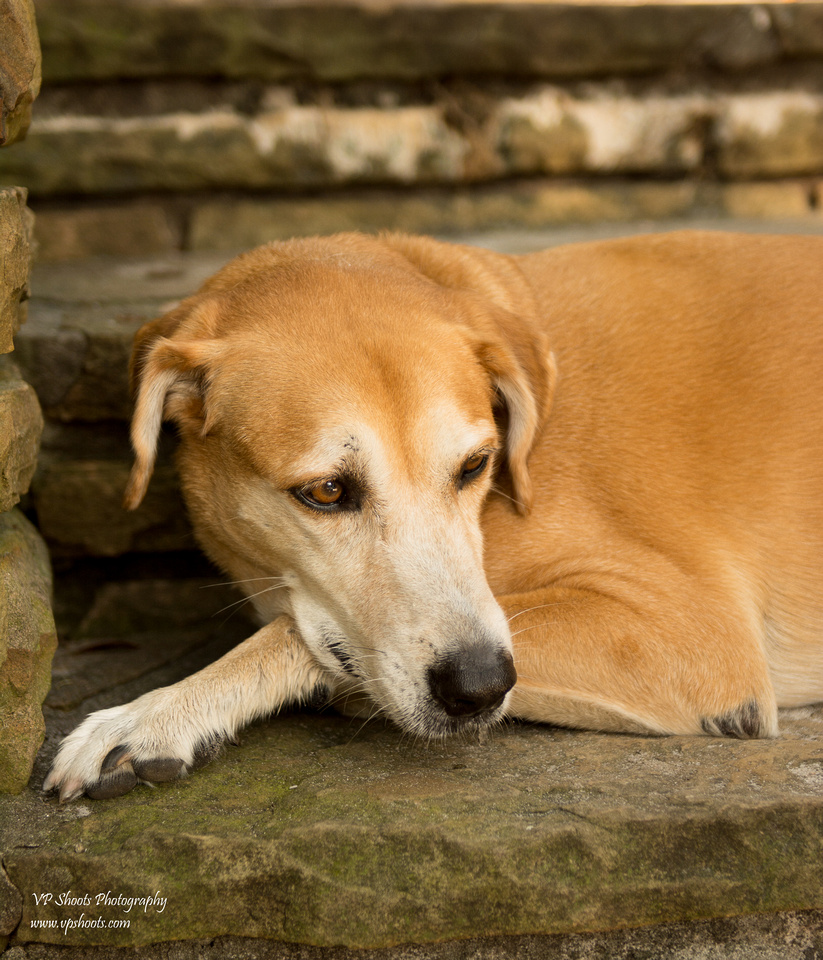 For those of you that love your pets and treat them as a part of the family - make sure you capture those special moments as one day, they will be your treasure to remember you friend.  For more 'multiple perspective' pet photographs head over to visit Pet Love Photography, serving Greater Cincinnati and the San Francisco Bay Area.  and then head around the rest of the blog circle until you end up back here.

If you would like to book a custom pet portrait session, send an email to Linda at [email protected] or give us a call at 813-610-2671 in the Tampa Bay area (Florida).  Special discount if you're looking for an 'end of life' portrait.

Darlene(non-registered)
It's so hot and humid in Massachusetts, I can't imagine what FL is like! Lovely variety of images! Love Jimbo's perspective on his view. My favorite is the first image of Abby on the stone stairs - gorgeous light!
Elaine(non-registered)
I love your work here. Such great examples. The third photo is my absolute favorite, but everything you've done is beautiful!
Kim Hollis(non-registered)
I really like your first location choice and the photo of Jimbo with the stormy clouds in the background. I also like Abby on the stairs.
Susannah(non-registered)
I really like that one shot from behind Jimbo featuring the sky. That's a great example of a different perspective. The stone stairs are a great location. I love how Abby sits, so funny.
Jodie Pholi(non-registered)
Great images, Like how you showed from the dogs perspective as well.
No comments posted.
Loading...
Subscribe
RSS
Recent Posts
Happiness is....spending time with your fur kids (aka, dogs) What kind of dogs are they? Tampa's Riverwalk is dog friendly! Photography session with a large dog named Buck Dog friendly lakes, Western North Carolina A walk at dog-friendly Lettuce Lake Park in Tampa, Florida St. Patrick's day dress up for the dogs Photographing for local pet rescue Number one reason to have photographs taken with your pet Dog Photography, People Photography, Wedding Photography - a look back at the year 2021
Keywords
canine dog vpshoots outdoor pet photography Florida dog photography pet photography blog park rescue
Archive
January February March April May June July August September October November December
© VP Shoots Photography
User Agreement
Cancel
Continue