What kind of dogs are they?

What Kind of dog do you have?

The most often question I have been asked when walking my dogs is "What kind of dogs are they?".  I have to admit, for a good while my answer was "One with four legs".  I was clueless what exactly my dogs were, other than "My dogs" - shared with 'Pop' also known as Jim.  All of our dogs came from the rescue we photograph the most for, Maxx and Me Pet Rescue - all of them are mutts.  They are mixed breed, who knows what they are - but they are our little fur kids.

Here's each one the day we met them as we were asked to photograph each of them for the Maxx and Me Pet Rescue.

Abby was approximately 6 - 7 months of age.  She came into the rescue from Starke County, Florida. Known for the jail - a town located in central Florida that we have passed through many times travelling Highway 301.  She came to us because it was thought that she might have kennel cough, she didn't have a foster lined up and with the possibility of having kennel cough, she could not go to boarding.  Our sweet Jimbo was kind enough to let her come to our house and stay - but he made it clear - you have to train her, I'm not (and yes, this was Jimbo, our dog, telling us this). 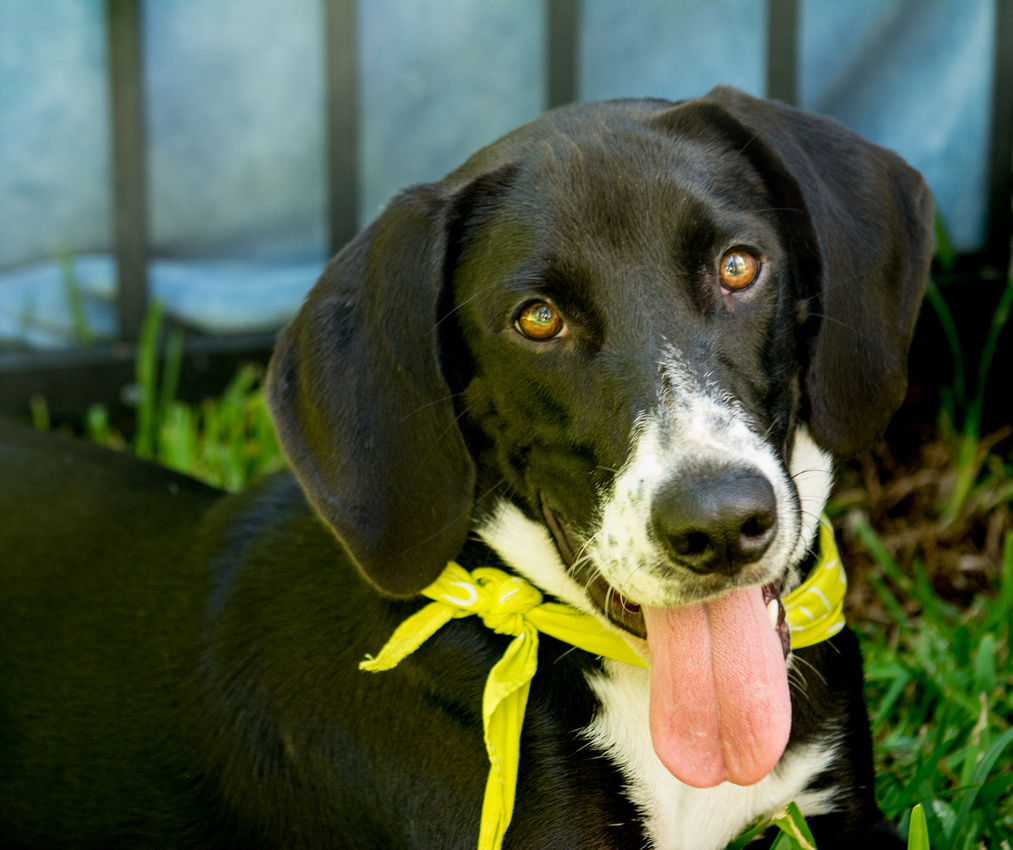 A litter of 4 puppies came into the Maxx and Me Pet Rescue.  They were little - real little.  They came from northern Florida, areas where often a good number of dogs are not given an opportunity to live.  Maxx and Me Pet Rescue grabbed this little litter of puppies, having survived parvo and brought them to Tampa.  They didn't have a foster - they were all placed in a boarding facility.  In September (just after Hurricane Irma) we were asked to photograph these cuties.  As there were 4, and Hurricane Irma recently came to our area - Irma has 4 letters - each letter was used to come up with names for these puppies.  Ollie was first known as "Irma". Rue was named Rue (and stayed as Rue).  The other two puppies took the letters M and A (I don't recall their names).  I couldn't call a little puppy "Irma" so in time with various fosters - she was renamed to Ollie by someone else and oddly enough that is my father's middle name and the name my grandfather went by.  Strange circles.....

Rue - the toughest puppy of all 4 to photograph! 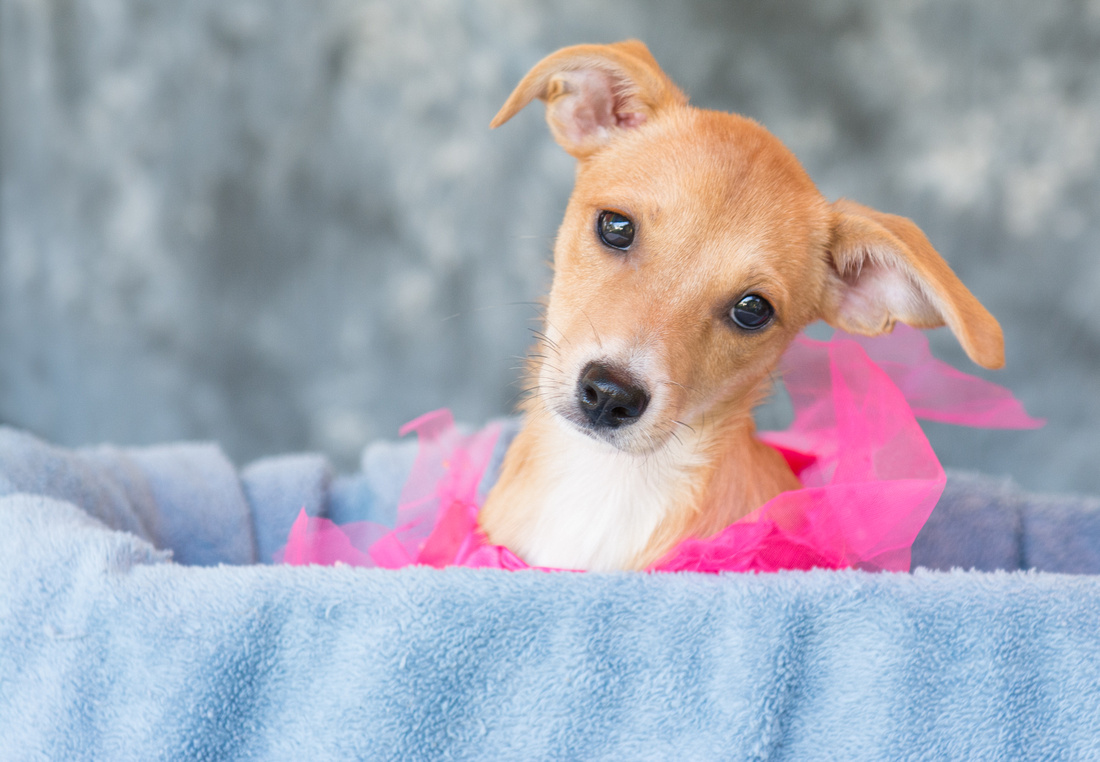 Ollie - the easiest of the puppies to photograph 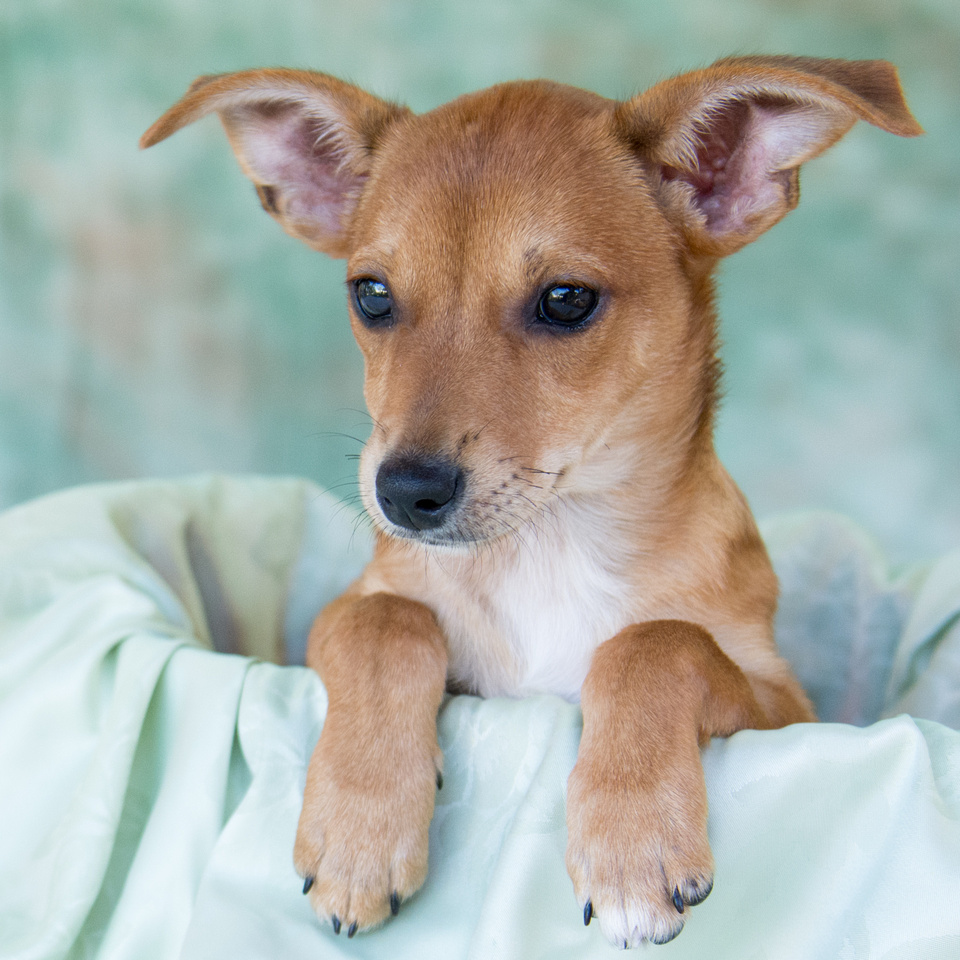 Abby is definitely hound - look at those ears?  But what are the various breeds that make Abby "Abby"?  Well, everyone knows she has some form of hound(s) in her - her looks say that.  She loves the water, she is very good at tracking us and even better at tracking Jim!  She doesn't let her Pop get to far away and if he does, well it's nose to the ground.

So what is Abby's DNA telling us?  No surprises for the most part for me!

What was a little more surprising is that Abby has a sister that has tested (also lives in Florida, sharing 55% of her DNA) named Madison.  She also has 2 other close relatives named Charlie and Utah! 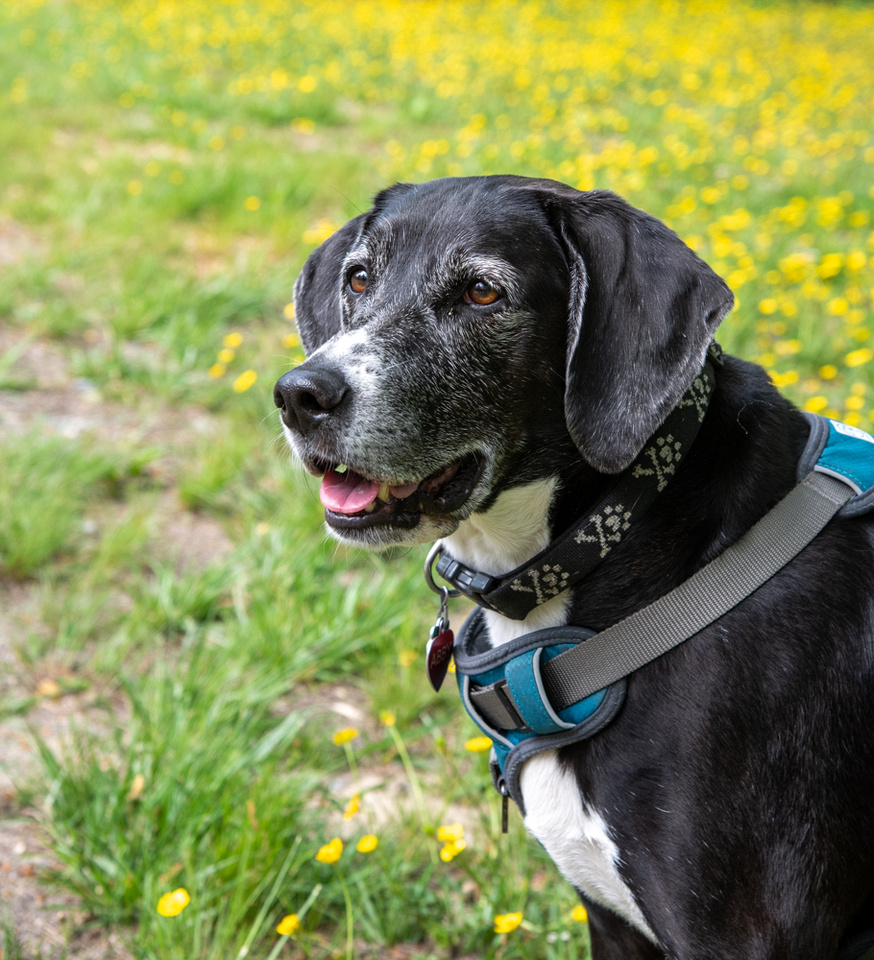 These two girls are from the same litter - and they look very similar.  People ask how we can tell which is which.  Here's the rundown of the differences.

1) Ollie has an extra dew claw on her hind foot

3) Ollie is redder than Rue

5) Ollie is shorter and stocky; Rue has longer, thinner legs

Oh - and Ollie usually has a red collar on and Rue has a yellow green collar.  I as the "mom" can tell my twins apart just like any other parent can tell their twins apart - they each have slight differences.

Any guesses on what these girls are?  Everyone says they are unique - but no one guesses what their DNA hides....

While Rue and Ollie did have a few relatives listed they did not have any close relatives :(

Just in case you are curious, the girls have one surviving brother who has fur similar to the shephard breeds they have in their DNA and they also have a sister that has piercing blue eyes!

DNA Results for my dogs 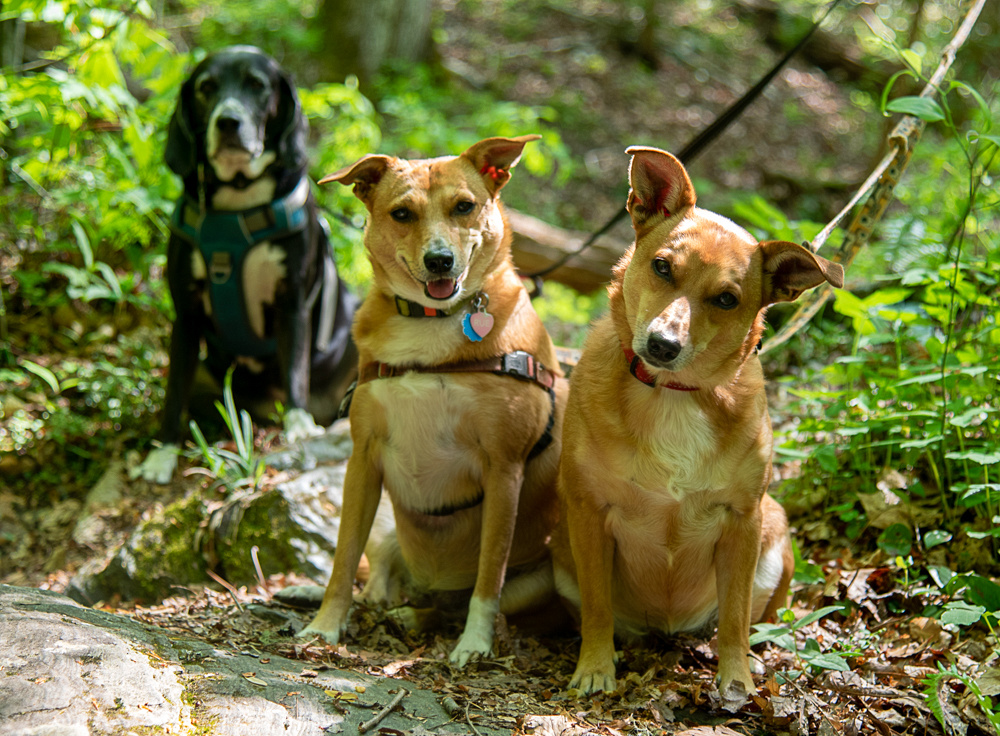 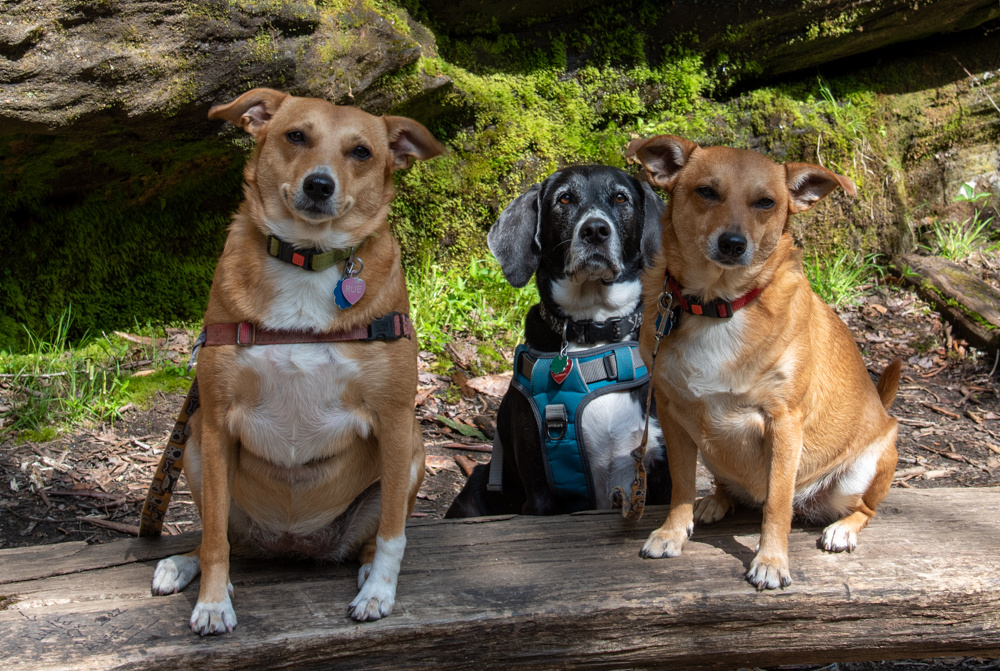 My dogs DNA was tested using the Wisdom Panel.  This is one of several companies that perform this particular type of test.  Another company, Embark, does DNA testing for dogs (and cats).  In the near future, I would like to try Embark to compare the results and determine how similar (or dissimilar) they might be.  Hopefully, the results will be similar, otherwise I might question exactly how the process is being performed and what the accuracy of the results is.

If you would like to discuss or book a custom pet portrait session, send an email to [email protected] or give us a call/text Linda at 813-610-2671 in the Tampa Bay area (Hillsborough/Pinellas/Pasco/Polk counties in Florida).  We have flexible rates and packages to fit most everyone’s budget as we believe that having wonderful photographs of your pet is important to so many people.

This is a personal project that I try to participate in each week (as much as possible).  This post is part of a 'blog circle' which is with several other Professional Pet Photographers around the world.  Each week a different theme is provided to the group and we, as pet photographers, interpret the theme in our own way.  Follow the link provided at the end of each of my blogs to the next pet photographer's blog - and when you arrive back at my blog - you've completed the entire circle of blogs for this theme.  For more pet photographers sharing their take on this theme, head over to Massachusetts dog photographer Darlene Woodward of Pant the Town Photography shares the DNA ancestry results of her rescued mutt, Kota.

Darlene(non-registered)
They are stunning!!! Chow... yes, those Chows get around a bit haha! Love seeing the results. And poodle in the little ones! Do you notice any poodle characteristics? Thanks for sharing the results !
Elaine(non-registered)
Your dogs are adorable! Thanks for sharing their stories.
Kelly(non-registered)
That's really amazing that they can find relatives of your dog through the DNA test!! That's more incentive for me to try it with my dogs. When I'm out walking my dogs, (they are pittie mixes) people always stop me to ask about them being pitbulls. I always say they're just my dogs, breed doesn't really factor into it at all. :)
Nicole(non-registered)
Ollie and Rue, OMG! <3
The DNA results are so fun. I always laugh about Chows showing up so frequently. Chows must have had a good run at some point. lol
Tracy Allard(non-registered)
Wow, Abby really is a Heinz 57 dog and I did not see the Australian Shepherd coming for Ollie and Rue, what a surprise (and their puppy pictures are ridiculously cute!).
No comments posted.
Loading...
Subscribe
RSS
Recent Posts
Waterrock Knob Overlook, Blue Ridge Parkway Letting go, memories after your dog (pet) crosses the Rainbow Bridge Happiness is....spending time with your fur kids (aka, dogs) What kind of dogs are they? Tampa's Riverwalk is dog friendly! Photography session with a large dog named Buck Dog friendly lakes, Western North Carolina A walk at dog-friendly Lettuce Lake Park in Tampa, Florida St. Patrick's day dress up for the dogs Photographing for local pet rescue
Keywords
canine dog vpshoots outdoor pet photography Florida dog photography pet photography blog park rescue
Archive
January February March April May June July August September October November December
© VP Shoots Photography
User Agreement
Cancel
Continue