Ever wonder why some photographs you can see everything in the background crystal clear and others it’s just a creamy blur?  Well, that’s what this week’s pet photography blog is about.  In this particular case, we are looking for a 'deep depth of field'.  What does this mean? Well, it means a lot of the photograph is in focus.  This long boardwalk and the trees in the background are all in focus - this gives a greater amount of depth of field.  I know, there's no dog in this photo - it was almost freezing and they were hanging in the truck.  If you're curious, this is near Cedar Key, Florida and is called Shell Mound. 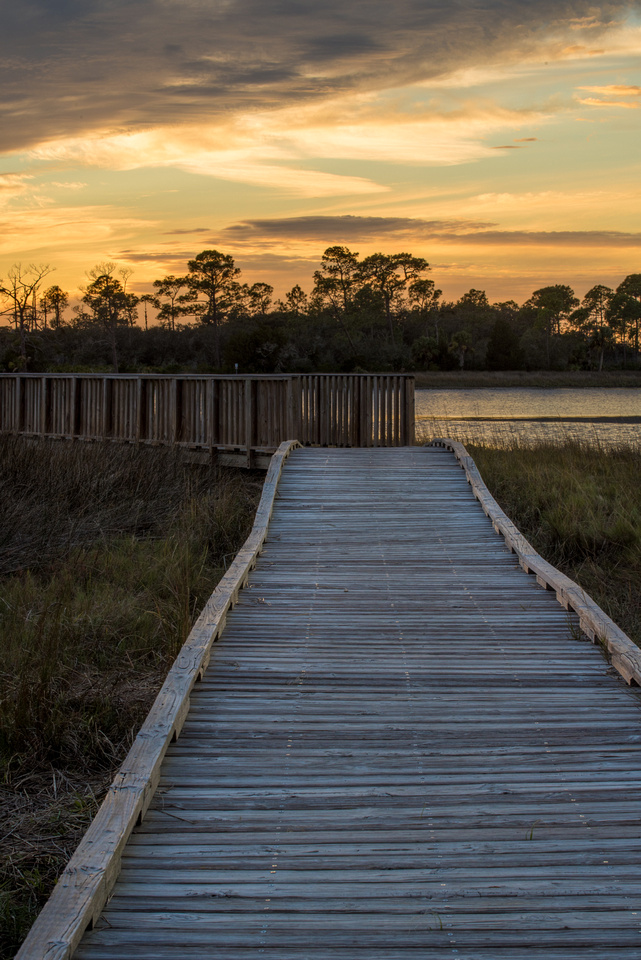 Background blur is an excellent tool that will separate your subject from the surroundings and is often used to make the subject pop out.  The photographic term for this is called ‘depth of field’.  Most people think of the ‘depth of field’ as being controlled by the aperture or f-stop for the old timers.  The larger aperture number on the lens, the better chance of getting some great details in the background of your image.  However, there is one other factor that also comes into play and that’s the ‘focal length’ of the lens used to capture that photograph.  Let’s explore these two concepts and see how they impact a portrait of your favorite animal.

This is one of the three parts of the ‘exposure triangle’ that a camera uses to create ‘proper’ exposure.  For this blog post, we are only discussing how the aperture impacts your photo.  Photography Life defines aperture as follows: “Aperture can be defined as the opening in a lens through which light passes to enter the camera. It is an easy concept to understand if you just think about how your eyes work. As you move between bright and dark environments, the iris in your eyes either expands or shrinks, controlling the size of your pupil.  In photography, the ‘pupil’ of your lens is called aperture. You can shrink or enlarge the size of the aperture to allow more or less light to reach your camera sensor.” (https://photographylife.com/what-is-aperture-in-photography)

In newer lenses this is not as common to see, but with older lenses (or perhaps a lensbaby lens) you can see how the hole in the camera lens gets larger or smaller.

Before the world of digital cameras came on the horizon, apertures were a set of numbers such as 1.4, 2, 2.8, 4, 5.6, 8, 11, 16, etc usually the highest value is at least 22.  If you look at these aperture numbers, you will see a pattern.  The first number is 1.4, the second is 2.  The third is 1.4 x 2 = 2.8. The fourth is 2 x 2 = 4. Do you see the pattern?  Now with digital cameras, each aperture can be split into thirds – so we can increase the aperture a third of a stop or decrease the aperture a third of a stop.  This gives a finer degree of control, but probably makes very little difference in the amount of blur in the resulting photograph.

So, now you know the formula for remembering the various ‘true’ apertures on a camera.  But how do you remember which is ‘wide-open’ giving a beautiful blur or ‘closed down/stopped down’ giving details in the background?  For me, I always think of the aperture numbers as fractions and then think about a pie!  If I am getting ½ of the pie that’s a whole lot bigger than getting 1/16 of the pie – right?  Apply this little technique to your aperture and you’ll remember without any issue.

Background blur is an excellent composition tool to set your subject apart from their surrounding areas. It’s another way of saying “minimum depth of field”.  Sometimes you want everything in focus, if that's the case - then you need to think about using larger aperture numbers which translates to having a smaller piece of that pie I mentioned earlier. 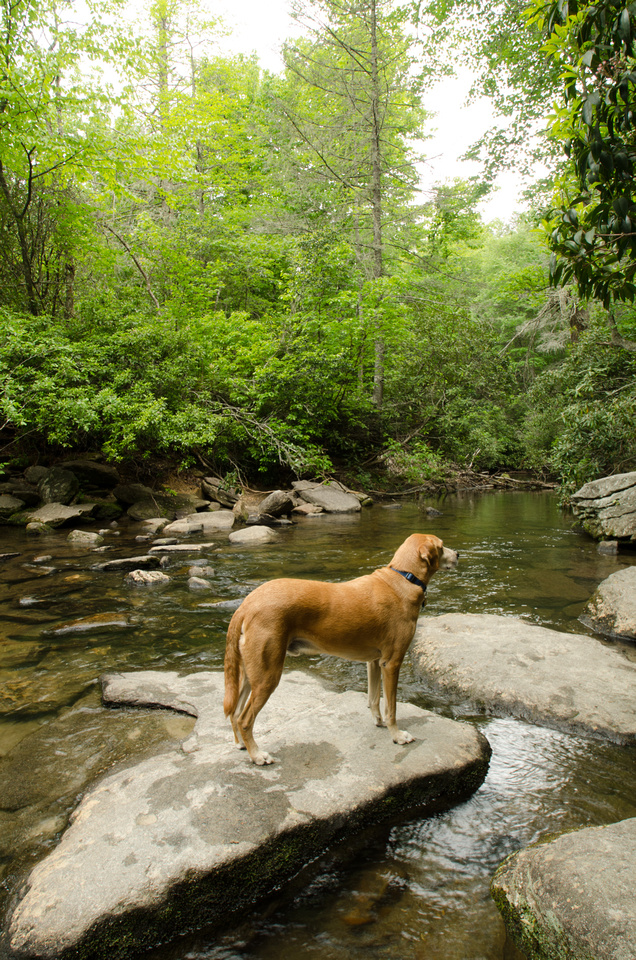 Jimbo was a great hiking buddy as he could be trusted to stay with us regardless of whether he was on leash or just hanging out when we were photographing the sights.  In this case, Jimbo is watching Jim who is just outside of the area the camera is capturing.  A wide angle lens (14mm F/9.0), a smaller aperture and the scene all comes into focus. 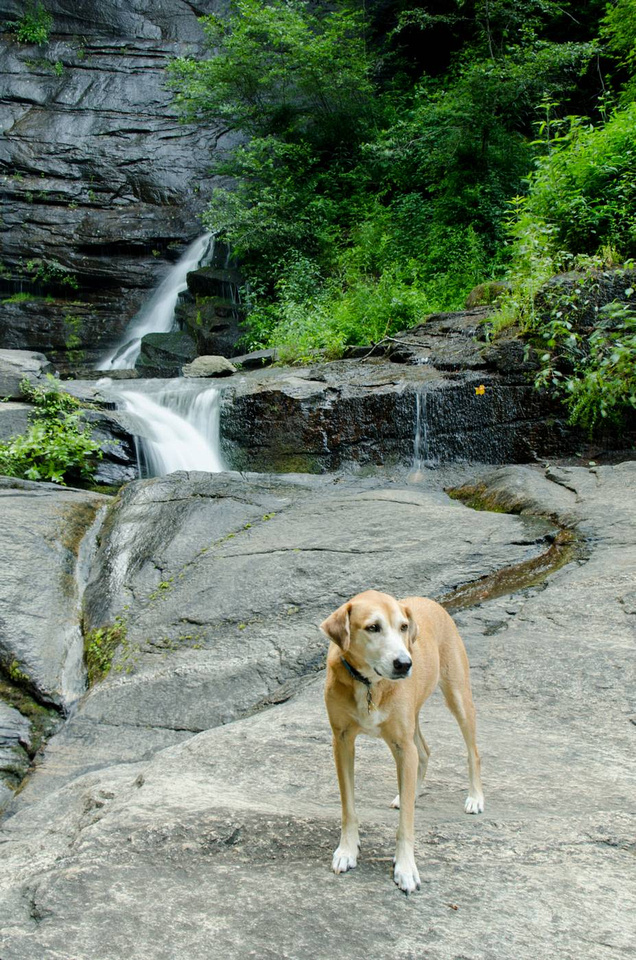 Yep - it's Jimbo at another waterfall in North Carolina.  A wide angle lens allowed for getting him as well as the waterfall in the background all in the same photograph (27mm, F/8.0).

The second part of this is all about the focal length of your lens.  The human eye sees things in the world at approximately 50mm focal length.  Hence, the reason that the nifty 50mm lens used to be the standard lens that everyone started using when they purchased a new camera.  Now, people usually get a zoom lens that has a range of focal lengths and most of the time 50mm is somewhere in that range.

A lens that is larger than 60mm is considered to be a telephoto, although 60mm is a very short telephoto – and the more common zoom lenses are 70-200mm in focal length.

Most of my photographs of dogs are taken with a longer focal length.  The most common is between 70mm and 200mm.  Here's some samples of different photographs and the aperture/focal lengths associated with each.  On the shorter side for the focal length, using a 'super wide focal length' just about everything will be in focus. 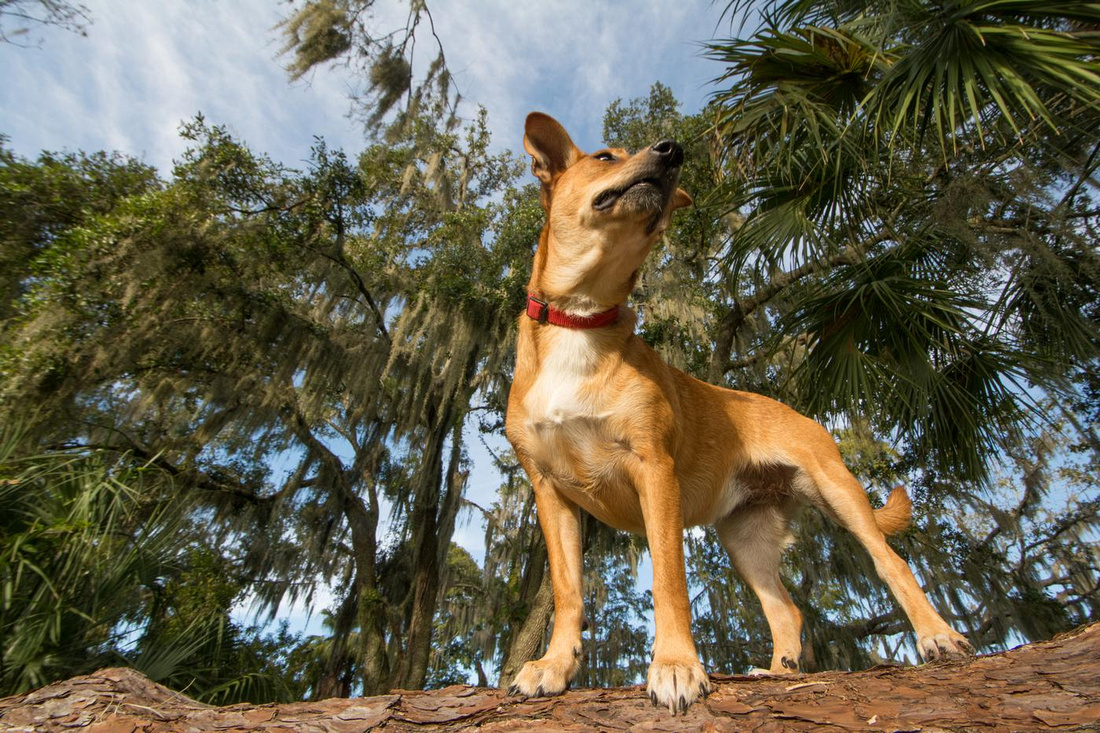 Ollie - 10mm, F/9.5 Superwide focal lengths can give a very unique and different perspective.  It also gives you a deeper depth of field as just about everything regardless of the distance from the lens will be in focus. 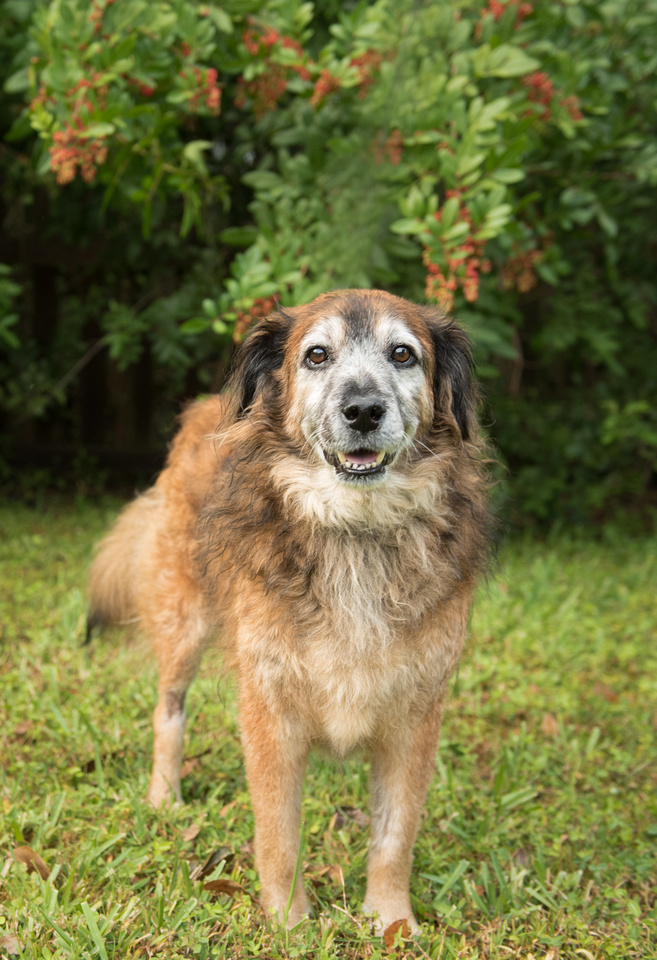 Maximo - 35mm, f/4.5 - wide angle, has little blur in the background - but still a fairly good amount of depth as we in Florida know that tree behind Maximo is a Brazilian Pepper plant (invasive and everywhere). 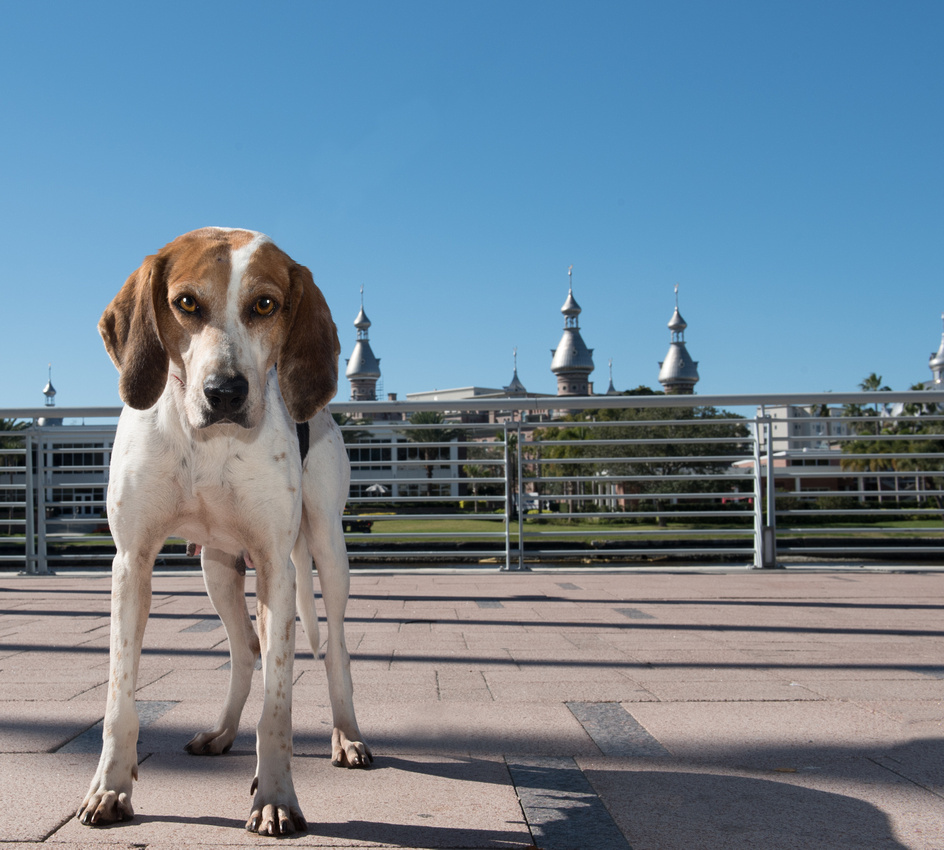 Nana, 35mm f/18 - A smaller aperture was used because it was bright sunshine and the background is iconic in the Tampa (University of Tampa). 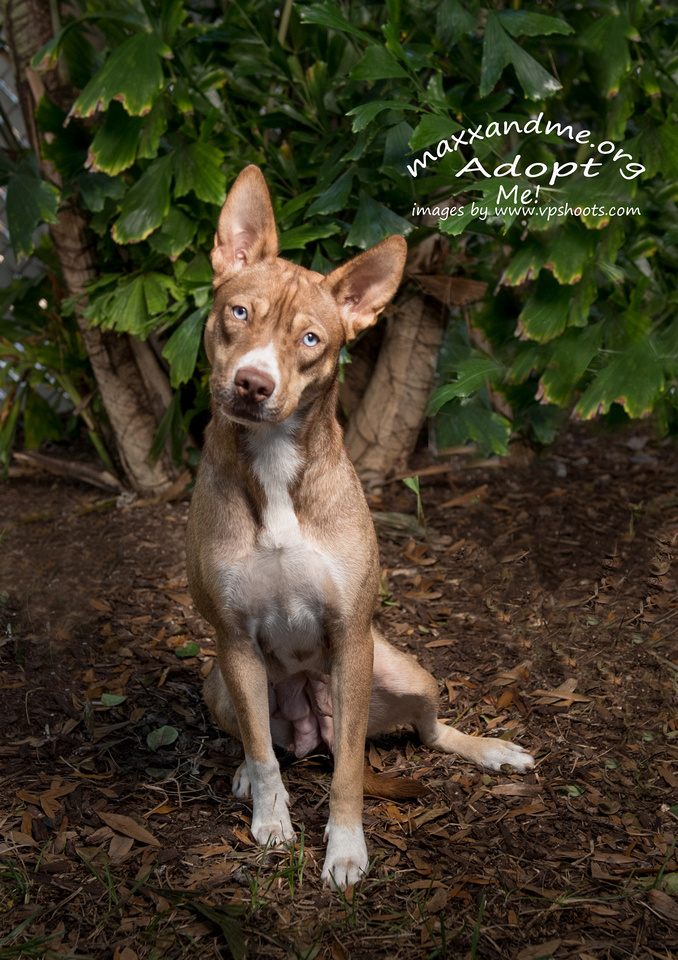 Salem - 42mm, F/5.0 - Using a shorter focal length and an aperture that provides some depth of field gives a little softness in the background but still able to determine all the plants in the photograph. 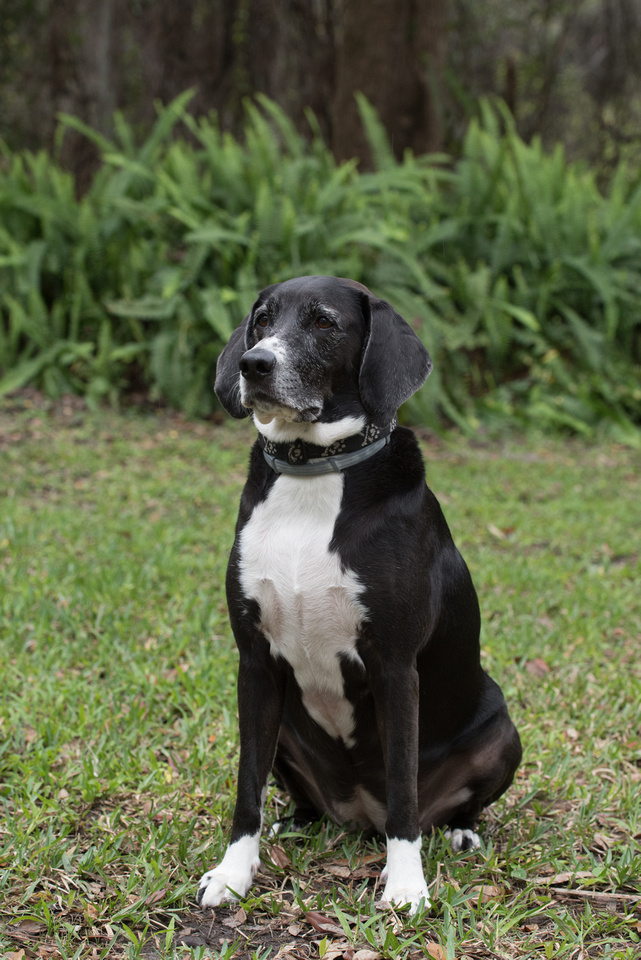 Abby - 80mm, F/6.3 (nothing changed except the aperture - look at the difference in the ferns behind Abby) 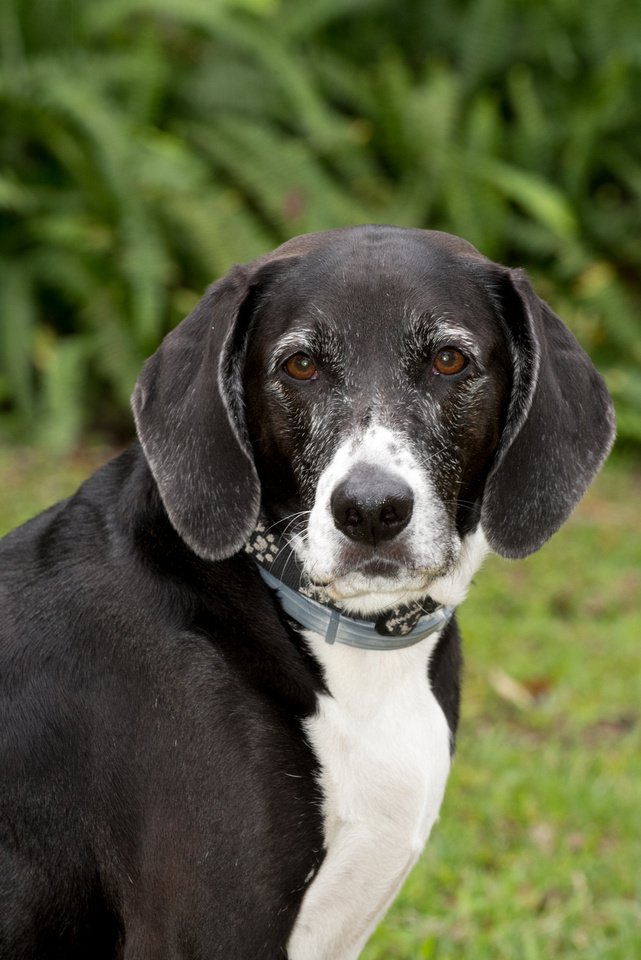 Abby - 170mm, F/11 - Changing the focal length (Abby nor I moved between these photos and the ones at 80mm) creates a lot more blur in the grass and ferns behind her. 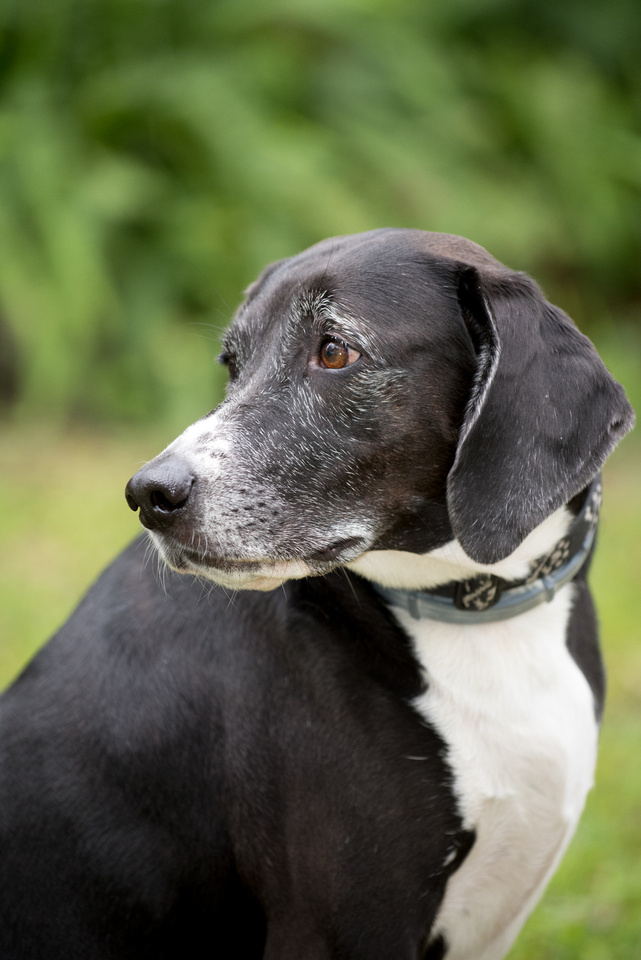 Abby - 170mm, F/4.5 - the blur has increased enough to create creamy blur without being able to determine the plants (ferns) in the background. 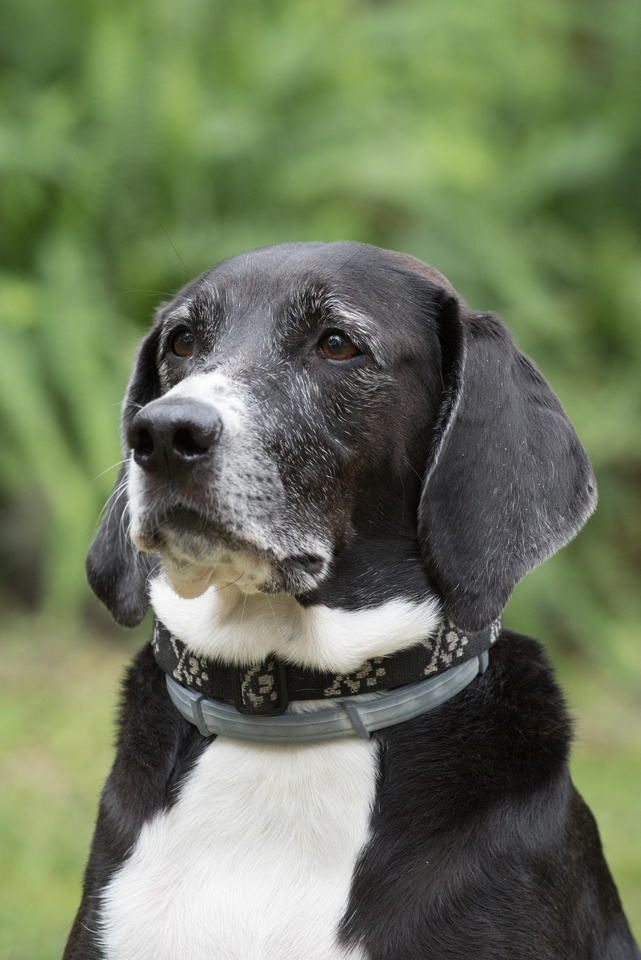 Most of the photograph in focus

That's it for this week's pet photography blog.  For more pet photographers sharing their take on this theme, head over to visit Elaine Tweedy of I Got the Shot Photography, serving pets and their people in Northeastern PA and surrounding areas.

If you would like to book a custom pet portrait session, send an email to [email protected] or give us a call/text Linda at 813-610-2671 in the Tampa Bay area (Florida).

Tracy Allard(non-registered)
I think I might miss Jimbo as much as you do! I choked up a bit when I saw him in the first image and it was perfect to end with portraits of Abby. Terrific explanation about "the other" method of controlling background blur - we so often forget about distance of the subject to the background and distance of the subject to the camera - well done!
Elaine(non-registered)
So well done in your description and examples. I love seeing Abby.
Nicole Hrustyk(non-registered)
That boardwalk is beautiful!! Excellent blog topic!
Angela Schneider(non-registered)
That superwide of Ollie is killer! I love it.
Danyel Rogers(non-registered)
Those first images make me want to go hiking. What an in depth description. Nicely done.
No comments posted.
Loading...
Subscribe
RSS
Recent Posts
Waterrock Knob Overlook, Blue Ridge Parkway Letting go, memories after your dog (pet) crosses the Rainbow Bridge Happiness is....spending time with your fur kids (aka, dogs) What kind of dogs are they? Tampa's Riverwalk is dog friendly! Photography session with a large dog named Buck Dog friendly lakes, Western North Carolina A walk at dog-friendly Lettuce Lake Park in Tampa, Florida St. Patrick's day dress up for the dogs Photographing for local pet rescue
Keywords
canine dog vpshoots outdoor pet photography Florida dog photography pet photography blog park rescue
Archive
January February March April May June July August September October November December
© VP Shoots Photography
User Agreement
Cancel
Continue