Crystal River, Florida is known for it's beautiful springs, clear water and manatees.  We visited with some friends last week and enjoyed swimming in the cold water while we had unseasonably hot weather for this time of year (reaching the low 90's in November).  Jimbo hung out with a chocolate lab named Gracie. Gracie loves to swim, Jimbo did it because he saw land very close and it was the only way to get there!  Here's the two dogs after a short swim in one of the springs.  This photo was taken near Hunter Springs in Crystal River.

Adobe Lightroom has a 'map' feature that will pinpoint where the photo are taken when GPS coordinates are captured for the photo using Google Maps.  This screen shot shows the mapping feature for Hunter Springs in Crystal River.  The orange 'flags' indicate where pictures were taken and the number of photos (for example, 6 indicates that 6 pictures were taken with these GPS coordinates). 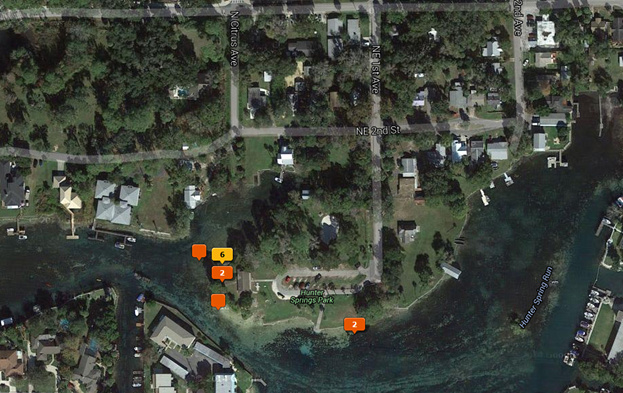 The below map shows the location of Three Sisters Springs along with the 'orange flags' for where pictures were taken. The most amazing spring that I swam in is Three Sisters Springs - this is a protected area that allows non-power boats and swimmers.  Here's a few pictures we took of the clear spring water outside of the entrance to the spring. Using the Nikon Coolpix AW100 camera, Jim captured this video of Three Sisters Springs. This the entrance to the spring from the river.